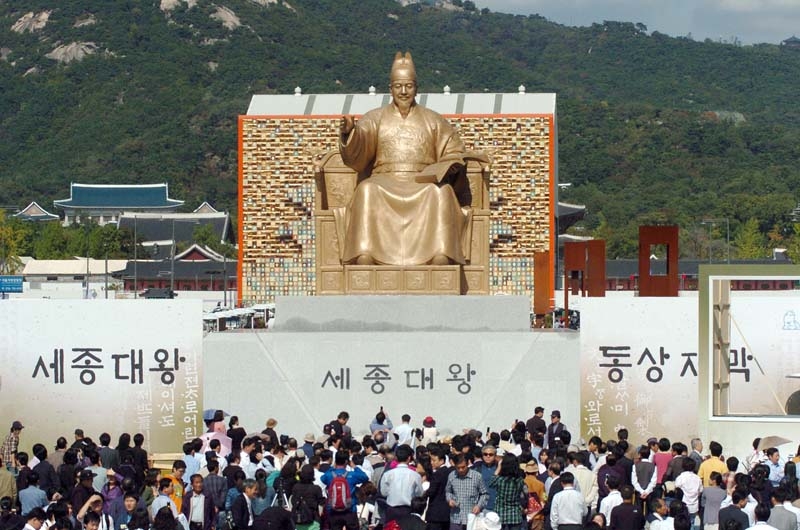 Today, October 9, is Hangul Day, possibly the only holiday devoted to celebrating a writing system in the world!

The holiday commememorates the invention of the Korean alphabet, Hangul, in 1446. Until King Sejong of the Choson Dynasty (1392-1897) mandated that a native writing system should be developed, Korean had no offical written form. Classical Chinese was the lingua franca for the literate classes.

For the last five centuries, Hangul (한글) has been praised as one of the most scientific writing systems in the world. The 24 letters are easy to write and read and logically reflect the sounds they represent. As opposed to Chinese characters, which take years to master, Hangul can be learned in a few hours.

Fans of the alphabet have even tried to export it beyond the Korean Pennisula. The Hunminjeongeum Society, a think tank based in Seoul, has tried selling tribes without native writing systems in Mongolia, China, Thailand, and most recently Indonesia, on Hangul. This summer, Korea Times reported that the Cia-Cia, a tribe of 70,000 on the Indonesian island of Bau-Bau had adopted the script as their official language. While the Indonesian government would not confirm this, the Hunminjeongeum Society did dispactch several teachers to the island to teach Hangul to elementary school students. They'd like to see Hangul gain popularity over the Roman alphabet.

In honor of Hangul Day, let's give the alphabet a try. This website can help you transliterate (not translate!) English into Hangul. If you know Hangul, you can sound this out: