Gift of Friendship… Or Something Else? Obama's Souvenir to Hu Baffles Some | Asia Society Skip to main content

Gift of Friendship… Or Something Else? Obama's Souvenir to Hu Baffles Some 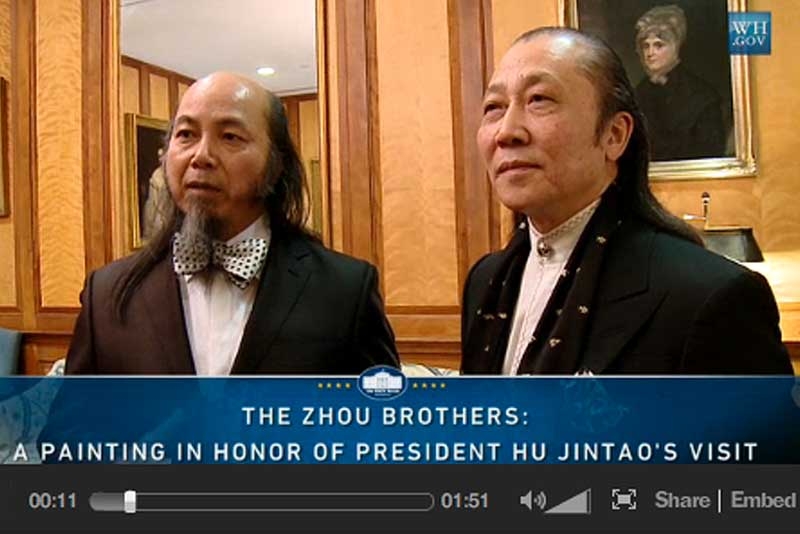 Last week's visit by People's Republic of China President Hu Jintao has inspired debate on pressing issues like the nation's currency policy and stance on human rights. A subject that has stimulated comparatively less dialogue, however, is the official gift presented to China's Head of State by President Obama on January 19.

Unless you're writing for arts magazines, that is.

Artists Zhou Da Huang and Zhou Shan Zuo have been based in Chicago since the 1980s and believe their commissioned piece for President Hu "represents the spirit and great hope for the future between US and China."

The large oil-on-canvas was unveiled in the White House and features a grey/brown background with portraits of former US presidents from Nixon onwards outlined in blue, black, and red, set against a black outline of the Great Wall. The piece measures 86 x 68 in., a scale chosen specifically for the auspiciousness of the numbers six and eight in Chinese culture.

In a statement by the White House's Office of Public Engagement, Associate Director Kalpen Modi (the very same former actor of Harold and Kumar and TV medical drama, House, fame) says the artists exemplify a "symbiosis of Eastern and Western philosophy."

Art in America managing editor and contributor Richard Vine had a different view, describing the duo as "given to Siegfried and Roy attire" who "exhibit paintings, prints, installations, and performances worldwide, mostly in art fairs and second-tier venues."

Vine's description of their work was even more biting, positing that the two "specialize in kitschy live showmanship and an anodyne version of semi-abstraction that has won them such accolades as a Prize for Creativity from the Peace Corps of the United Nations."

Modi describes the work as "replete with imagery evoking the friendship and history" between the two nations, whereas Vine believes it lacks subtlety and questions the work's appeal to the Chinese Head of State.

Discuss: What do you think of the Zhou Brothers' painting? Is this an appropriate gift to present to a fellow Head of State? What would you give instead?