Gandhi Biographer: 'I Aim to Be Provocative, Not Offensive' | Asia Society Skip to main content

Gandhi Biographer: 'I Aim to Be Provocative, Not Offensive' 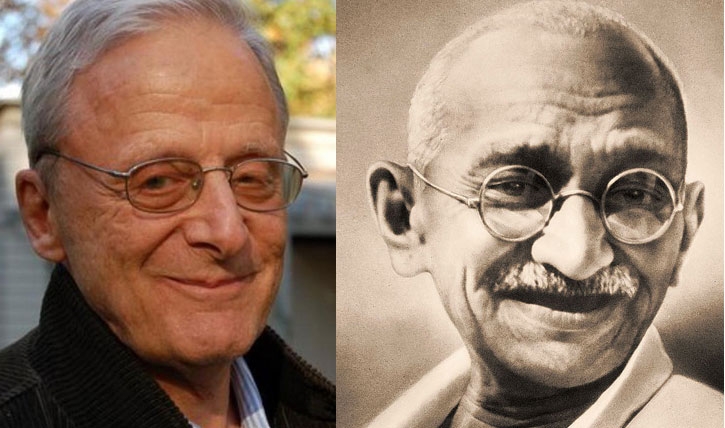 Great Soul: Mahatma Gandhi and His Struggle with India, the new book by Joseph Lelyveld, a Pulitzer Prize winner and the former executive editor of The New York Times, has already been banned in one Indian state and there are rumblings a nationwide ban may be forthcoming — even though the book has yet to be published in India and almost no one there has read it. Much of the controversy surrounds Lelyveld's discussion of Gandhi's sexuality and his close relationship with German-Jewish bodybuilder and architect Hermann Kallenbach. Lelyveld — who is appearing at the Asia Society in New York on Thursday, April 7 — recently responded to the critics. He sent us the following comments via email.

On the controversy over discussion of Gandhi's sexuality. My book's central theme might be even more challenging than the passages that have aroused so much sound and fury. It concerns his struggle for social justice, not his intimate relationships. The controversy of the last week focuses on three paragraphs in a discussion of a dozen or so pages of Gandhi's relationship with Hermann Kallenbach, part of a 349-page book (minus end notes and bibliography) that very few people in India have seen, including those who would ban it. Those three paragraphs raise the sensitive question of sex but reach no conclusion. When the book appears in India in a few weeks, I urge readers to turn the page where they will find my own humble attempt at a conclusion: that it's best to be guided by what the two men actually said about celibacy, abstinence and the control of diet in the pursuit of those aims. My own belief is that they were not hypocrites and that their practice almost certainly conformed to their principles. But that is just the beginning of the story.

I think my discussion of Gandhi's letters to Kallenbach — which have been in the public domain for nearly 20 years — shows very clearly that Gandhi had a deep love for his Jewish friend and wanted him by his side for the rest of his life. He says as much. It's harder now than it probably was a century ago, when Gandhi and Kallenbach lived at Tolstoy Farm outside Johannesburg, to believe that two men can be on loving and intimate terms without it becoming overtly sexual. But it's an effort of imagination we should at least attempt. If it's wrong to discuss sex in connection with Gandhi (who much later would tell his grand-niece Manu that he wanted her to regard him as her mother), I'm guilty. The critics mistake the discussion for an insinuation that I did not intend. What Gandhi aspired to, in the later stages of his life at least, was a kind of sexlessness, something different from bisexuality (a word, incidentally, I never use). I don't discuss that aspiration in any detail because of my own limitations: I don't understand it. Nirmal Kumar Bose's essential "My Days with Gandhi" is still the best starting point for considering the question. There is also Bhikhu Parekh's essay, "Sex, Energy and Politics."

On why Gandhi generates such strong emotions. He's a fascinating, self-created, ever-changing figure — an original in so many ways — of profound moral ambition who has become closely identified with Indian nationhood, even though many of his most urgent teachings have been neglected.

On the unfading allure of Gandhi studies. Some brilliant and devoted people on four continents have been working on Gandhi and his legacy over the last 60 years, delving into his thought and actions from every conceivable angle. Keeping up with the new studies can become a career in itself. I've had the privilege of meeting a number of these scholars in India and elsewhere and have benefited enormously from those encounters. As I say at the outset, I don't mean to offer my book as a substitute for the standard interpretations of his life but an amplification, focusing on him as a visionary who hoped for a wide-ranging social transformation of India and was, ultimately, disappointed in those hopes. That's why my subtitle speaks of Gandhi's struggle with India, rather than as it might have been. Gandhi's struggle for India. Of course he struggled for India, but I wanted to understand why he didn't celebrate when India achieved her freedom in 1947, why he called himself a "spent bullet" and a "back number" and remarked, this is "a sorry affair." I aim to be provocative, not offensive. The story I tell has always been there, just below the surface. From my standpoint, his failures are in some ways more noble and inspiring than his successes.

On what Gandhi would think of today's India. The fact that I've spent four years delving into Gandhi's life and thought doesn't qualify me to declare what Gandhi would say about India in 2011. It's hard enough for me to know what I can say myself about this vast, contradictory, surging, crowded, alluring, often heart-rending country. But I can refer you to what Gandhi did say in 1915, a few months after he finally came home from South Africa. In a letter to his dear friend Kallenbach, he wrote: "I see around me on the surface nothing but hypocrisy, humbug and degradation and yet underneath it I trace a divinity I missed [in South Africa] as elsewhere. This is my India. It may be my blind love or ignorance or a picture of my own imagination. Anyway it gives me peace and happiness. It fills me with hope and confidence without which no man could work."