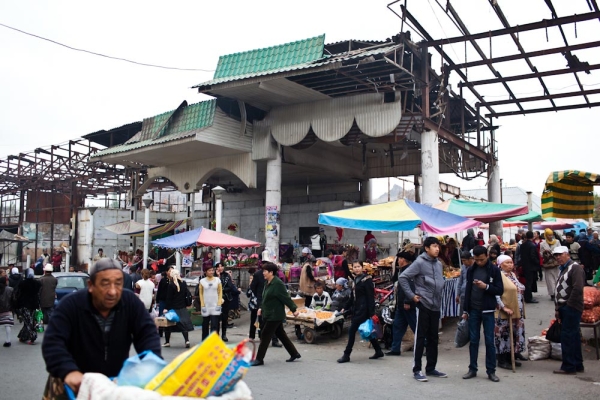 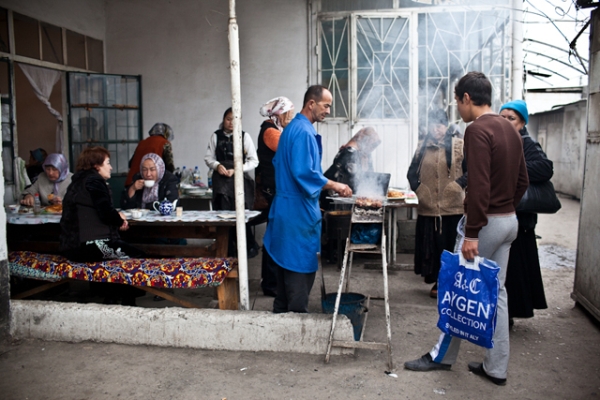 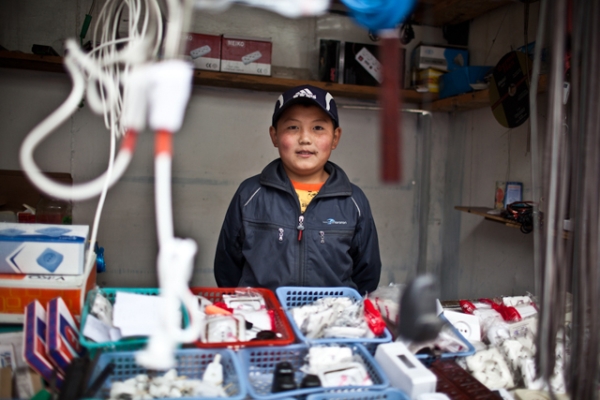 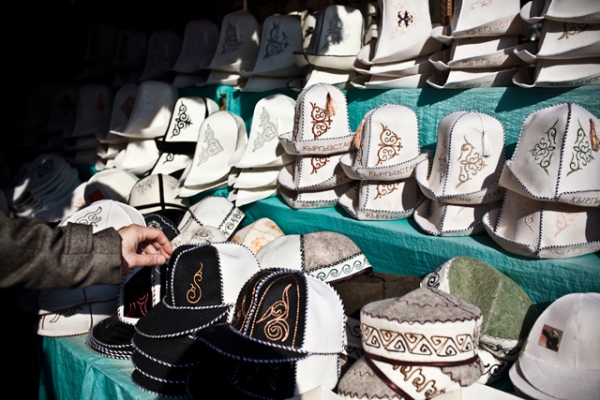 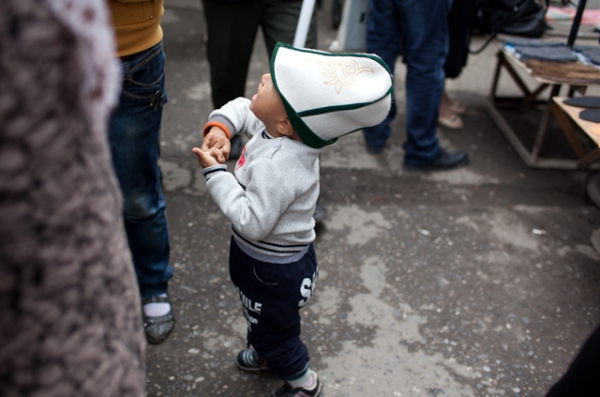 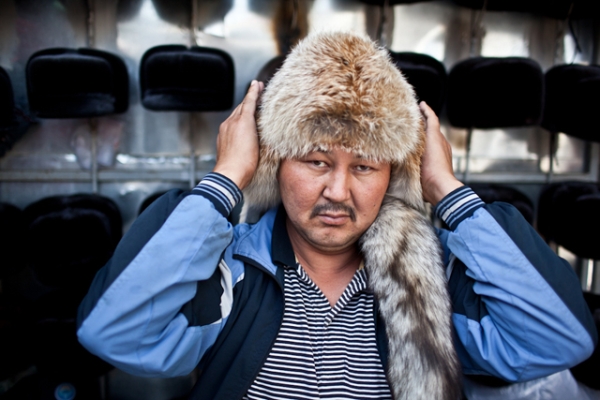 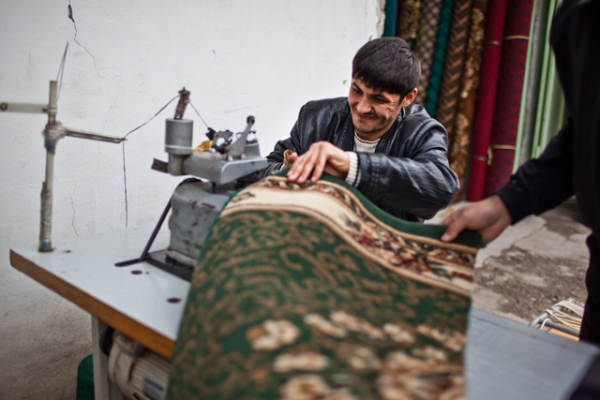 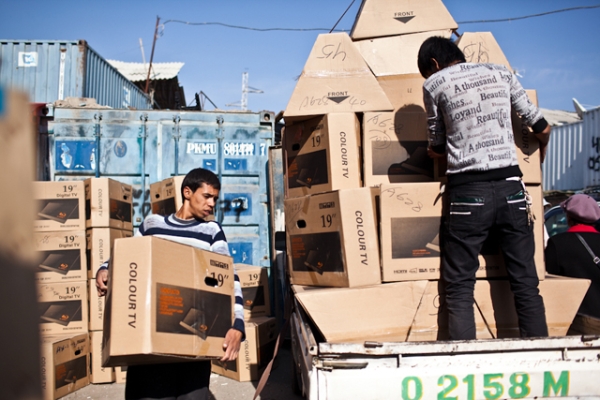 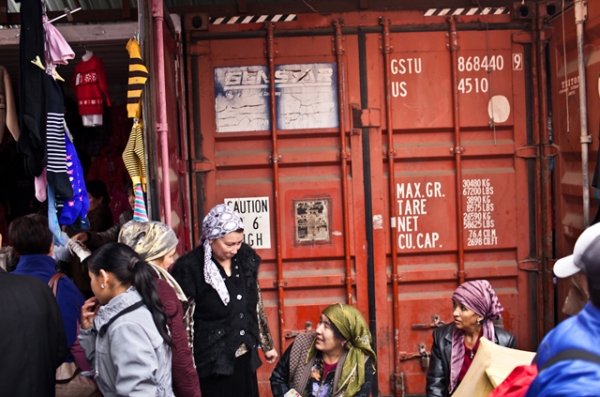 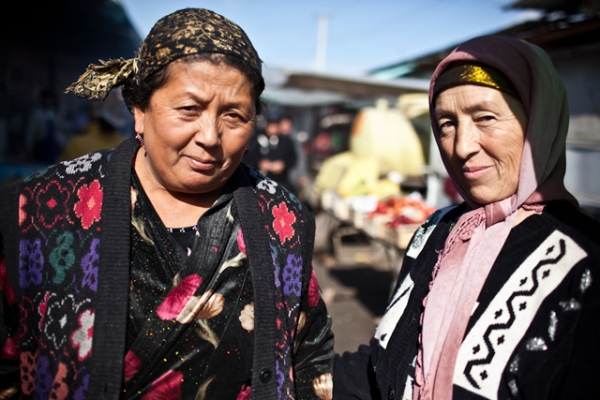 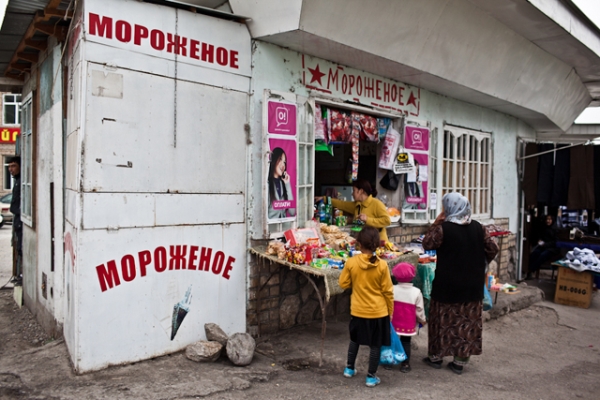 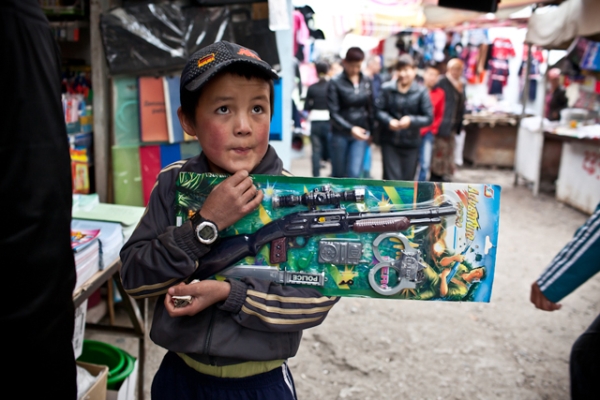 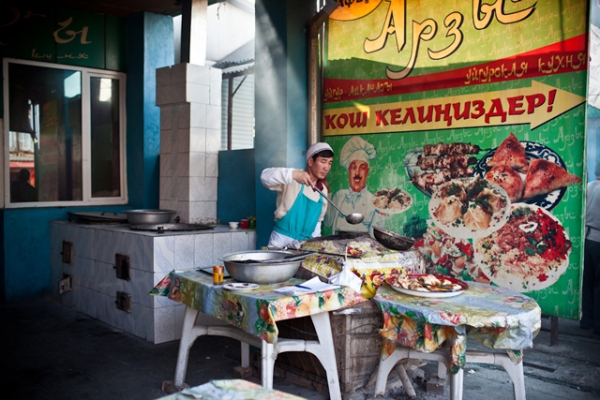 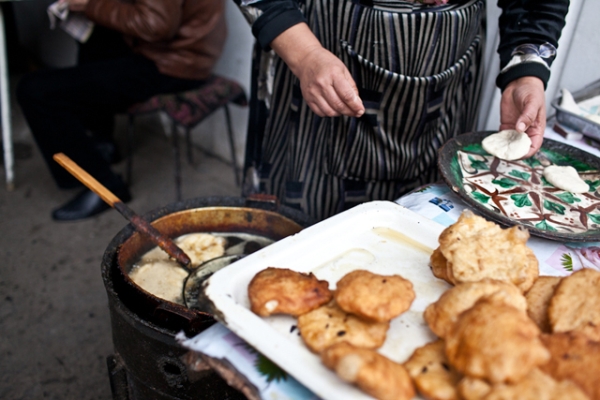 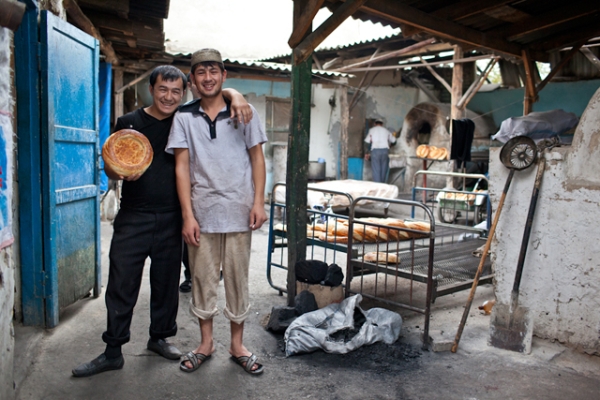 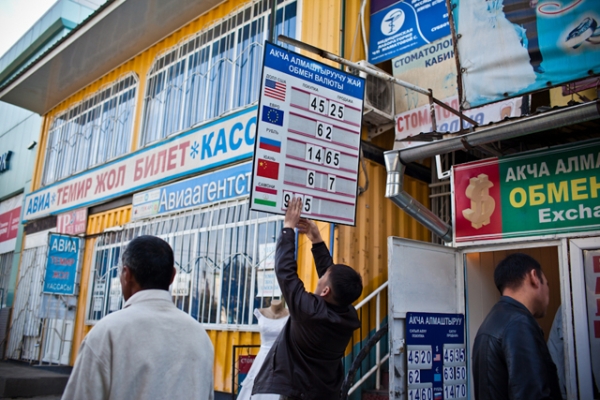 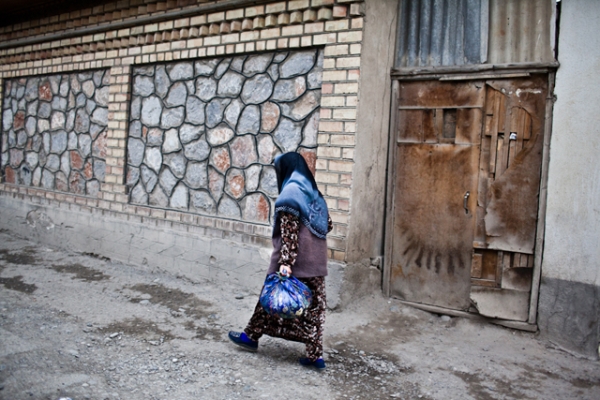 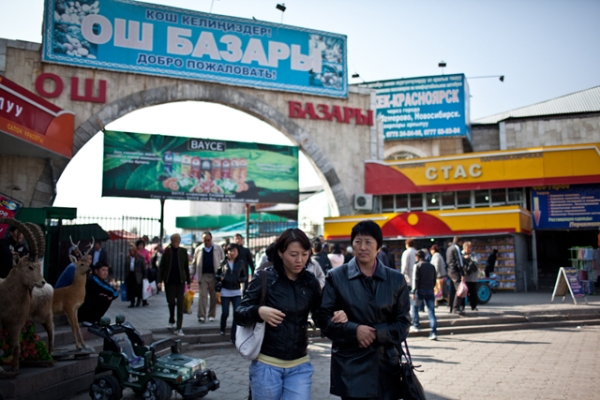 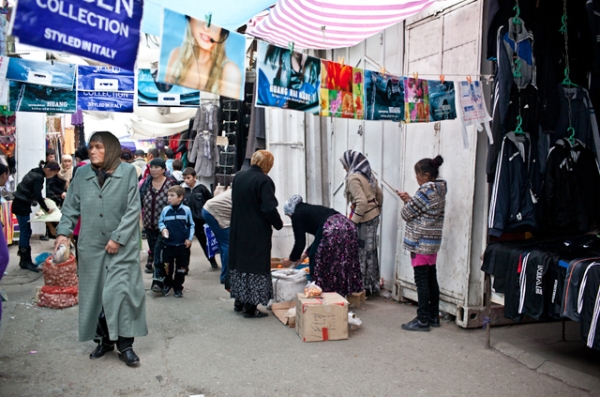 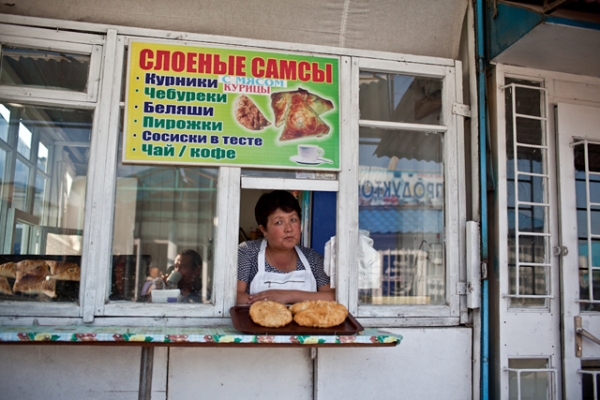 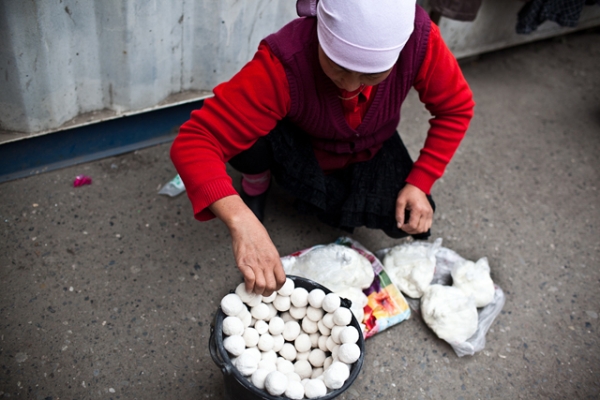 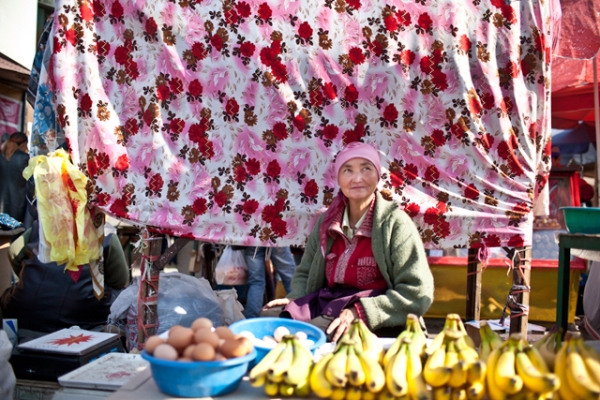 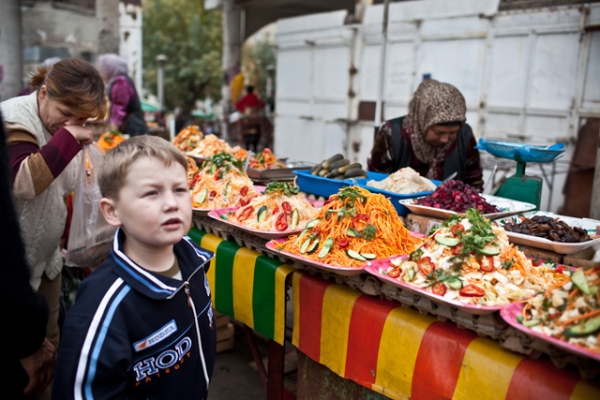 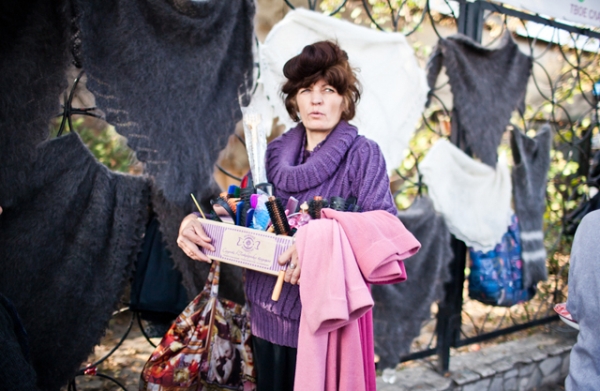 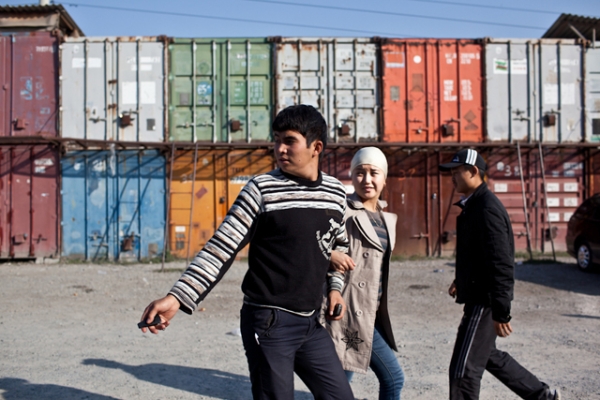 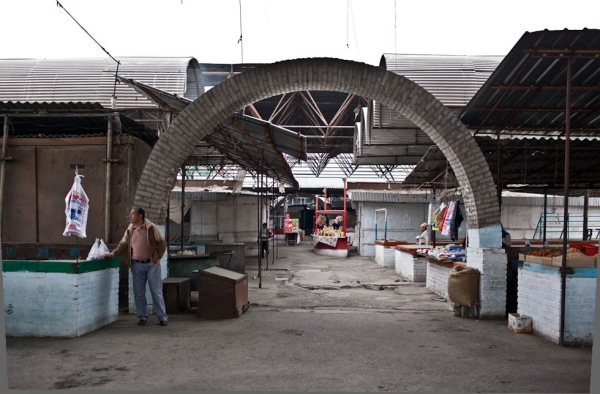 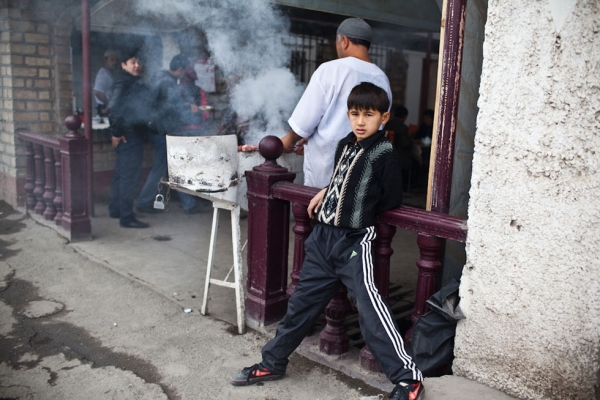 Sue Anne Tay is a Singaporean photographer based in Shanghai. Her widely read blog ShanghaiStreetStories.com focuses on Shanghai's urbanization trends and attempts to preserve its heritage architecture. Tay is also the contributing photographer for ChinaInCentralAsia.com, an ongoing research project charting China's growing influence in the Central Asia region.

Earlier in 2012, Tay made a series of trips to Kyrgyzstan that she documented extensively in photographs — a selection of which appear in the gallery above. Via email, the photographer described for Asia Blog the journeys and impressions behind these images.

What inspired you to photograph Kyrgyzstan?

I was in Central Asia with two academics who are writing a book on China's growing influence in the Central Asian region.

We started in Kyrgyzstan, which is a major entry point for Chinese goods to enter the region. We reverse-trekked a key trade route from Kyrgyzstan's capital, Bishkek, down south to Osh region, and continued to the Irkeshtam Pass bordering China.

Interestingly, the plan to visit Kyrgyzstan has been in the making for almost a decade. I lived briefly in Russia and Azerbaijan in 2001 and traveled all over China's Xinjiang province in 2010. Essentially, I've encircled the Central Asia region but only recently got to live out my dream of photographing Kyrgyzstan.

Why did you choose to focus on the bazaars specifically?

The hustle and bustle of a crowded bazaar or market is such a natural draw in any country, and visually stimulating for a photographer.

Bazaars have traditionally been the hub that draws people together — in this case, Kyrgyzstan's majority Kyrgyz and its many ethnic minorities, along with foreign traders from China, Turkey and India, just to name a few — to do business, eat, gossip and simply connect with a larger community.

Bazaars are also the truest and best reflection of a country's culture, cuisine and social dynamics. On a long amble through the Dordoi Bazaar in Bishkek or the Karasuu Bazaar in Osh, you can see the staples they eat (naan, somsi, shashlik), clothes they wear and their taste in household and consumer goods.

How did the people of Kyrgyzstan react to having their photos taken?

The great thing about shooting in bustling trade bazaars is that people are simply too absorbed in their daily business to notice a camera in their midst.

Some traders are curious when they see a substantial camera and even seek you out to have their photos taken. They can be almost comically theatrical, which often makes for some striking portraits.

Of course, there are also traders who are clearly irritated by a nosy camera, which is understandable as they feel you are infringing on their space. It wouldn't be hugely different in a major city.

What was your perception of Kyrgyzstan before you went there? Now that you’ve spent some time there, has that perception changed?

Before I arrived in Kyrgyzstan, I had different, though not necessarily contradictory, points of reference. One was the tourist campaigns touting the country's beautiful rolling hills and rich semi-nomadic traditions.

The other was the Tulip Revolution in 2005, when the Kyrgyz overthrew their corrupt President, Askar Akayev. Mind you, this is in a region where most authoritarian leaders still have established cult personalities (Turkmenistan) and a firm hand over the populace (Kazakhstan, Uzbekistan). Thus, I thought of Kyrgyzstan as being different, with a politically motivated urban population bent on preserving its newfound rights.

In many ways, my time in Kyrgyzstan reinforced these impressions. Kyrgyzstan's landscapes are truly beautiful and the rural populations are very much defined by their traditions as they are committed to their livestock.

At the same time, you are aware of Kyrgyzstan's freer society and openness to the outside world. In Bishkek, young Kyrgyz are diversifying away from the Russian language and embracing English, Turkish, French, German and even Mandarin in the bid to better their employment prospects in a still-developing economy. Prospect Mira in Bishkek is lined with colleges, polytechnics and universities with students mingling comfortably with thousands of foreign students among them and openly engaging in discussions about politics, culture and national identity.

I participated in a political rally for a prominent Osh politician in southern Kyrgyzstan. His deputy, a dynamic young man who spoke fluent English, mobilized dozens of university students to canvass the streets and they genuinely looked like they were enjoying themselves.

What was your most memorable moment while you were photographing this series? Why?

That would be in the Osh Bazaar in Osh city. We were there in October 2011, about 16 months after the violent ethnic clashes between the Kyrgyz and minority Uzbeks that resulted in 200 dead and thousands injured. Over 100,000 ethnic Uzbeks fled to Uzbekistan and even more were displaced, according to the United Nations. Unofficial figures are higher and there were even reports of rape and torture of Uzbeks.

The Osh Bazaar was crowded on a weekend but one can still see the evidence of the devastation caused by the clashes. An entire section of the bazaar where Uzbek traders used to do business was destroyed and eerily empty. The roof of the food market was burnt through and hollowed out and metal fences were bent out of shape from the violence.

There are still Uzbek families who have chosen to stay on after the riots, but Kyrgyz traders I met said they remain very low-key. At a different bazaar, a Chinese trader told me that the Uzbeks would dispatch runners to do their shopping to minimize contact with the ethnic Kyrgyz.

Ironically, at the entrance of the Osh Bazaar sits a giant sculpture of a globe with the words "World Peace" carved alongside it.

Where will your next story take you?

Following Kyrgyzstan, I was in Kazakhstan and Uzbekistan in early spring this year. There is still much to document — Tajikistan, Turkmenistan and Afghanistan — but the latter two will be tricky and it will depend on funds and time.

Meanwhile, I'm back in Shanghai, where I am based, documenting disappearing old neighborhoods and their communities, which I've been doing for three years. Shanghai is this decade's most exciting megacity story, with a million tales to be recorded and heritage architecture to document (and, hopefully, preserve). It's a battle against time and the wrecking ball.