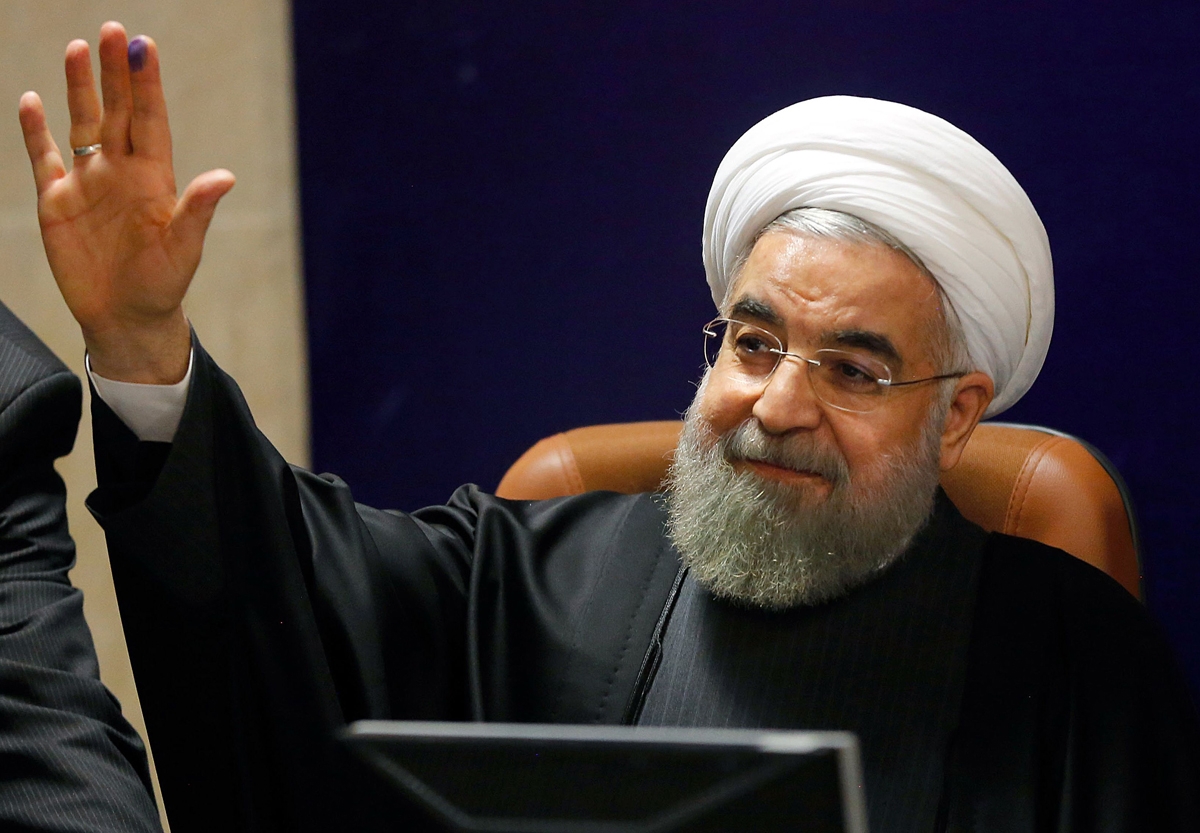 Iranian President Hassan Rouhani addresses a press conference after registering his candidacy for the upcoming Assembly of Experts elections at the interior ministry in Tehran. (Atta Kenare/AFP/Getty Images)

President Donald Trump has made little secret of his dislike of the Joint Comprehensive Plan of Action (JCPOA), the deal signed by Barack Obama in 2015 to curtail Iran's nuclear weapons program in exchange for sanctions relief. Fourteen months into Trump's presidency, Washington remains in the deal — but perhaps not for long. On January 12, Trump announced that he was certifying Iran's compliance of the deal "for the last time" and said the U.S. would pull out in four months unless Britain, France, and Germany — co-signatories along with China, Russia, Iran, and the U.S. — improved the deal.

Trump's opposition to the JCPOA aligns with neo-conservatives in the Republican Party who argue that the U.S. made significant concessions to Iran without receiving guarantees that Tehran, a major American adversary since the 1979 Islamic Revolution, would cooperate more with U.S. interests. But Trita Parsi, president of the National Iranian American Council, says that a U.S. withdrawal from the deal would actually empower hardline forces within Iran — the very constituents most skeptical about cooperating with Americans in the first place.

"From the outset, hardliners have said 'go ahead, strike a deal — but the U.S. is not trustworthy and will end up betraying you,'" he said.

The central logic behind Iran's willingness to sign the deal was that sanctions relief would spur growth in a country long isolated from global markets. But in the two and a half years since the JCPOA signing, economic results have mostly been disappointing. Corruption and economic mismanagement, two factors behind the large protests that rocked Iranian towns and cities in January, shoulder some of the blame, but the atmosphere of uncertainty over what the Trump administration might do has also chilled investment.

American policy toward Iran has experienced little tangible change since Trump replaced Obama as the American president. But Parsi said that the Trump administration has nonetheless dismayed Iranians through his vehement opposition to the nuclear deal, their inclusion in last January's controversial travel ban, and his less than sympathetic response to an attack perpetrated by the Islamic State that killed 12 Iranians in Tehran last June. President Trump has also established warm ties with Saudi Arabia, with whom Iran has waged proxy battles for influence across the Middle East, and is a vocal supporter of anti-Iranian Israeli Prime Minister Benjamin Netanyahu.

According to Parsi, these acts have undone much of the goodwill engendered by Obama's more conciliatory approach to Iran — and vindicated skeptical conservatives in the country.

"Hardliners said that Obama was an exception and things would go back to where they were as soon as he left office," Parsi said. "They didn't believe he was capable of actually changing U.S. policy."

Moderates have gained the upper hand in Iranian politics since the signing of the JCPOA, winning big in parliamentary elections in 2016 and securing Hassan Rouhani's re-election to the presidency last year. But the erosion of the nuclear deal could damage forces within Iran that have called for greater rapprochement with the United States and its allies in Europe, and at a critical time. The health of the country's 78-year-old supreme leader Ayatollah Ali Khamenei is imperfect, and influence over who replaces him would depend in part on the composition of the civilian government.

"Hardliners have recently lost a lot of elections," said Parsi, "and they'll do whatever they can to make it impossible for moderates to have any kind of victory."