The Crisis of Thailand’s Junta Rule 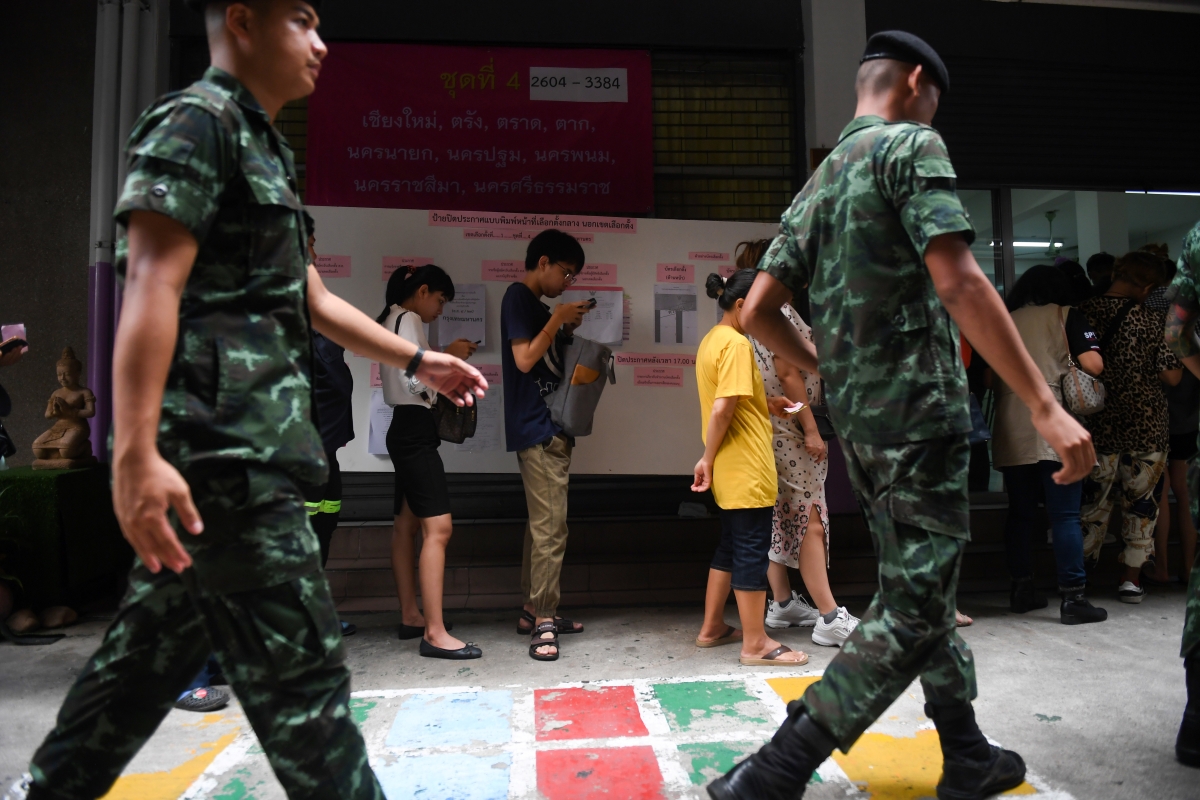 Thai soldiers queue up with others to cast their ballots during early voting in Bangkok on March 17, 2019, ahead of the March 24 general election. (Lillian Suwanrumpha /AFP/Getty Images)

As Thailand heads to the polls on March 24 for the first time in nearly eight years, the stakes are the highest they have been in decades. The election, put off repeatedly since a 2014 military coup, may determine whether Thailand can ever become a democracy that works — or if it is doomed to remain perpetually under political dysfunction or authoritarian rule.

For the predominantly Buddhist kingdom of 70 million at the heart of mainland Southeast Asia and the hub of ASEAN, this election — like many before — is, in fact, a sideshow to the broader backdrop of power struggles between traditional and newer political forces. Yet the vote is a crucial step. In the months that follow, either a compromise will emerge or Thailand will slip back into its world of intractable political conflicts, coups, and constitutions.

To be clear, the deck is already stacked against democracy thanks to the most recent of Thailand’s many constitutions, promulgated in 2017. The entire 250-member Senate is now directly and indirectly selected by the junta and is empowered to vote for the prime minister. Complex changes to how parliamentary seats are apportioned were put into place to undermine the big parties that have traditionally dominated constituency ballots by giving them fewer party-list seats in favor of smaller parties.

The game plan for the junta is to retain power after the election through a handful of pro-military parties. But despite benefiting from the government’s policy platforms, state machinery, and largess, the parties are not polling well.

Rather, it is the popular Pheu Thai party which appears on track to grab the largest share of votes. Started by the ousted former Prime Minister Thaksin Shinawatra, and headed by his sister, Yingluck Shinawatra, who served as prime minister as well until the latest coup, the populist party retains a huge measure of support. But it is nearly impossible that it will receive an overall bicameral majority.

The swing parties are likely to join the post-election government and assume cabinet portfolios. The Democrat Party, under former Prime Minister Abhisit Vejjajiva (Thaksin’s former rival) is the strongest by far among swing parties but faces stiff competition in its two strongholds in the south and Bangkok. The likelihood is that these swing parties will join forces with the military-aligned parties as they derive from the same anti-Thaksin constituent bases.

'When the next crisis emerges, it will be another déjà vu for Thailand but this time the result may be different.'

At issue will be the premiership. If the military-aligned Palang Pracharat Party comes out ahead of the Democrat Party, then Prime Minister Prayuth Chan-ocha — the general behind the 2014 coup — will most likely remain the post-election prime minister (reinforced by the junta-appointed 250 senators). Even if the Democrat Party lands more seats than PPRP, Prayuth will have the Senate advantage and army backing, with potential internal dissension among Democrats to undermine Abhisit and support the incumbent army strongman.

The game plan for the anti-junta, anti-Prayuth bloc is clear. Pheu Thai, the popular, new Future Forward party, and several other parties are virtually certain to act jointly as the opposition to a junta-backed coalition government. Their combined MPs are likely to exceed 200, and could well add up to more than half of the lower house. If so, the junta-led government will be correspondingly weak because the Senate can help in taking the premiership but law-making is confined to the lower house. The opposition bloc can stymie the junta-backed government as it tries to govern.

And so, while the military-backed parties will likely do poorly at the polls overall, the new government is unlikely to represent the will of the people in any meaningful way.

The most probable outcome to the March 24 elections is a junta-backed and Senate-supported coalition government, most likely under Prayuth, with most parties included (except the Thaksin-aligned banners, FFP, and Seri Ruam Thai). But because that coalition is unlikely to command a sufficient number of MPs for a stable and effective rule, the post-election government will doubtless be weak. The 2017 constitution is so distorted and uneven that it will become the source of myriad problems. A parliamentary deadlock may well ensue in the lower house, with all roads leading to a constitutional crisis and to Thailand’s overdue reckoning.

When the next crisis emerges, it will be another déjà vu for Thailand but this time the result may be different. While years of Thai politics was dominated by battles between pro-Thaksin red-shirts and their opposing, royalist yellow-shirts, the new monarch has so far shown a preference not to be used by either side. In the longer term, the 66-year-old new king may be interested in having Thailand move forward through compromise and accommodation past the conflict and polarization of the past. This could be a potential legacy for his reign.

If so, Thailand’s playing field may become more level. When one side does not have the perceived and real inherent advantage of palace backing, it might realize it cannot win every time and will thereby be willing to negotiate. But such a compromise that yields a new slate for Thailand requires flexibility from the other side as well. Thai politics over the next 18 months is likely to be different, either worse or better but not the same, because the yellow side no longer has an outright upper hand. It would be Thailand’s ultimate irony if its late king’s glorious long kingship, which was tarnished in its twilight by protests and coups, is followed by a new under-regarded reign that can broker and bring about compromise and a way forward.