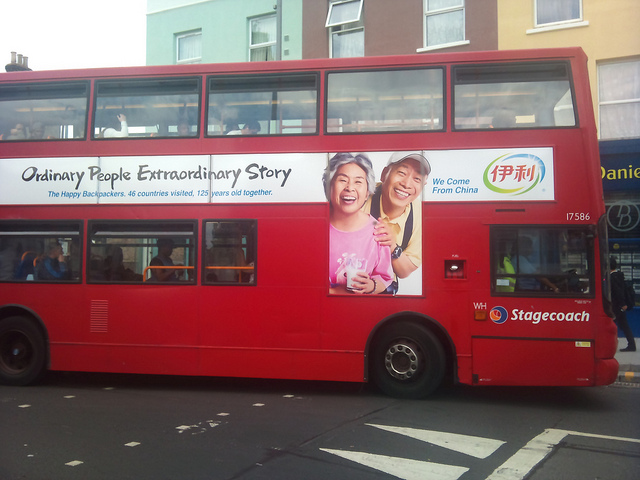 Yili, a Chinese milk company based in Inner Mongolia, recently launched an ad campaign on London's iconic double-decker buses that had locals scratching their heads. The ad shows Chinese men and women, none of whom are recognizable celebrities or athletes, alongside the brand's logo, in Chinese. No Yili products are for sale in London, and few clues on the buses hint as to the significance of these people.

With the help of Chinese translators, however, a handful of London bloggers were able to decipher the ad. Yili's campaign is a coordinated effort with Youku, the Chinese YouTube, intended to promote the "Olympic spirit" of average Chinese citizens who lead active, healthy lifestyles. The company reviewed video submissions on Youku, and then highlighted the best entries in an ad campaign that ran in China at the same time its counterpart appeared on London buses. Below are some examples of the campaign in its Chinese version:

Joanna Scarratt, head of Brand Partnership Department at United Agents talent agency in London and an occasional blogger on PR, wrote: "I can't imagine I will be able to buy Yili's products in my local supermarket, but I've been engaged by the power of an advertising campaign aimed at people who live over 5,000 miles away!"

But not everyone saw the marketing campaign as a success. Jennifer Whitehead (@jenniferesque on Twitter) tweeted, "Oh, the sponsor is Yili, a Chinese dairy. Wonder if you can buy their products here. Such a strange ad campaign."

On the other hand, Yili has no presence in the English milk products market, yet still made an impression on the locals — and for all the confusing Chinese characters, a number of Londoners still found their way to the bottom of this mysterious ad campaign. Are the bus ads the extent of the campaign in London, or just a hint of what's to come once the Olympic Games begin? Feel free to speculate in the comments field below as we await the opening ceremony.