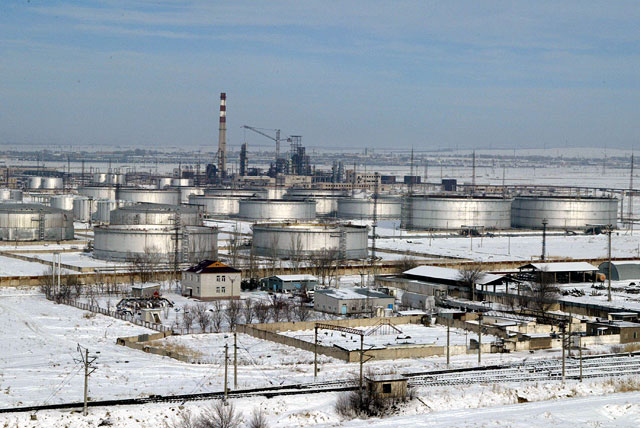 Nowhere is the growing importance of the dynamic economies in Asia, as well as China's increasing role on the world stage, better recognized than in the Central Asian states of Kazakhstan, Uzbekistan, Turkmenistan, Tajikistan, and the Kyrgyz Republic. And no issue is of greater importance when considering this reality than the region's energy security policy.

Since the dissolution of the Soviet Union, successive U.S. administrations have looked to the countries bordering the Caspian Sea and their rich energy deposits as an opportunity for commercial investment. Development in these countries provides alternative sources of energy for European demand, reducing dependence on the Persian Gulf for oil and gas delivered from Moscow. Today, however, Central Asian republics' energy policies look more toward China and the East than Europe or Russia.

Moscow's Tenuous Hold
Despite the existence of large reserves of hydrocarbons in the Caspian region, primarily in Azerbaijan on the Caspian's western shore and Turkmenistan and Kazakhstan to the east, the central planners in Moscow preferred to develop the oil fields in Siberia, leaving this valuable resource untapped. This changed following the breakup of the Soviet Union, when U.S. and European multinational oil companies signed agreements to develop and transport oil from the Caspian region to markets in Europe. The greatest of these developments was oil from Azerbaijan being piped from its capital Baku via the Republic of Georgia to the Turkish port of Ceyhan. Large quantities of oil from fields in Kazakhstan have also transited Russia via pipelines or by rail to European markets. It seemed that energy from the Central Asian republics of Kazakhstan, Turkmenistan, and to a lesser degree Uzbekistan, would connect these countries to Europe and the economic and security institutions that had grown to include former Warsaw Pact countries and the Baltics.

For Russia, this was unacceptable. Russian President Vladimir Putin's tendency to use energy as a political weapon, combined with his world view placing former Soviet Republic states in Moscow's privileged sphere of influence, drove Russia's desire to control Caspian energy — mainly natural gas — for its benefit. Moscow wanted to control all the transit links, enabling it to increase its leverage in Europe, and tout its role in keeping the showers hot and the factories operating in Berlin, Brussels, and elsewhere.

Moving away from its Soviet hold, Azerbaijan has had great success in using its energy both for economic development and enhancing its sovereignty and international gravitas. Early success with the "deal of the century" and the Baku-Tbilisi-Ceyhan (BTC) pipeline permanently connected Azerbaijan to the West. Azerbaijan's President Aliyev has continued this independence from Moscow, making it clear that just as was the case for its oil, Azerbaijan's gas is intended for European markets.

What Azerbaijan achieved by completing the BTC pipeline for transporting oil, it looked to repeat for the greater reserves of gas from across the Caspian. As Moscow, which had once hoped to be a reliable source of energy for Europe, became more aggressive with the nations of the former Soviet Union, it became increasingly important for these nations to provide an alternative for Europe to gas produced by or transiting through Russia. Several attempts have been made to connect gas from Kazakhstan or Turkmenistan to Azeri gas on the other side of the Caspian through a Trans-Caspian gas pipeline.

China Rising
For Beijing, efforts to prepare for continuing economic growth and the resulting increased energy needs, combined with a lack of confidence in the international energy market, have propelled the Chinese to begin securing energy in Africa and as far away as the Americas. It is no surprise that Beijing is keenly interested in the resources available closer to home.

China's appetite for expanded energy sources in its neighborhood coincides with the United States' diminishing role as a player in Central Asia. As a result of a greater reluctance to exercise international leadership and a decreasing presence in Afghanistan, the United States is less able to influence events in the region. China, in sharp contrast, has an abiding interest in what it has taken to calling "our region."

Shifting East
Kazakhstan has long pursued a "multi-vectored" foreign policy. It strives to balance the interests of Russia, China, the U.S., and Europe to ensure it maintains space to make decisions in an environment where at times, it claims to be a flea surrounded by elephants.

In Turkmenistan, the debate has centered on whether this energy rich country will benefit from exporting its gas across the Caspian, joining Turkmen gas with gas from Azerbaijan or further south, through the TAPI (Turkmenistan-Afghanistan-Pakistan-India) pipeline for delivery to markets in India and Pakistan. Moscow utilized its considerable influence over Ashgabat to prevent a Trans-Caspian pipeline, fearing it would cause Russia to lose control of both Turkmenistan's supply and Moscow's growing share of the European market and the leverage associated with this. Yet the TAPI pipeline, betrayed by the security situation in Afghanistan and Pakistan and the terrain it would have to transit, has scared away investment. While neither of these pipelines has become a reality, a gas pipeline to China has been constructed.

Turkmenistan has not been able to realize the benefits of its considerable gas reserves. Even current exports fail to bring in much needed cash; they are instead used to repay loans or receive food for barter. Moreover, the explosion of shale gas in the United States has resulted in a glut of natural gas in much of the world; when combined with a lack of marketable options for Turkmen gas, Ashgabat's only option for profiting from its energy reserves may be an expanded pipeline to China. Otherwise, Turkmen gas will be trapped as companies develop other projects in countries with better investment climates.

With the United States playing a less meaningful role in the energy sector in Central Asia in the future, we may be looking at the Caspian Sea as the dividing line between hydrocarbons going West and East. In the future, the competition for who benefits from the energy reserves in Kazakhstan and Turkmenistan will be between Russia and China, with time being on the side of Beijing.

David A. Merkel will join Asia Society's Texas Center on June 4 for a public discussion on Central Asian governance, energy security, and U.S. policy toward the region. Tickets for this event are available here.

David A. Merkel served as U.S. Deputy Assistant Secretary of State for European and Eurasian Affairs. He is currently Managing Director of Summit International Advisors and a member of Asia Society's Advisory Group on Central Asia.