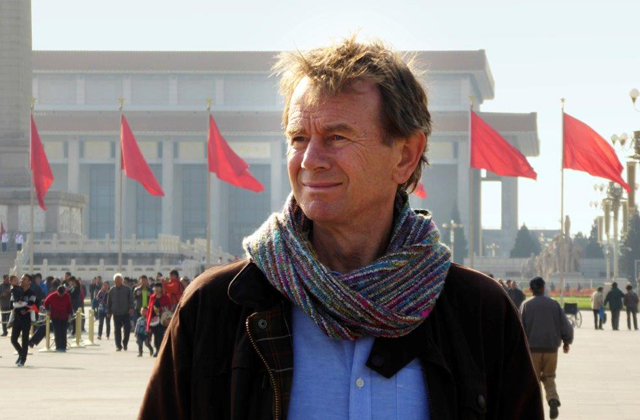 Rendering the five-millennia-year-old history of China, a country of over one billion people, into a single six-episode documentary is just the sort of project that British filmmaker Michael Wood was positioned to tackle. The historian and writer has made over 100 documentary films, including the heralded PBS classics In the Footsteps of Alexander the Great and The Story of India. So when the opportunity arose to present the full sweep of Chinese history, Wood took it. The resulting product, Wood's The Story of China, will premiere on PBS on June 20.

Asia Blog recently caught up with Wood to discuss the origins of his documentary, his love of Chinese people, and why those expecting Western-style democracy to take hold in the country are likely to be disappointed. The interview has been condensed and edited for clarity.

Asia Society will host a special screening of The Story of China followed by a conversation between Michael Wood and Orville Schell on Tuesday, June 13, at 6:30 pm. Learn more

What led you to tackle this project?

We’d done many co-productions with PBS over the years that focused on culture and history — including one on Alexander the Great. In particular, we did a big series for PBS and BBC called The Story of India that offered a panoramic, sweeping story of the country. It went down well with PBS and got a terrific response from the audience. After that everyone said, “Wow, could you do one for China?” There hadn’t been a series presenting a grand historical look at China that was accessible to a general, rather than academic, audience, so everyone was quite keen about it.

My own involvement with China goes back a long way. I fell in love with Chinese literature when I was doing doctoral research at Oxford. I shared a house with a Sinologist, who was a fantastic person. He was forever handing texts to me and saying “you have to read this!"

I first traveled to China in the early ‘80s. When western China opened up in 1984, I went to Aksu and Kashgar in Xinjiang, and then went all over the country on a trip I took later in the decade. Ever since I’ve kept up my interest in China through reading, particularly from some of the old-school writers like Jonathan Spence and K.C. Chang

Chinese history and culture is an unbelievable, inexhaustible source of riches. So when the opportunity to do a series on China arose, we thought “this would be really great.” I wrote a 30 to 40-page treatment for PBS in 2009 detailing how this series could work. They didn’t want a straightforward, dry narrative of dynasties, and quite rightly — people wouldn’t watch six episodes of that.

What was the most surprising or intriguing thing you learned in the process of making the film?

When I first started going to China in the early ‘80s, I’d go to these miserable, industrial cities like Lanzhou and see people wearing Mao suits, which were these green, blue, or gray outfits with flat hats. But I found the people fantastically affable — many people feel cool to the Chinese, as if they’re difficult to know, though I’ve never found that — and hospitable and friendly. I’ve always really enjoyed being in China.

But people then were still traumatized by the Mao Zedong era, as he had just died in 1976. We were just then in the ‘80s beginning to watch the dramatic changes that were happening. So to come back for more than a dozen visits in 2013 was jaw dropping, even though I’d seen the changes on television. I remember taking a train from Shanghai to Wuxi, where I had a contact, and being shocked that there wasn’t any open countryside all the way to Lake Tai.

The most amazing thing to see was how Chinese culture has returned. Part of the devastation of the Cultural Revolution was the attempt to torture Chinese people psychologically by removing them from their past. The Chinese love their past, their culture, and their history. We met descendants of old Song Dynasty families in Guizhou and they’d show us woodblock-printed family histories and paintings of ancestors. We’d ask them, “How did these survive?” And they told us that “when the Red Guards came, we just buried everything.” And they’d take you up to their altar rooms and show you shrines to 36 different ancestors. It was simply amazing. Everywhere we went there was a real sense of the culture coming back.

There are misconceptions about the people Chinese are. Joseph Levenson, the great American Sinologist, wrote during the Cultural Revolution that the Chinese had lost the warmth of home — that’s what Mao had done to them. So I said to our team on day one was that I wanted to capture this warmth. I wanted to capture ordinary people.

What were some of the unifying themes you discovered when capturing the sweep of Chinese history?

There’s a tendency to view Chinese history as monolithic, stable, and unchanging. Actually, China has had these phenomenal ups and downs, periods of destruction and then rebuilding. You get the impression looking at the Forbidden City that Chinese history consists of a long series of emperors swaddled in robes, but the dynamic forces working within this society are very powerful.

You also see that having a strong, centralized, autocratic government lies deep in the Chinese tradition. It’s just that people think that the autocrats should be fair and virtuous. It’d be foolish for audiences to think that the solution for China’s problems would be a Western-style democracy. Of course, freedom of speech and having more local representation are aspects of the government that people would like to change. But the idea of a strong government is something that people want to keep. In fact, in many respects, the Communist Party has eerily replicated traditions that date back to the Ming and Qing Dynasties.

The other thing people should grasp is what an amazing history China has. You look at Europe, an entity of roughly the same size — it’s full of countries that have spent history struggling with each other and being unable to figure out what to do with one another. But China was united in 221 B.C. And that idea of the political unity of China has returned and been re-achieved on many occasions. That sense of belonging to one culture — a Han culture, with Han speech, and a Han script — is very strong. When people try to understand China, it’s really important to understand that Chinese people belong to a civilization that goes back thousands of years, one first united in the third century B.C. There’s a strong sense of China as a unitary civilization — a single entity.