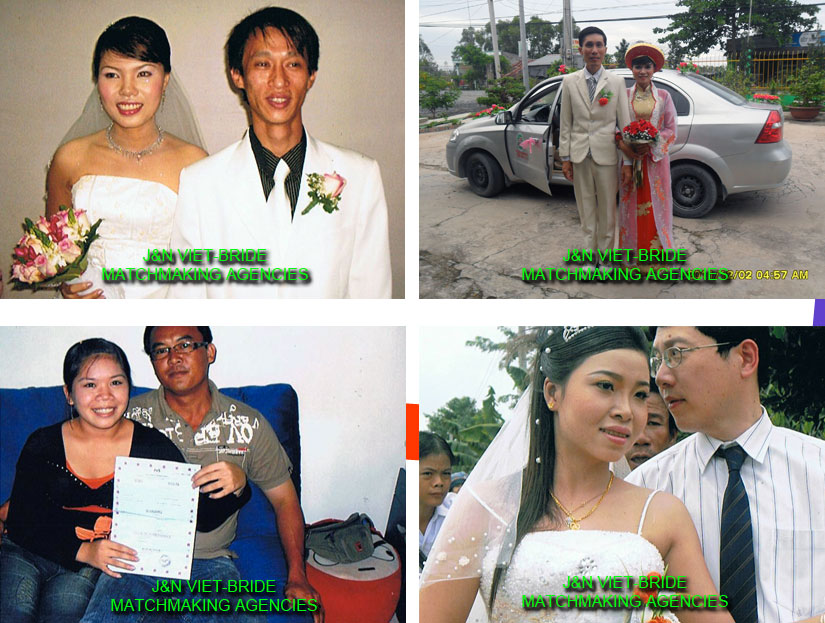 A screenshot from J&N Viet-Bride's website showcases couples who met through the Singapore-based matchmaking service. (jnvietbride.com.sg)

In today's edition of the Global Times, the Chinese English-language newspaper tells us "Vietnam's mail-order bride business is booming." This, of course, is nothing new. But the story, and the controversy surrounding international marriage migration in Vietnam, reminded me of my time in the country. 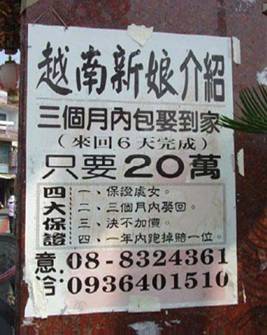 Back in 2007, when I was working to support the health and welfare of migrant brides from Vietnam, an acquaintance sent a photograph he had taken while visiting Ho Chi Minh City’s District 5. It was of a poster advertising a marriage broker’s services, and its bulleted text read: “She is a virgin, she will be yours in only three months, fixed price, if she escapes in the first year, guaranteed to be replaced.”

Although cross-border migration between countries of the region has existed for centuries, the mid-1990s saw a rapid uptick in the number of Vietnamese women marrying foreign men from countries around East and Southeast Asia. Living by the hundreds in viewing hotels around Ho Chi Minh City, women wait day after day for a prospective foreign husband to come and choose them.

How migrant brides eventually arrive in South Korea, Taiwan, Singapore, Malaysia, and even China is controlled by a network of agents whose motives are more driven by profits than the welfare of the people they profess to help.

The proliferation of marriage brokering is largely market driven, and at the intersection of supply and demand, is the market price for these women: about US$5,000. One Singaporean agency, J&N Viet-Bride, advertises that men can travel to Vietnam, select a bride, get married, and return home, all in the space of a week. Their new wives join them a month later, once the visa formalities are completed.

As I found when working on this issue with regional governments as an official with the International Organization for Migration (IOM), Vietnamese women are often living in isolation and are therefore highly vulnerable to exploitation and abuse. But because policies are insufficient for mitigating the cross-border disparities that lead to this type of migration, governments should invest in empowering marriage migrants through education, while concentrating on effectively implementing existing laws.

The marriage migration phenomenon gained momentum after the opening of Vietnam’s economy to foreign investment. In the 1990s, there was an influx of Taiwanese businessmen traveling to work in the country. They found Vietnamese women, with Confucian values similar to their own, to make suitable partners. Upon returning to Taiwan, friends and family members caught on, and opportunists realized they could turn a profit on arranging marriages.

Today, mainland China, Cambodia, the Philippines and Mongolia are also major source countries. According to IOM, 133,000 Vietnamese women married foreigners between 2005 and 2010.

Many Vietnamese women, often from poor rural villages, favor the opportunity to live abroad, stating that they risk domestic abuse within their own villages if they are to stay behind. The lure of relative wealth overseas, and financial pressure to support their families, means migration can be a better option for many, even though they’ve heard some of the stories of marriages gone wrong.

Sometimes the marriages do go very wrong: Vietnamese women have been tricked into sham-marriages that were just a front for organized prostitution and others have been murdered by their husbands.

In spite of the known dangers and challenges, most Vietnamese women remain hopeful that language barriers may be overcome and their own marriages might be rosy. At the very least, the chance for the brides to remit some money to their families is enough incentive to tie the knot.

The exploitation of marriage migrants sits in a policy gray area. Additional support that sometimes comes by way of strict anti-trafficking laws and large, Western-funded anti-trafficking projects, is not largely available to this group, and there are unclear guidelines for destination countries on how to handle cases involving abused migrants.

As non-citizens often unable to communicate with local law enforcement agencies, marriage migrants run the risk of being subjected to years of mistreatment behind closed doors.

Prevention is not an effective option, for one, because most of the women enter into the marriages voluntarily. Financial transactions associated with marriage are also common practice in the region, and so and it’s challenging for authorities to pinpoint whether a client’s fee is going toward the marriage or simply a tour of the country.

There are also few economic alternatives for the women involved, and local Vietnamese officials also lack the resources to adequately identify marriages likely to end in abuse. Demographic shifts, particularly growing populations in developing countries like Vietnam, and shrinking populations in developed countries like Singapore, exacerbate push and pull factors in sending and receiving countries.

Anything to be done?

When I worked on this issue , governments acknowledged that an outright ban on commercially arranged marriage migration was not a viable solution: enforcement wouldn’t be possible.

For example, Vietnamese police would periodically raid viewing hotels, thus pushing agents to neighboring, and less well regulated, Cambodia. Hoping to curb the rapid development of a marriage migration industry itself, Cambodia banned all such marriages for a few months in 2008. Commercial matchmakers subsequently re-focused their attentions on Vietnam.

Yet it’s not all about abuse. Many of the marriages work out to the couple’s mutual liking. And there are many Vietnamese women who capitalize on opportunities at the destination to undergo language training and become integrated into the destination societies.

But integration is seldom easy, particularly owing to regional classism between countries, the same problem that marginalizes thousands of labor migrants as well. More educational programs are needed in order to empower migrant brides to know their rights at the destination. Husbands, their families, and destination societies as a whole also have a significant role to play as well and should also be required to undergo orientation programs about cross-cultural relations, even from primary school onwards.

But the reasons for better understanding are not simply humanitarian in nature: In countries like Singapore, where close to 35 percent of workers are foreign, migrant brides will increasingly be a political force to reckon with, as will their children. Increased emphasis on inclusion would go a long way toward maintaining the stability of destination countries.

Before I left Vietnam in 2008, several departing migrant brides told me all they could do to protect themselves was to go to temple and pray. I hope they found happiness in their marriages and with their new lives abroad.