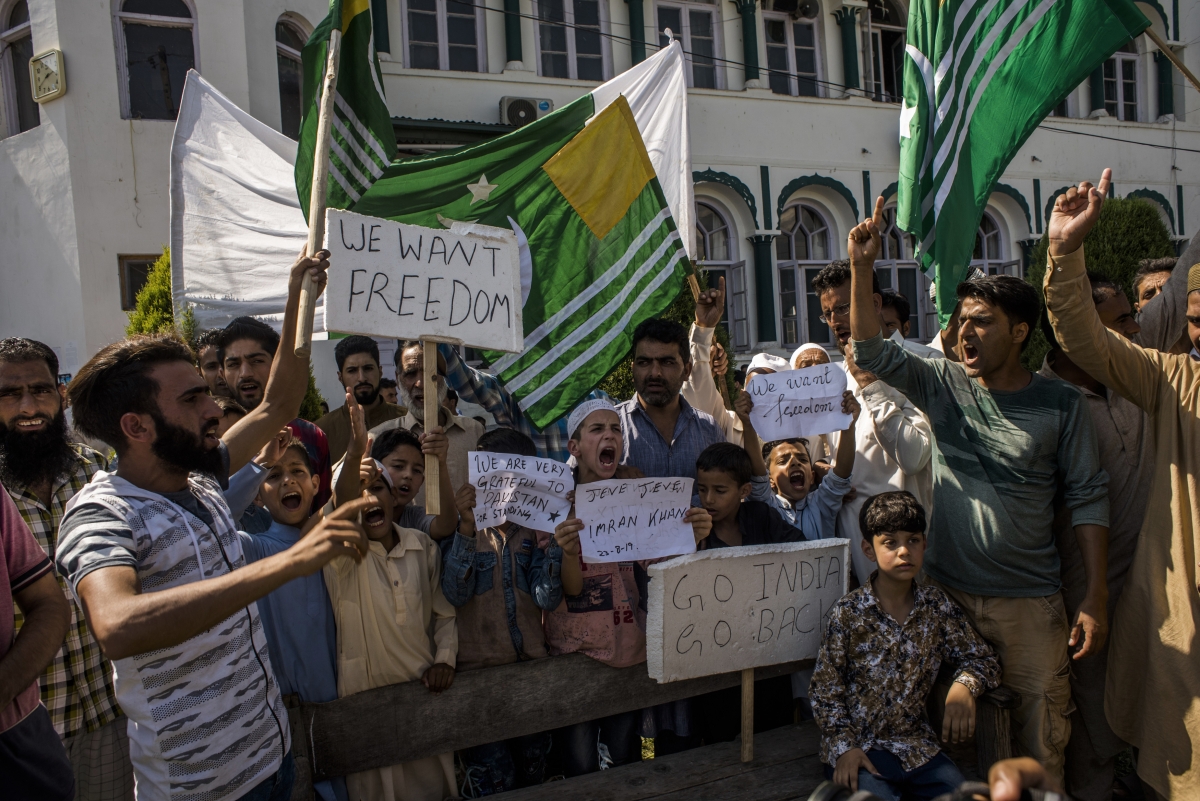 On August 5, Indian Prime Minister Narendra Modi opened a new chapter in the fraught history of Kashmir. By voiding Article 370 of the Constitution, India has erased the special status and political autonomy of the northern state of Jammu and Kashmir. It has split the state in two and, crucially, removed its right to define who could legally be a permanent resident. Taken together, these unilateral actions, which will go into effect on October 31, will fundamentally change the situation on the ground and upend a political status quo that has persisted for decades.

Having worked for years to keep Kashmir off the list of crisis areas that international journalists, human rights advocates, and diplomats regularly fret about, India’s actions immediately catapulted Kashmir back into the global spotlight. Apart from the controversial, unilateral actions, India has drawn further scrutiny for how it has carried them out. Three weeks on, much of Kashmir remains in an information blackout with Internet and phone service shut off. A curfew has been installed and the already heavy Indian security presence expanded. Scores of civilians and political leaders have been detained without charge.

The reception from international media and human rights organizations has been decidedly negative. Pakistan has raised the situation with the United Nations and, ominously, Prime Minister Imran Khan suggested that, if dialogue doesn’t work, Pakistan would pursue other means, setting off alarm bells about a potential military confrontation between nuclear powers. For the first time in years, all eyes are on Kashmir.

But what do India’s actions mean for Jammu and Kashmir and its people? And what does Modi hope to accomplish?

For 72 years, Kashmir has been in political limbo — would it be free, a part of India, or a part of Pakistan? That limbo has resulted in near-constant tension and three wars between India and Pakistan, as well as a violent insurgency in the Indian state of Jammu and Kashmir since 1989.

With its changes on August 5, the Indian government is hoping to move past the old debate over the state’s political status. Modi is asserting that Jammu and Kashmir is no longer an open question subject to UN deliberation, bilateral talks between India and Pakistan, or the desires of the Kashmiri people. He has declared that Jammu and Kashmir is and will always be an integral part of India.

The Indian government has justified its actions by saying it is an internal matter. The situation in Jammu and Kashmir was unacceptable, India argues, stating its actions as necessary to bring stability and prosperity to the region and fully incorporate it as a part of India.

“One Nation, One Constitution,” Modi declared to an exultant crowd during his Independence Day Speech at the Red Fort on August 15. He explained that his actions buttressed India’s territorial integrity and ensured that all Indians would be equal, alluding to the fact that Kashmiris had enjoyed special rights — particularly the right to determine who could settle there and buy property.

Now all Indians have the ability to do so. The government has framed this as a reasonable and inevitable outcome. After all, if Jammu and Kashmir is a part of India, why does it need its own constitution and a separate set of rights?

This is a movie we’ve seen run on loop in Kashmir: state repression leads to political alienation, which leads to violence, which invites greater repression. And the cycle continues.

The problem, of course, is that India had given greater autonomy to the people of Jammu and Kashmir in the Constitution. And while Kashmiris enjoyed certain privileges other Indian citizens did not, some of their more fundamental rights as citizens have been violated by the Indian government and security forces over the decades. The draconian Armed Forces Special Powers Act, in force in Jammu and Kashmir since 1990, is a prime example. The Act, which affords Indian security forces broad powers in the execution of their duties in Jammu and Kashmir, has been criticized by locals as well as by government commissions, human rights organizations, policy experts, and journalists as creating an environment of impunity for Indian security forces.

The new arrangement has downgraded Jammu and Kashmir from a state with special autonomy to a union territory governed directly by New Delhi. The central government has argued that its ability to exercise greater control over the region will cut down on corruption, improve governance, and speed up development.

The government also cordoned off Ladakh, turning what was previously a Buddhist-majority area of the state into its own union territory. The August 5 announcement was a relief to many in Ladakh who felt that their interests could now finally progress with the Hindu majority Jammu and Muslim majority Kashmir no longer holding them back.

It may also be true that the Modi government hopes to lower the temperature in Jammu and Kashmir by gradually changing its demographics. By doing away with Article 35A, the government has opened the door for non-Kashmiris to buy land and property, which it hopes will facilitate an influx of non-Kashmiri Indians to the region that have no interest in the local freedom struggle. The move may also help to nudge the religious makeup of the area to be less Muslim, which may dilute anti-India sentiment overall.

Some Kashmiris see this as a ploy by the Modi government to de-Islamize Jammu and Kashmir, India’s only Muslim-majority state, as part of a larger Hindu-nationalist project to make India synonymous with Hinduism. India’s actions have only stoked such sentiments. And politics certainly played a part in Modi’s decision. The decision to remove article 370 has been long-awaited by some of his most ardent Hindu-nationalist supporters; Modi also knew it would be broadly popular in the rest of India. Coming off a major electoral win in the 2019 parliamentary elections, this was Modi flexing his political muscles and consolidating his support. The opposition’s lack of unity in fighting the measures indicates just how popular they are among the Indian public outside of Jammu and Kashmir.

In his Independence Day speech, Modi stated that his goal was the “peace and prosperity of Jammu and Kashmir.” That is a goal the world supports, but it may be easier said than done. Previous central governments have tried and failed to solve the problem by consolidating political control and hastening economic development. That’s because the central predicament in Jammu and Kashmir is a political one. The fundamental challenge for India is that too many Kashmiris do not think that the Indian government will adequately safeguard their freedoms and futures. Many Kashmiris would prefer to be independent or a part of Pakistan because they believe India does not have their best interest at heart.

The special autonomy provisions of Article 370 were a means of easing these concerns. India has successfully made this bargain with other states with secessionist movements. For instance, India agreed to the provision of greater autonomy in the state of Nagaland as a way to channel people toward legitimate political mobilization and away from insurgency to hash out their grievances. The central government has repeatedly and successfully traded greater autonomy for stability in northeastern states like Assam to secure the Indian union from breaking apart.

India’s provision of special autonomy to Jammu and Kashmir was an admission that it needed to win Kashmiri hearts and minds. Its decisions on August 5 and its actions since have likely done the opposite.

India’s provision of special autonomy to Jammu and Kashmir was an admission that it needed to win Kashmiri hearts and minds. Its decisions on August 5 and its actions since have likely done the opposite. Article 370 was the primary means by which the Indian government had appeased Kashmiris that their distinct identity and desire for autonomy would not be undermined by the Indian union. Not only is that assurance now gone, its removal is seen by many as a betrayal.

The manner in which India has done this has also inflamed Kashmiri concerns. By arresting mainstream politicians, shutting down phone lines and internet access, instituting curfews, and moving tens of thousands of troops into the already militarized region, India has looked the part of the villain. Indian leaders have argued that these are temporary measures taken to prevent violence, but they feed into the narrative that India is a repressive force. The rigged assembly elections in Jammu and Kashmir in 1987 catalyzed a militancy that has left more than 40,000 dead over the last three decades. The Indian state had overreached, creating widespread frustration about India’s political control. Are we seeing history repeat itself?

The fact that protests that have sprung up across the Kashmir Valley (even with political leaders under house arrest and communications severed) suggests trouble is brewing. India’s decision to detain more than 2,000 civilians without indicating cause is only going to make matters worse. This is a movie we’ve seen run on loop in Kashmir: state repression leads to political alienation, which leads to violence, which invites greater repression. And the cycle continues. Recent media coverage reveals a Kashmir Valley increasingly seething with rage, not only up in arms but also increasingly threatening to take them up. Unless they are bluffing – and history suggests otherwise – Modi’s belief that his decision “will rid Jammu and Kashmir of terrorism and separatism” could be proven horribly wrong.

Similarly, the government’s efforts to bring prosperity to the new union territory will come to naught if there is an active militancy once again. Jammu and Kashmir, which ranked in the bottom third among Indian states in per capita income, is certainly in dire need of economic development. The Modi government has stated that the changes it has made will increase the amount of private investment and government funds coming into the state. Unfortunately, that will only make a difference if Jammu and Kashmir is reasonably stable.

One reason that remains an open question is Pakistan, which is unlikely to accept India’s decisions quietly. Islamabad has failed to marshal much diplomatic pressure against New Delhi thus far. The United Nations General Assembly meetings in New York next month will provide it a critical forum to make its case. If Pakistan ultimately fails to get the international community to intervene – a likely outcome – it may adopt more nefarious means. The country may very well double down on its tactic of supporting terrorism and militancy to destabilize Kashmir. That may be its only option to save face with the Pakistani public.

The mixture of widespread political alienation in the Valley and a Pakistan eager to create disruption could nix any attempts by the Indian government to cultivate a peaceful and prosperous Jammu and Kashmir. Modi may have opened a new chapter in the story, but Pakistan and ultimately the Kashmiri people will determine how it proceeds.