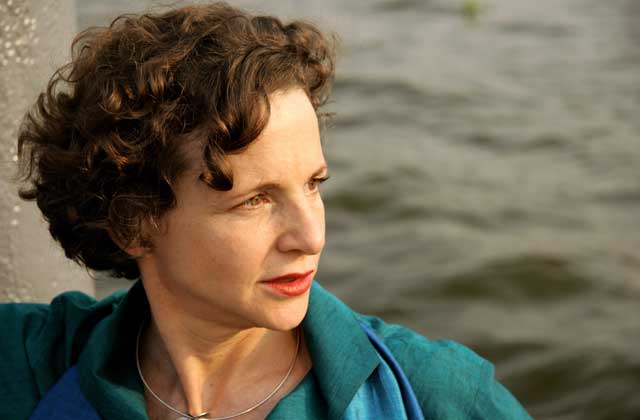 After living and working in Indonesia for 25 years as a journalist, epidemiologist, and public health advocate, Elizabeth Pisani took a sabbatical in 2011 and traveled 26,000 miles around the archipelago. In the resulting book, Indonesia, Etc. (W.W. Norton, 2014) she combines insights into Indonesia's history, culture, religion, politics, and the daily lives of the country's diverse inhabitants into a wide-ranging account that the Wall Street Journal hailed as "a spectacular achievement and one of the very best travel books I have read" and the New Yorker called "exuberant and wise."

Pisani comes to Asia Society New York on Monday, December 15, for an author talk in which she'll be joined by journalist and New York University adjunct assistant professor Margaret Scott. (For those who can't attend in person, the program will also be a live webcast at AsiaSociety.org/Live at 6:30 pm New York time on the 15th.)

In the following excerpts from the Prologue to Indonesia, Etc., Pisani describes the original motivation for her journey of discovery and ultimately confesses that after a year of travel around the archipelago she found "a nation quite different from the one I thought I knew." 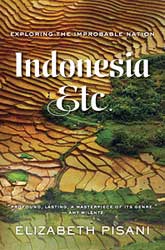 ... When the country's founding fathers declared independence from Dutch colonists in 1945, the declaration read, in its entirety: "We, the people of Indonesia, hereby declare the independence of Indonesia. Matters relating to the transfer of power etc. will be executed carefully and as soon as possible."

Indonesia has been working on that "etc." ever since.

Many countries have struggled to find a raison d'être that goes beyond lines drawn on a map by former colonists. But few have had to mash together as many elements as Indonesia. Modern Indonesia runs around the girdle of the Earth, covering the distance from London to Tehran, or from Anchorage in Alaska to Washington DC. At the north-western extreme on the tip of Sumatra is Aceh, peopled by Muslim Malays with a dash of Arab etched into their features who are proud to call their land "the Veranda of Mecca." Some 5,200 kilometres to the southeast is the province of Papua, which makes up much of the western half of the giant island of New Guinea. . . . The people of Papua and those of Aceh eat different food, pray to different gods, play different music and are of different races. In between, a riot of other cultures is adapting ancient traditions to modern times in wildly different ways.

Today's Indonesia is home to one in every thirty of the people on this planet — 240 million at the last count. That makes the country the fourth most populous in the world. Jakarta tweets more than any other city on earth, and around 64 million Indonesians use Facebook — that's more than the entire population of the UK. But 80 million live without electricity (all of Germany), and 110 million live on less than two dollars a day (all of Mexico). Hundreds of thousands live without electricity on less than two dollars a day and are on Facebook.

The list of "world's biggest," "tens of millions" and "fastest growing" statistics from Indonesia is long. And yet as Indonesian entrepreneur John Riady said recently: "Indonesia is probably the most invisible country in the world."

Certainly when I was first posted to Indonesia by Reuters news agency in 1988, I knew virtually nothing about the country. I had backpacked my way through Java and Bali in 1983, when I was nineteen, and had once dropped in to North Sumatra to visit orangutans. That gave me a set of images to work with: Indonesia was a friendly place, but somewhat schizophrenic. Daily life was shambolic and unpredictable, but on top of the generalized chaos sat a painfully refined culture, all ponderous dancers in delicate batiks twirling their hands to the sounds of gamelan orchestras in the shadow of exquisite temple complexes. Those images were firmly Javanese. In my mind at the time, as in the minds of most foreigners who think about it at all, Indonesia maps on to Java. In a way, that makes sense. Though it takes up just 7 per cent of Indonesia's land mass, Java is home to 60 per cent of all Indonesians. That's 140 million people in an area the size of Greece. The nation's capital Jakarta is in Java of course; Javanese rulers have spread their influence through the many other kingdoms of the islands with varying degrees of success ever since the twelfth century.

In late 2011 I decided to try. . . . A book about Indonesia would give me an excuse to spend more time in the country, to get to know it better, to try to understand how it has changed over the years of my sometimes frustrated devotion. I put the day job running a public health consultancy in London on ice, and made for the islands. I'd start in the south-east of the country, I thought, and travel in a vaguely anti-clockwise direction up through the eastern islands. In the best of all possible worlds, I'd then turn left and head across to Sulawesi, Borneo and Sumatra. I'd close the circle by trailing south-east through Sumatra. I'd leave Java, the island where nearly two-thirds of Indonesians lived, the template for most people's thoughts about the nation, until the very end.

I had a vague idea that I'd like to track down some people that I had met in my earlier incarnations and travels — maybe even the young man who invited me to tea with his dead granny. I was also keen to visit parts of the country that no Indonesian I knew had ever been to. That was the extent of my planning. Because in Indonesia, planning is a mug's game. Boats come three days late or not at all, flights change destinations mid-air, new visa regulations send you dashing unexpectedly for borders, serendipitous encounters sweep you wildly off course.

There was another reason not to plan. I knew that I could never hope to give a full account of this kaleidoscope nation, a nation whose multicolored fragments seem to settle into different patterns with every shake of history and circumstance. Though I wanted to capture the essence of "Indonesianness," to try to find the benang merah, the "red thread" that binds these different islands and cultures into a single nation, I knew the country would change even in the time it would take me to travel it. I was trying to paint a portrait of a nation on the move, and I could only see one fragment of it at any given time.

So I fell back on one of the core principles of my day job as an epidemiologist, the principle of random selection. This holds that if you can't study everyone, the best way to get a picture of what's going on in a large population is to draw a sample at random. Rather than planning where I would go and who I would talk to in advance, I simply trusted that if I got out there and looked through the eyes of enough people in enough places, I'd be able to piece the fragments together into a portrait of the nation as a whole, to understand better the threads that tied the glorious disparity together. I hoped, too, that some of those threads would bind the present snapshot into a larger historical album, revealing some of Indonesia's deep and lasting qualities.

I only had one rule: "Just say yes." Because Indonesians are among the most hospitable people on earth, this made for a lot of yesses. Tea with the Sultan? Lovely! Join a wedding procession? Yes please! Visit a leper colony? Of course! Sleep under a tree with a family of nomads? Why not? Dog for dinner? Uuuuh, sure. This policy took me to islands I had never heard of. I was welcomed into the homes of farmers and priests, policemen and fishermen, teachers, bus drivers, soldiers, nurses. I traveled mostly on boats and rickety-but-lurid buses that blared Indo-pop and had sick-bags swinging from the ceiling. Sometimes, though, I lucked into a chartered plane or rode cocooned in a leather car-seat behind tinted glass. I can count on one hand the number of times I was treated with anything but kindness. I can also count on one hand the number of days that I did not have a conversation about corruption, incompetence, injustice and the slings and arrows of outrageous fortune.

In the end, I spent just over a year traveling the archipelago. I occasionally brushed against parts of the country most frequented by visitors — a beach bar in Bali crowded with well-preserved but slightly leathery white men and honeyed Balinese boys, a Jakarta restaurant catering to bankers and stockbrokers fitting in a quick drink before Wall Street opened and their BlackBerries started buzzing. But as I trekked 21,000 kilometers by motorbike, bus and boat, and covered another 20,000 kilometers by plane, I found these encounters were vanishingly rare. Overall, I visited twenty-six of the country's then thirty-three provinces. Though this book starts with an account of some of the archipelago's previous incarnations, and some of my own early encounters with the Bad Boyfriend, it is largely the story of the Indonesia I discovered on this recent journey. More dizzying in its diversity, but also bound more tightly together in ways that I had not expected, it is a nation quite different from the one I thought I knew.