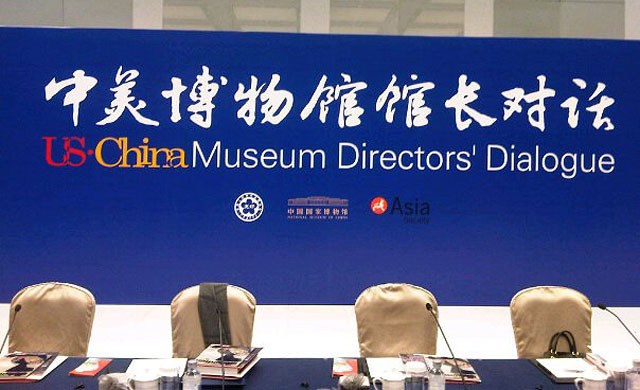 Scheduled for November 16 in Beijing, a dialogue between 15 American museum directors and officials and their Chinese counterparts is a highlight of the 2012 U.S.-China Forum on the Arts and Culture. (Rachel Cooper)

Now underway in Beijing, the 2012 U.S.-China Forum on the Arts and Culture marks a collaboration between Asia Society, the Aspen Institute, and the Chinese People's Association for Friendship with Foreign Countries as a part of a five-year initiative to foster stronger ties between arts organizations in both China and the United States.

"The objective of this forum and our upcoming few days in Beijing is to facilitate better and more meaningful interactions between American and Chinese artists and professionals," says Orville Schell, Director of Asia Society's Center on U.S.-China Relations. "We aim to help create an environment in which our two nations can productively exchange ideas and find meaningful areas of cooperation."

As Asian economies develop and evolve, the ways in which art reaches the public in those countries is likely to change dramatically. The New York Times quotes Asia Society Senior Vice President for Global Arts and Cultural Programs Melissa Chiu:

"In the 20th century we saw most of our significant museums built here in the United States. Now, as we enter the 21st century, we will see many more museums built in Asia, where in China alone the government has spoken of having 1,000 new museums in the next decade."

The three-day forum launched yesterday with a dinner hosted by U.S. Ambassador to China Gary Locke and continues with a series of panel discussions featuring leading museum directors from China and the U.S. before concluding with performances from such luminaries as San Francisco Symphony conductor Michael Tilson Thomas (paired with Chinese pianist Yuja Wang) and award-winning author Amy Tan. More talks will continue in October 2013 at Asia Society's new exhibition space in Hong Kong.

A three-day Forum in Beijing brings together leading American museum officials with their Chinese counterparts.

Visit the website for the U.S.-China Forum on the Arts and Culture for complete information.