Asia Stars in Obama's State of the Union Address 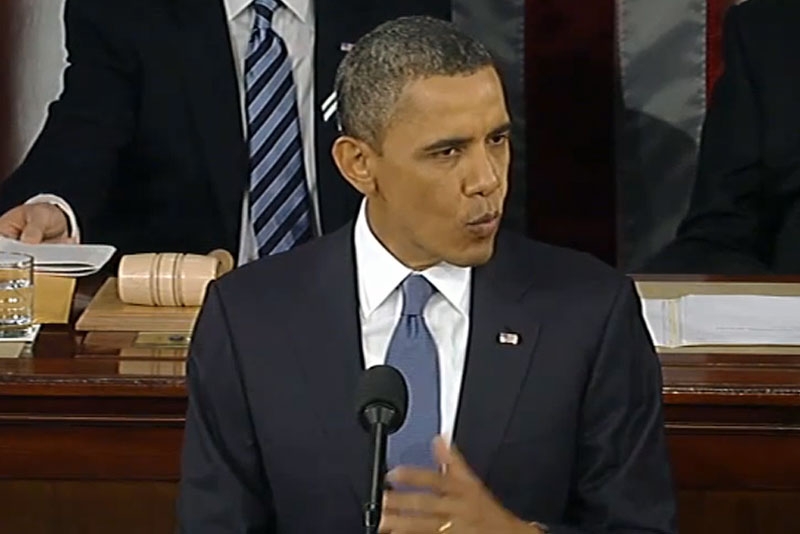 The President's address proves Asia is very much on Americans' minds these days.

The rise of Asia is definitely on the minds of Americans as they try to work their way out of their financial woes and readjust the world's largest economy to some new global realities.

If you need proof, look no further than the State of the Union address President Barack Obama made to the US Congress last night. Economic and educational successes in China, India, South Korea were mentioned repeatedly. He also focused on strategic challenges the US faces in Asia: Iran, the Korean peninsula, Pakistan and, of course, the war in Afghanistan.

Here are some edited excerpts about what the President said in relation to Asia.

"The rules have changed. In a single generation, revolutions in technology have transformed the way we live, work and do business. Steel mills that once needed 1,000 workers can now do the same work with 100. Today, just about any company can set up shop, hire workers and sell their products wherever there's an Internet connection. Meanwhile, nations like China and India realized that with some changes of their own, they could compete in this new world. And so they started educating their children earlier and longer, with greater emphasis on math and science. They're investing in research and new technologies. Just recently, China became the home to the world's largest private solar research facility and the world's fastest computer.

"... the biggest impact on a child's success comes from the man or woman at the front of the classroom. In South Korea, teachers are known as 'nation builders.' Here in America, it's time we treated the people who educate our children with the same level of respect. We want to reward good teachers and stop making excuses for bad ones. Our infrastructure used to be the best, but our lead has slipped. South Korean homes now have greater Internet access than we do. Countries in Europe and Russia invest more in their roads and railways than we do. China is building faster trains and newer airports. Meanwhile, when our own engineers graded our nation's infrastructure, they gave us a 'D.'  Already, our exports are up. Recently, we signed agreements with India and China that will support more than 250,000 jobs here in the United States. And last month, we finalized a trade agreement with South Korea that will support at least 70,000 American jobs.

"Now, before I took office, I made it clear that we would enforce our trade agreements, and that I would only sign deals that keep faith with American workers and promote American jobs. That's what we did with Korea, and that's what I intend to do as we pursue agreements with Panama and Colombia and continue our Asia Pacific and global trade talks.

"Just as jobs and businesses can now race across borders, so can new threats and new challenges. No single wall separates East and West. No one rival superpower is aligned against us.

"In Afghanistan, our troops have taken Taliban strongholds and trained Afghan security forces. Our purpose is clear: By preventing the Taliban from reestablishing a stranglehold over the Afghan people, we will deny al-Qaida the safe haven that served as a launching pad for 9/11. Thanks to our heroic troops and civilians, fewer Afghans are under the control of the insurgency. There will be tough fighting ahead, and the Afghan government will need to deliver better governance. But we are strengthening the capacity of the Afghan people and building an enduring partnership with them. This year, we will work with nearly 50 countries to begin a transition to an Afghan lead. And this July, we will begin to bring our troops home.

"In Pakistan, al-Qaida's leadership is under more pressure than at any point since 2001. Their leaders and operatives are being removed from the battlefield. Their safe havens are shrinking. And we've sent a message from the Afghan border to the Arabian Peninsula to all parts of the globe: We will not relent, we will not waver and we will defeat you.

"Because of a diplomatic effort to insist that Iran meet its obligations, the Iranian government now faces tougher sanctions, tighter sanctions than ever before. And on the Korean Peninsula, we stand with our ally South Korea and insist that North Korea keeps its commitment to abandon nuclear weapons.

"This is just a part of how we're shaping a world that favors peace and prosperity. With our European allies, we revitalized NATO and increased our cooperation on everything from counterterrorism to missile defense. We've reset our relationship with Russia, strengthened Asian alliances, built new partnerships with nations like India."

How well is the US handling its relations with Asia? Rate Obama's speech. Leave your comments below.