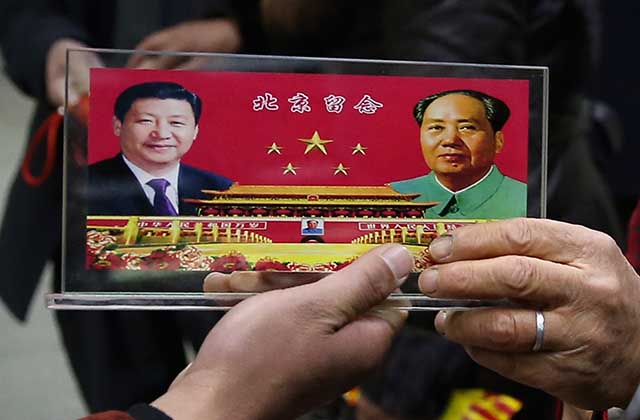 A vendor displays a souvenir with pictures of Chinese President Xi Jinping (Left) and the late Chinese Chairman Mao Zedong (Right) to visitors at the underpass outside the Great Hall of the People. (Feng Li/Getty)

In 1997, then-U.S. President Bill Clinton stood beside his Chinese counterpart Jiang Zemin and said China was "on the wrong side of history" with its human rights record and restrictions on free speech. Twenty years later, China's Communist Party seems confident in its calculation — the country's economy has grown more than 11-fold, it's enjoyed a rare stretch of social stability, and there seem to be few signs of the political trajectory changing. Edward Wong, who reported for the New York Times in Beijing from 2008 to 2016, says that he and other reporters in China often used to question whether certain events would prompt Chinese to challenge their government's legitimacy. "But after having traveled around China to many corners of it, I have to say that Party rule is fairly strong in terms of the way that the people have faith in the central government,” he said while speaking at Asia Society in New York.

In this episode of the Asia Abridged podcast, Wong speaks with Orville Schell, director of Asia Society's Center on U.S.-China Relations, about the Communist Party's "adaptive authoritarianism," China's prospects for political change, and its relations with the United States in the age of Donald Trump.