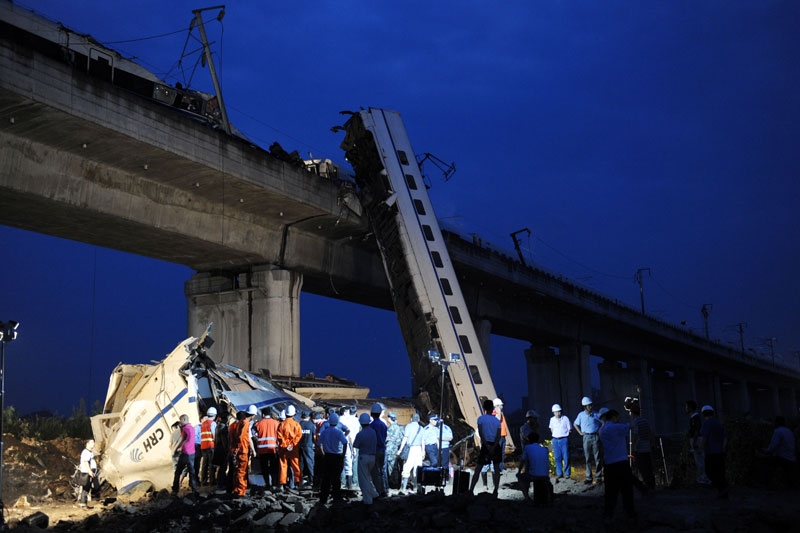 The Asia Society's Dan Washburn asked Jeff Wasserstrom and Evan Osnos to come up with a list of five summer news stories that are particularly important or reveal significant things about China. He invited them to contribute to the blog because they're about to share a stage in Shanghai: their public dialogue, titled "China on the Move," will be held at the M on the Bund restaurant on September 8 as part of M's "Cosmopolitan Conversations" series. How better to get ready for a live dialogue than by writing something back and forth?

JEFFREY WASSERSTROM: We quickly hit a roadblock after getting Dan's question, despite reaching agreement pretty quickly about what would go on the list: 1) The rumors of Jiang Zemin's death that circulated in early July; 2) The high-speed train crash later that month near Wenzhou; 3) Beijing's response to the acrimonious U.S. debt debate; 4) The NIMBY (Not-In-My-Backyard) protests in Dalian that caused the closing of a chemical plant; and 5) Online chatter about seemingly ordinary things that were done in China by the new American Ambassador and Vice President Joe Biden. The problem arose when we tried to divvy the work up, as neither of us claims to be a math whiz, but even we know five doesn't divide neatly in two.

Fortunately, we remembered that I had already written a post for this very site on the Jiang Zemin death rumors, which proved unfounded but were nonetheless important, since they offered a clear reminder of just how much a black box the world of China's most powerful individuals remains. They also highlighted the ease with which misinformation can gain traction in a country with very little transparency. Since it's already been discussed on this site, we won't write anything about the death rumors here, just tell those interested in learning more to go to this link. That leaves us with four items, which we'll take turns describing, with me starting out with the Wenzhou collision.

The crash, which involved a stalled train being hit by a speeding one, is probably the item whose inclusion on a list like this is easiest to defend, and the one I'll be most likely to highlight if Oxford lets me publish an updated version of my China in the 21st Century: What Everyone Needs to Know. The suffering the crash caused to riders was horrific, with an official death toll that stands at 40 and many more people injured, some very badly.

There's more to the story than that, however, due to the way the Chinese authorities have elevated high-speed trains into a symbol of the country's modernization drive and the ham-handed manner in which the government tried to cover up what had happened in the immediate aftermath of the collision. A sense that the Communist Party had misled the population about the safety of high-speed trains and efforts to keep journalists from covering a story that was obviously newsworthy triggered what some have called a tsunami of online expressions of outrage. China's Twitter-like microblogs were filled with comments lambasting the authorities for their lack of concern for the well-being of ordinary people and their obsession with pet projects and secrecy.

EVAN OSNOS: Someday, when archeologists search for signal moments in the evolution of American and Chinese perceptions of each other, they just might linger on the Washington debt crisis of 2011. The budget impasse confirmed some of China’s less charitable impressions of American political life. As I mentioned on newyorker.com, Timothy Geithner tried to bring the squabbling to a halt by warning that "the eyes of the world are on us." He was right. Among the top discussions the next day on a popular forum hosted by the People's Daily was a string that tied the debt impasse to a summer-lunch program for American students: “What the hell!” a commentator wrote. "The U.S. owes China God-knows-how-much money and now it's giving free lunch to its children." Even after a deal was struck, America’s AAA credit rating was cut by Standard & Poor's, and the Chinese press indulged in the schadenfreude. As Xinhua put it, "All Americans, both Beltway politicians and those on Main Street, have to do some serious soul-searching to bring their country back from a potential financial abyss." It was opportunistic and, safe to say, far jauntier than China's economic policymakers actually feel about the vulnerabilities in their own economy. But the tone offered a glimpse into the subtle, and not-so-subtle, evolution in the balance of perception and power.

JW: Turning back to a Chinese domestic story, the Dalian protest of August 14, a dramatic event that saw tens of thousands of largely middle-class residents converge on the city's main public square, are important in part for a reason that the train crash was significant. That is, they too underscore the expanding role of social media as a political force. We still don't have a clear picture of how exactly the demonstration unfolded, despite excellent reporting by people like Jon Watts of the Guardian and Foreign Policy's Christina Larson, but we do know that online messages played a major role in getting people to the square and that many of them came to the protest carrying digital cameras, so that they could take photographs of the action and post these on the Web.

The protests also matter in a couple of other ways. Like similar NIMBY demonstrations in other cities, such as a 2007 Xiamen one that led to the relocation of a chemical plant and the 2008 Shanghai ones triggered by plans to extend the Maglev train through the center of the city, they show us that quality of life issues are increasingly inspire people to take to the streets. They also show that the Communist Party, which has had to contend with tens of thousands of outbursts of collective action every year of the 21st century, can no longer count on these taking place mainly in places that are being left behind by the reforms and involving mostly people who are relatively disadvantaged. Xiamen, Shanghai, and Dalian are all places that have benefited a good deal from the economic boom and the people joining the marches there have tended to be people doing fairly well, not badly, in material terms.

Where this all will lead is impossible to say — there's still no sign of any Chinese counterpart to the Arab Spring brewing, and Western headlines likening the Dalian protests to the "People Power" demonstrations that toppled a dictator in the Philippines were hyperbolic — but greater restiveness on the part of the middle class and growing concern over public health and environment issues among plugged in urbanites are definitely things to watch.

EO: Joe Biden came to China at an opportune moment for his brand of retail politics. Throughout the summer, the Chinese domestic meme of the moment was the public demand for humility from those in power. In a typical case that whipped around the Chinese Web last spring, a bus in Hebei province carrying the mayor rushed through a red light and hit a fourteen-year-old student. The student was left disabled; the mayor skipped going to the hospital; Chinese commentators raged. More recently, the government spokesman after the Wenzhou train crash brushed aside reporters' questions with a flip of the hand and a now-famous line about his version of events: "Regardless of whether or not you believe it; either way, I believe it."

In contrast, Biden's handlers adopted a strategy straight out of Scranton: In Beijing, he dined at a local restaurant that specializes in intestine soup. (He ordered noodles instead, and left a tip. Since then, tourists have been turning up at the place asking for the "Vice Presidential special" and the café has had to hire more staff.) It was a quirky move that generated goodwill — enough goodwill that it helped crowd out the inconvenient timing of a basketball brawl the next night between U.S. and Chinese players.

Evan Osnos is the New Yorker’s Beijing bureau chief and 2007 winner of the Asia Society’s Osborn Elliott Journalism Prize. Jeffrey Wasserstrom is Chair of the History Department at UC Irvine and an Associate Fellow of the Asia Society. They will appear together in Shanghai at M on the Bund on September 8, and they are both contributors to the anthology Chinese Characters: Fast-Changing Lives in a Fast-Changing Land, to be published next year by the University of California Press.