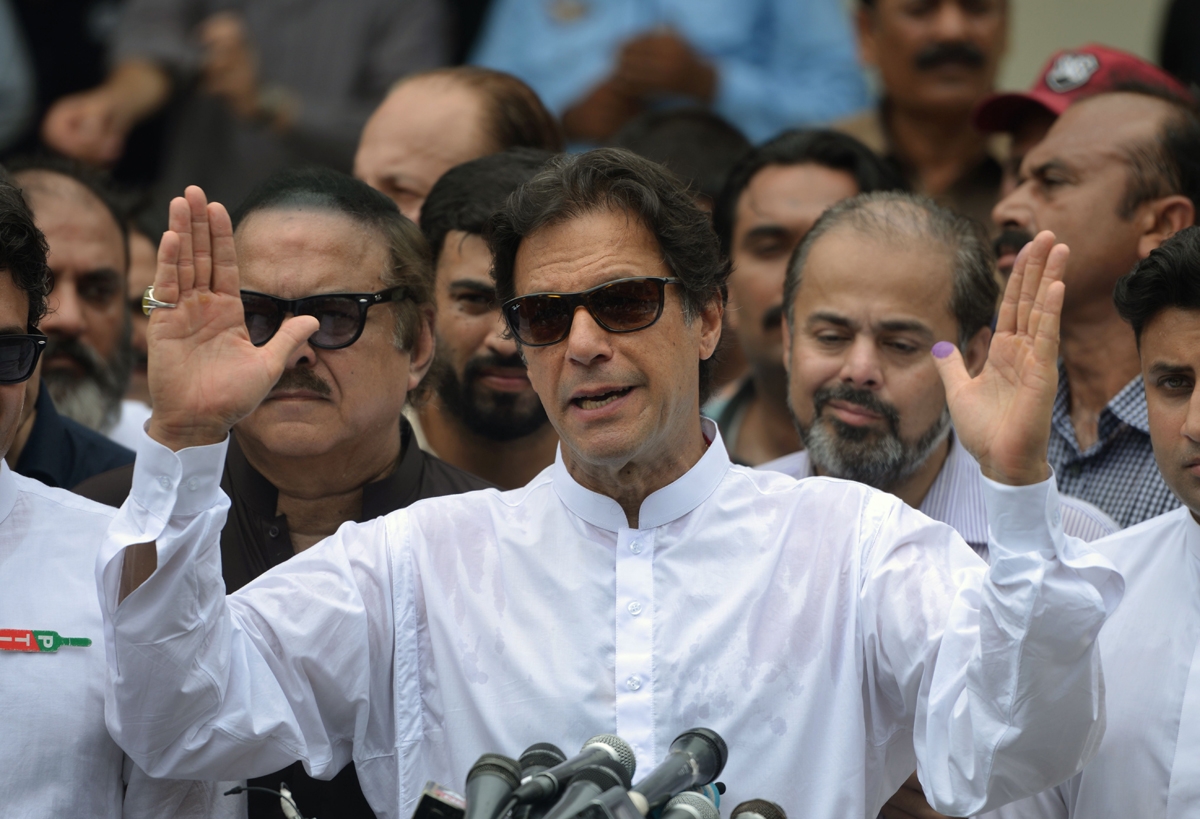 Imran Khan, a star athlete turned politician beloved by his countrymen, once languished on the periphery of Pakistani politics. No longer. On Saturday, Khan was sworn in as Pakistan's newest prime minister, placing the outspoken and controversial figure at the center of political life in his country.

Khan ran a populist campaign focused on transforming Pakistan, a developing country whose citizens were tired of corruption and hungry for better governance. And while his status as an international cricket star cemented him firmly in the Pakistani elite, Khan successfully portrayed himself as an outsider and reformer because he was not a part of the two family-run parties that have dominated the country's politics in recent history.

Now that Khan is in office, what's next? Here are some questions about what lies ahead for Pakistan under its new leader.

What does Khan’s election victory mean for Pakistan’s democracy?

Khan’s victory marked Pakistan’s second-ever peaceful and democratic handover of power; so in a real way, the election was a success simply because it did not result in violence. In another positive sign, some of the most radical Islamic parties with connections to militants fared poorly.

Nevertheless, Khan’s was a tainted victory — at best. His election campaign was fraught with controversy and irregularities, chief among these the treatment of the opposition party PML-N, whose leader Nawaz Sharif was booted out of the prime ministership and barred from running due to a corruption case. Both of the major opposition parties, PML-N and the PPP, argued that the army exerted undue influence over the judiciary and the media in an attempt to favor Khan’s PTI party.

This leaves Pakistan’s democracy, yet again, in a precarious situation. Khan has spent the better part of the past decade protesting against and calling into question many of the institutions he will now lead. When he begins to govern, will he continue to undermine the credibility of these institutions or work to raise their effectiveness? If allegations surrounding Khan’s chumminess with the military prove legitimate, Pakistan’s institutions, which embody both the country’s democracy and its machinery of governance, will continue to be frail.

For his part, Khan isn’t exactly trying hard to dispel the image that he’s close to the military: His cabinet selections include a number of former officials who held senior positions during the reign of Pakistan’s last military leader, General Pervez Musharraf.

What will be Khan’s biggest challenge?

Pakistan is hurtling towards a balance-of-payments crisis that will certainly be Khan’s first major test as prime minister. Pakistan’s foreign reserves have been significantly depleted over the past two years as a result of high oil prices and increased imports in an unstable global economy — the country’s central bank has had to devalue the rupee four times since last December. Low on cash and heavily reliant on imports, Pakistan will struggle to sustain economic growth. In recent years, its trade deficit has also ballooned: According to Bloomberg, the current account deficit rose 42 percent in the first half of 2018 alone.

Some economic analysts predict that Pakistan will have to turn to the International Monetary Fund (IMF) for a bailout, which it has already done 12 times since the 1980s. Under this scenario, the IMF would loan money to Pakistan so that it can resolve its immediate credit crunch. However, the loan would come with demands for major structural reforms, which, while beneficial to Pakistan’s economy in the medium and long term, might be painful to Pakistanis in the short term by causing cuts in public services and slower growth. A significant tightening in fiscal policy would also prevent Khan from delivering on some of his signature promises, including a pledge to help the country’s poor through an Islamic welfare program and the creation of 10 million jobs. If these promises don’t materialize, Khan's political skills will be tested like never before, as he sells what will be very bitter medicine to a population whom he promised a “new Pakistan.” Little wonder that in his first speech as prime minister, Khan warned the nation of upcoming austerity measures.

In his victory speech, Khan struck a conciliatory note toward India, saying, “if India takes one step, we will take two” to improve relations. The problem is that Khan doesn’t control the legs of the Pakistani state — at least not when it comes to foreign policy. Both of his civilian predecessors tried to improve ties with India, only to find that the Pakistani army has a vice grip on most critical national security issues, including relations with New Delhi. The Pakistani military genuinely sees India as a grave threat — if also a convenient cudgel that allows the military to maintain its preeminence in Pakistani politics. Unless the Pakistani military alters its strategic calculus about India or its own place within the Pakistani state, the world shouldn’t hold its breath that Pakistan will be taking one step — much less two — under Khan.

This is why the Indian security and foreign policy establishments reacted to Khan’s election with a collective shrug. Real dialogue in the near future, especially with India approaching its own elections next year and Khan facing far more pressing challenges at home, is unlikely. Pakistan’s economic crisis could also force Khan to increase Islamabad’s dependence on China, which would only complicate already tense ties with New Delhi.

If one is desperately searching for a glimmer of hope, it may lie in the fact that Khan has had a lot of exposure to India and its people from his days as an international cricket star. If he realizes that India isn’t the existential threat it’s made out to be in Pakistani politics, perhaps he is being genuine when he says he wants improved ties. While he may not be able to deliver, it is possible that he will at least not go out of his way to damage relations further.

How will U.S.-Pakistan relations fare under Khan?

As with India, Khan will likely have to cede a degree of control over Pakistan’s relationship with the  U.S. to the Pakistani army. He will be limited by the immense skepticism with which much of the Washington D.C. policy elite views him. Khan's consistent condemnation of the United States and its drone and counterterrorism policies, as well as what is viewed as his insufficient criticism of militancy in the region, has alienated policymakers in the U.S. — where confidence in Pakistan is already dismal.

The Trump administration decision to cut military aid to Pakistan was a signal that the U.S. is finally ready to take more punitive action in response to Pakistan’s support of militancy in Afghanistan. If Khan continues to demonize Washington and dismiss U.S. concerns about terrorism, it’s possible the United States could take further action. If he visits the United States as prime minister for the first time this fall, Khan has an opportunity to charm his guests and start building some trust. To do so, he will have to veer off his usual anti-Western script. His public statements during that visit might signal his intentions better than anything we have seen or heard thus far.