In 2012 it Was Full Speed Ahead on China's Rails 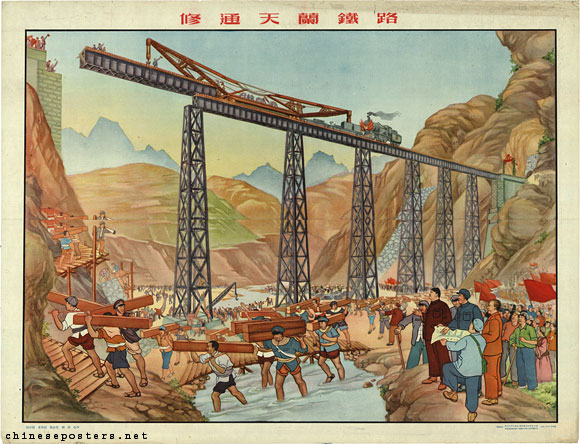 The newest link in China’s ever-expanding high-speed rail (HSR) network is the Beijing-Guangzhou line, which opened today, December 26 — Mao Zedong’s birthday. Trains will whisk travelers from the frozen north (today's high temperatures was 21 degrees Fahrenheit in Beijing) to the balmy south (it was closer to 70 in Guangzhou) in about eight hours. Currently, the fastest train between the two cities requires 20 hours, 31 minutes to complete the nearly 2,300-kilometer journey.

It would almost surely still make more sense to fly (Beijing to Guangzhou takes about three hours, unless you get caught in one of China’s frequent flight delays), but the Chinese government hasn’t made air travel a priority in the way that it has pushed for high-speed trains. Over the past five years, the HSR network has blossomed throughout China’s eastern half, shortening travel time and reducing the need for overnight sleeper trains, once the quintessential China travel experience for foreigners.

This continued expansion has come at a cost: scandal and tragedy hit the Chinese railway administration in 2011. Scandal arrived in February of that year, when the Minster of Railways, Liu Zhijun, was arrested amid allegations of massive corruption (described in gruesome detail by The New Yorker’s Evan Osnos). Though Liu has not been tried yet, there’s no doubt that he’ll be found guilty. The tragedy was the July 2011 collision between two HSR trains near the city of Wenzhou, which killed 40 people and injured almost 200 more. In the wake of Liu’s arrest and the Wenzhou accident, the government pulled back on construction of new lines. It seemed, for a time, that China might slow down.

No longer. In 2012, HSR growth once again forged ahead, with a line linking Shanghai and the western city of Kunming due for completion in 2013. As China’s economy falters, building new railways serves as an important economic stimulus mechanism, with the state pumping money into construction projects. And the government can respond to critics by pointing out that, even amid safety concerns, HSR attracts riders: a World Bank report published this year found that a significant percentage of passengers on China’s HSR lines represented “generated” trips — journeys that they were induced to take by the attractiveness of improved rail service. I’ve spent about 20 hours on high-speed trains in the past month, and every one of them was packed with passengers, without an empty seat in sight.

I can’t shake the feeling, though, that the Chinese leadership is more excited about HSR as a project than as a service to offer its citizens. This new network is the latest big endeavor that shows off China’s ability to mobilize money and manpower in pursuit of superlatives — “the best, the longest, the fastest.” It’s not evenly distributed around the country, but instead follows a rough north-south corridor in China’s wealthier eastern regions. And in many places, the HSR routes are replacing older, slower, and cheaper trains rather than running parallel to them, placing a financial burden on poorer riders. (For an American analogy, imagine if Amtrak stopped running regional trains along the Northeast Corridor and forced everyone to ride the Acela Express instead.)

I find it appropriate, then, that Mao’s 119th birthday has been chosen as the date for the debut of the Beijing-Guangzhou HSR line, since the Great Helmsman was no slouch when it came to promoting blockbuster projects carried out in a forceful campaign-style manner. Though Mao sought to purge technocrats from the CCP during the Cultural Revolution, Chinese rail routes nevertheless doubled in length during the 27 years he led the country, and new construction included lengthy railways extending into remote and often mountainous western regions. The HSR lines of today are descendants of those Mao-era projects, and it seems that neither corruption nor tragedy will slow them down for long.

Looking forward to 2013, I expect to see the country’s leadership continue to hurtle forward along the path of high-speed rail development, with little regard for whether or not China’s citizens are on board.