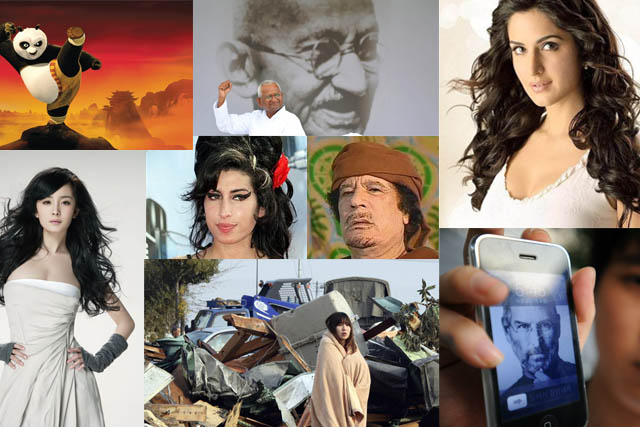 As 2011 draws to a close, Google has released its Zeitgeist site, a year-end tradition which reveals the top searches made on Google around the world. Categories included are most-searched terms, celebrities, brands and news stories. You can watch how the world searched Google in the video below.

Justin Bieber was declared Google’s Most Popular Person of the year and the loved/hated “Friday” singer, Rebecca Black, was the fastest rising search globally. Steve Jobs searches increased by 982% in 2011, making the tech luminary the ninth fasted rising search on Google.

Searches for the Japanese earthquake and terms related to it showed up on popular lists for around half of the nearly 50 countries included in Zeitgeist. "東京 電力" (“TEPCO”, owners of the Fukushima power plan), became the first query not using the Latin alphabet to ever make the global fastest-rising list.

Across Asia, Steve Jobs dominated most of the Fastest Rising People lists and terms "iPad 2," “Libya” and “Gaddafi” also appeared in the top five most searched terms in Singapore and China.

Take a look at how Asian nations searched the world below.

The most searched term in mainland China was the Japan earthquake followed by Naked Marriage Age, a TV drama which depicts a young married couple struggling to make ends meet.

Chinese actress Yang Mi was the most searched person of 2011, followed by Steve Jobs, and Guo Meimei, a 20-year-old who bragged about her luxurious lifestyle and tied it to the Red Cross Society of China.

Bollywood star Katrina Kaif continued her reign as the most searched celebrity in India, beating anticorruption leader Anna Hazare who moved the masses to protest this year. Hazare did top the Fastest Rising People list followed by Poonam Pandey, who created a frenzy online when she promised to pose nude if India were to win the World Cup Cricket (which they did and Pandey did not). Steve Jobs came in third in a list most commonly dominated by entertainers.

It should come as no surprise that the fastest-rising Google search was "earthquake," and related terms like "power outage" and "nuclear power plant." The fastest rising people were the Japan women's soccer team, Nadeshiko Japan, who beat the United States in a penalty shootout in the final to become world champions for the first time. Taking second place is TV host Shinsuke Shimada, who admitting ties to Japan's equivalent of the mafia.

Here are other lists from Asia:

You Are the Apple of My Eye

Find out how South Korea, Taiwan and Thailand searched the world.