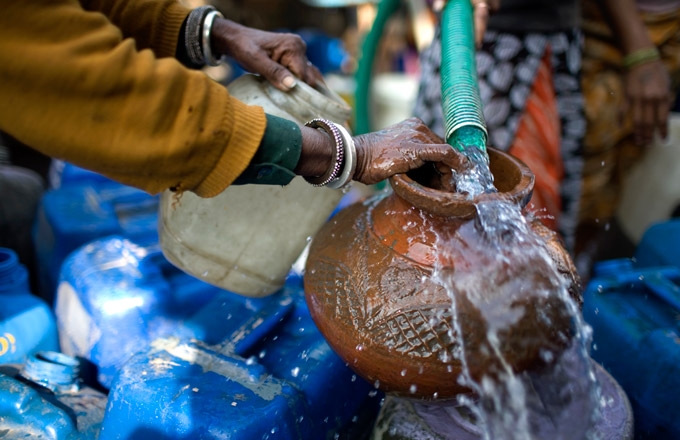 Decreased access to a safe, stable water supply in Asia "will have a profound impact on security throughout the region," warns a new Asia Society Leadership Group report. In response to the cascading set of consequences reduced access to fresh water will trigger—including impaired food production, the loss of livelihood security, largescale migration within and across borders, and increased economic and geopolitical tensions and instabilities—the report recommends a comprehensive strategy to avert a regional crisis.

The global demand for freshwater is soaring as supply is becoming more uncertain. Today, one out of six people—more than a billion—do not have adequate access to safe water. The United Nations projects that by 2025, half of the countries worldwide will face water stress or outright shortages. By 2050, as many as three out of four people around the globe could be affected by water scarcity.

Water-related problems are particularly acute in Asia. Although Asia is home to more than half of the world’s population, it has less freshwater—3,920 cubic meters per person per year—than any continent other than Antarctica. Almost two-thirds of global population growth is occurring in Asia, where the population is expected to increase by nearly 500 million people within the next 10 years. Asia’s rural population will remain almost the same between now and 2025, but the urban population is likely to increase by a staggering 60%.

As population growth and urbanization rates in Asia rise rapidly, stress on the region’s water resources is intensifying. Climate change is expected to worsen the situation significantly. Experts agree that reduced access to freshwater will lead to a cascading set of consequences, including impaired food production, the loss of livelihood security, large-scale migration within and across borders, and increased economic and geopolitical tensions and instabilities. Over time, these effects will have a profound impact on security throughout the region.

Through this report, the Asia Society’s Leadership Group on Water Security aims to raise awareness of the importance of water as a means of security at multiple levels in Asia. We take as our immediate point of departure the Asian Water Development Outlook 2007, an assessment of Asia’s possible water future published by the Asian Development Bank in cooperation with the Asia-Pacific Water Forum1. The Outlook emphasizes that the majority of Asia’s water problems are not attributable to an actual shortage, but rather are the result of poor water governance. As such, they are solvable through more effective governance and better management practices.

Our goal is to build on the far-ranging findings presented in the Outlook by considering the security dimensions associated with decreased access to a safe, stable water supply in Asia. The term “security” is often used to connote conflict, but it has a much broader meaning for the purposes of this effort. The nexus between an essential resource such as water and security encompasses individual physical safety, livelihoods, health and human welfare, as well as a realization of the cooperative potential between nation-states and subnational jurisdictions. The report highlights the significance of water as a source of livelihoods, a vector of pathogens, a potent force behind extreme events and natural disasters, and also a mechanism for cooperation among governments and communities.

The report also draws attention to some of the most significant current and future water- related challenges facing the region—from water disputes involving hostile states such as India and Pakistan to water conflicts in China’s villages and provinces resulting from agricultural and industrial pollution, and from the alarming rise in waterborne diseases, especially among children, in Indonesia attributable to inadequate wastewater facilities to the negative impact that climate change will have on Asia’s glaciers, which for many countries are the primary freshwater source. The scope and scale of these problems demonstrate in stark relief that no matter how we approach water resources—whether it is on the basis of quality and quantity, or as the most potent manifestation of extreme climatic events—hydropolitics is likely to be a growing force in Asian security that will require a broader understanding of and strengthened institutional capacities for water governance.

This effort does not seek to “securitize” water. Indeed, the problems highlighted in this report cannot be addressed by traditional tools of national defense. However, the current approach, which views water scarcity and quality issues through a predominantly environmental lens, is not sufficient either. The U.S. National Intelligence Council’s Global Trends 2025 report has forecasted that “cooperation to manage changing water resources is likely to become more difficult within and between states” in Asia2. The emerging picture underscores an urgent need to reframe the debate and to begin looking at these issues in a more comprehensive way that takes into account the complex national security and development challenges that countries and communities will face as water scarcity intensifies.

Solutions are well within reach, but they will require high-level political will and a sufficient amount of investment. Governments need to develop coherent national responses and policies to simultaneously address multiple problems, with the aim of reducing security risks and vulnerabilities and providing economic benefits, such as investments in infrastructure for water conservation and management. Countries should forge a regional approach in which governments and other key stakeholders, including nongovernmental organizations, civil society groups, and businesses, work together to clarify responsibilities and coordination mechanisms to address water security concerns.

The Asia Society’s Leadership Group recommends a ten-point agenda to avert a water crisis in Asia:

Raise the profile of water security on the political and developmental agendas of national governments in Asia. There is an immediate need for governments in Asia to strengthen their capacities to engage in preventive diplomacy focused on water and to start setting policies and making investments in support of infrastructure for water conservation and management. A substantial package of financial support, including public and private funds, should be established, and greater coordination between relevant government ministries should be pursued.

Include water in security policy planning. Governments in Asia should ensure that water management organizations have direct communication with defense agencies and develop integrated water management and conflict prevention capacities where needed. Conflict avoidance and resolution mechanisms to address intra- and transboundary water issues should be developed. Disaster-warning systems and international coordination in response to water-related disasters should be strengthened.

Encourage investment in and increased collaboration on water management technologies. Emphasis should be placed on spurring greater investment in the infrastructure and knowledge systems needed to manage complex water systems for the benefit of all. Incentives are needed to increase developing-country adoption of, and private-sector investment in, technologies that advance water security, such as improved methods to desalinate water, low-cost drip irrigation, and new crop varieties that can tolerate low water levels and drought.

Generate better policies through dialogue. Policy makers at every level, as well as nongovernmental organizations, civil society groups, and private enterprises, must be stakeholders in the responsible management of water resources. As part of this effort, best practices drawn from local leaders across sectors and societal spheres who are advancing sustainable water management practices and models of mediation and conflict resolution to address water- related disputes should be collected and disseminated.

Address the emerging water crisis through a post-2012 climate agreement. Measurable and verifiable targets to reduce greenhouse gas emissions should be adopted by all countries, and adaptation is necessary to lessen the impacts on water resources resulting from global warming. This will require forward-looking investment and far-sighted policies that go beyond short-term responses to current climate variability.

Utilize the Intergovernmental Panel on Climate Change (IPCC) data on water and climate change to develop early-warning systems. There is a vast amount of scientific research under way on climate change and water availability that is accessible through the IPCC. This information needs to be linked to the development of early-warning systems on a regional level to consider the impacts of desertification, sea-level rise, and other consequences related to climate change.

Develop concrete ways of implementing existing statements and regional agreements such as the Asia-Pacific Water Summit Declaration of 2007. Existing efforts at the ministerial level among Asian countries to support water management, such as the Asia-Pacific Water Summit, which unanimously issued the Beppu Declaration in 2007, should be supported and implemented.

Expand the Water Financing Partnership Facility initiated by the Asian Development Bank. The Water Financing Partnership Facility was initiated by the Asian Development Bank to provide financial and technical support in the areas of rural and urban water services and river basin water management, including adaptation to climate change. The initial commitment of US$26 million needs to be supplemented with private-sector support and market incentives to sustain this effort across Asia.

Harmonize the Millennium Development Goals that pertain to water under a unified United Nations Economic and Social Commission for Asia and the Pacific (UNESCAP) task force on rapid implementation to meet the 2015 targets in Asia. The Asian Development Bank’s Asia Water Watch 2015 study estimated that annual investments of US$8 billion will be needed to meet the Millennium Development Goal targets for safe drinking water. A coordinated strategy that links the goals through water management is needed and can be initiated by a task force managed by UNESCAP for the Asian region.

Improve data quality in order to generate better policies. The lack of accurate water resource data across Asia is an impediment to effective policy making. To address these shortcomings, the United Nations should be endowed with a data-collection capacity that is authorized to gather water quality data worldwide, similar in scope to the data collected on nuclear issues by the International Atomic Energy Association (IAEA). The development of indices for comparisons of water resource performances across countries, as initiated by the Asia-Pacific Water Forum, should be expanded with greater institutional support.

These recommendations are not meant to be exhaustive, but rather are indicative of the scope and precision of the efforts needed to tackle the water challenges facing Asia. The good news is that the vast majority of the water-related problems plaguing Asia are solvable through environmentally and politically sustainable water management, and the technologies and policy tools that are required to make progress are well known. What is needed now is action. With effective planning and leadership, this resource crisis can be transformed into a catalyst for lasting cooperation between countries and across communities.