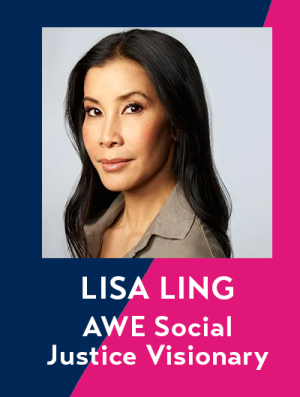 Lisa Ling is the Executive Producer and host of THIS IS LIFE on CNN, now in its eighth season. For the show, Lisa has embedded with a notorious biker club and explored the medicinal use of psychedelics in psychotherapy.

For five seasons prior, Lisa executive produced and hosted Our America on OWN. She was also a field correspondent for The Oprah Winfrey Show and contributor to ABC News’ Nightline. For these shows she reported from dozens of countries; covering stories about gang rape in the Congo, bride burning in India and the Lord Resistance Army in Uganda, among other issues that are too often ignored.

Lisa was the first female host of National Geographic’s flagship show Explorer which sent her to cover the phenomenon of female suicide bombing, the spread of the MS-13 gang –considered the world’s most dangerous gang, and the humanitarian crisis inside North Korea.

She got her start in journalism as a correspondent for Channel One News where she covered the civil war in Afghanistan at 21 years of age. She later went to become a co-host of ABC Daytime’s hit show The View, which won its first daytime Emmy during her time at the show.

Lisa will Executive Produce and host the upcoming series TAKE OUT for HBO Max, an exploration of Asian American history through the lens of delicious Asian food which has become so ubiquitous in the U.S.

Lisa is the co-author of Mother, Sister, Daughter, Bride: Rituals of Womanhood and Somewhere Inside: One Sister’s Captivity in North Korea and The Other’s Fight to Bring Her Home, that she penned with her sister Laura.

In 2014, President Obama appointed Lisa to the Commission on White House Fellows. She is an advisory board member for The First Partner of California’s CA Partners Project, Fostering Media Connections, the Cayton’s Children Museum and a Baby2Baby angel.

Lisa live in Santa Monica with her husband Paul Song and daughters Jett and Ray.