The An Family - AWE Culture Visionaries 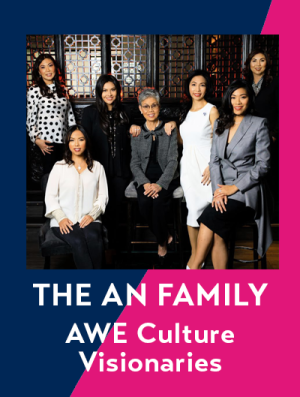 Helene An is a native of Vietnam who arrived in the U.S. in 1975 after the fall of Saigon. She initially worked with her mother-in-law Diana to open San Francisco’s first Vietnamese restaurant, Thanh Long, and now works with her five daughters, Hannah, Elizabeth, Monique, Jacky, and Catherine, and granddaughter Bosilika, to run a full portfolio of restaurants. Along with Thanh Long, still in operation in San Francisco, the House of AN restaurant empire includes Crustacean, Crustacean San Francisco, AnQi by Crustacean, Tiato, and Đà Lạt Rose, a unique “gastro biography” tasting menu concept which opened in 2019. House of AN launched An catering in 2007. The cookbook An: To Eat was released in 2016. The An family will be celebrated as AWE Culture Visionaries for their inspiring American success story and tremendous impact on the Los Angeles culinary scene and beyond.

Helene An was the first to introduce Vietnamese cuisine to mainstream America. She was acknowledged as the “Mother of Fusion Cuisine” when recognized with the prestigious 2019 Pioneer Award in Culinary Arts from the Smithsonian Museum. House of AN was honored with the “Family Business Award of Excellence” at the 2013 Ernst & Young Entrepreneur Of The Year Awards. The youngest of the five daughters, Catherine An, leads the catering division. Hannah An, the eldest, manages operations of the three Southern California restaurants. Based in San Francisco, Monique An supervises operations for Thanh Long and Crustacean San Francisco, and Jacky An, in New York, works with handling the company’s finances. Elizabeth An, the second eldest daughter, runs the AnQi restaurant, as well as oversees marketing and design concepts and business development for House of An’s growth and expansion.