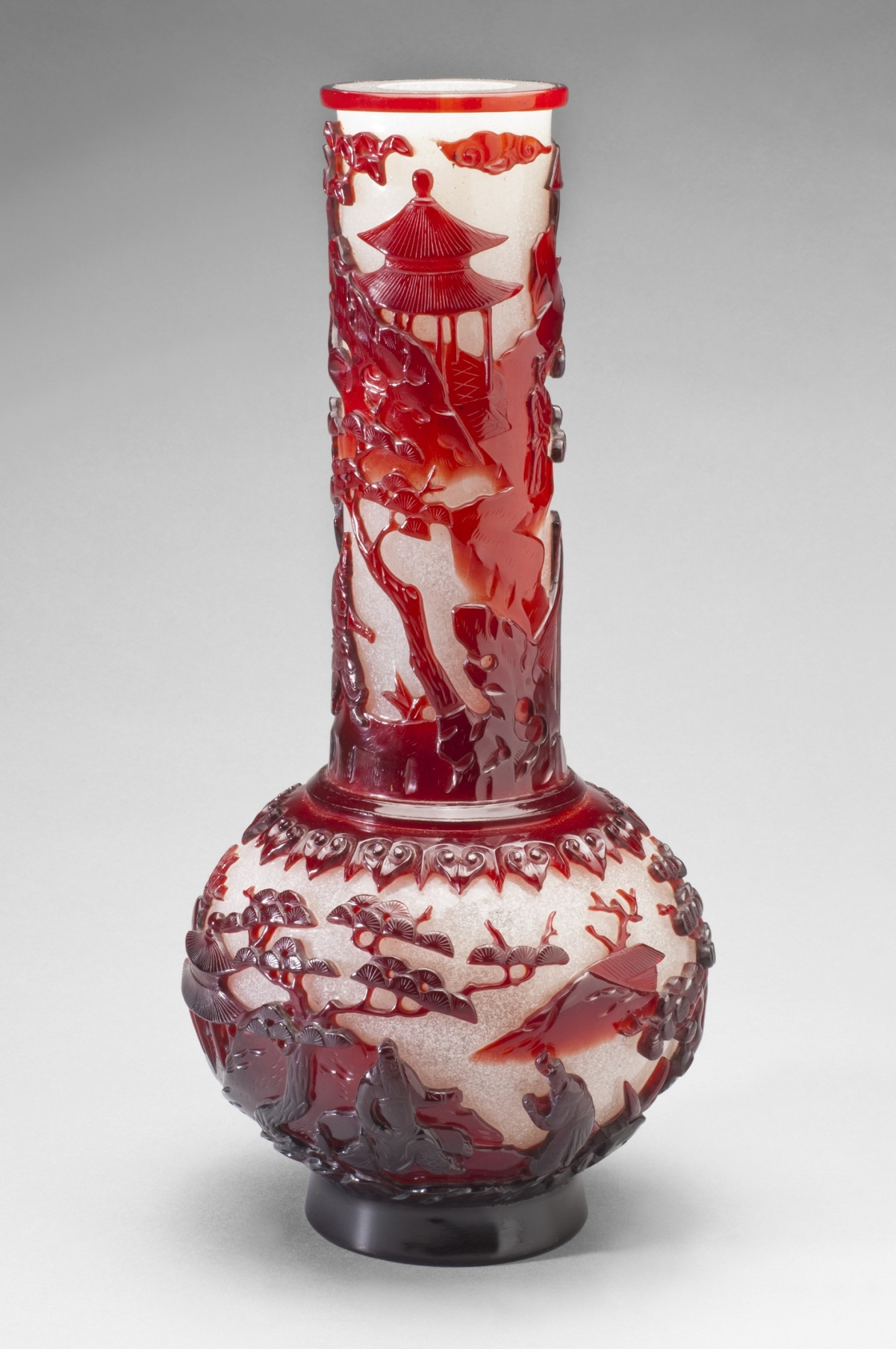 Asia Society Museum presents a small, focused exhibition centered on a rare, woodblock print masterpiece of a Chinese map, dating to the 1780s or early 1790s. Unique in scope, Ma Junliang’s Capital Edition of a Complete Map (of the World Based on) Astronomy (Jingban tianwen quantu) illustrates the nature of intellectual exchange between imperial China and European Jesuit missionaries in the late eighteenth century. The exhibition—which comprises the map and a selection of decorative and functional objects—highlights consequences of cross-cultural encounter and is part of Asia Society Museum’s In Focus series, which invites viewers to take an in-depth look at a single, significant work of art and explore its context. The exhibition is on view February 5 though May 5, 2019.

The large map on display is a one-sheet compilation of three very different maps combining Eastern and Western understanding of the world. The two smaller maps at its top incorporate historical maps from European and Asian sources and act as a testament to sharing knowledge in the eighteenth century. The large map below is Ma’s rendition of the Qing dynasty empire and beyond, which details mountain ranges, rivers, lakes, and deserts.  It also includes overland travel routes and even prominent landmarks like the Great Wall. It offers a historical statement of power that places China at the world’s center that still resonates today. Also on view are exquisitely-crafted eighteenth century decorative objects that feature novel combinations of Chinese and European imagery, which showcase the result of scientific and technical exchange between skilled craftsmen at Chinese court.

In the eighteenth century, the Qing dynasty reached its greatest geographical expanse, extending its control in the southwest as well as including large portions of Central Asia. Increased Chinese imperial interaction with the outside world and interest in western scientific and technical knowledge from the late sixteenth through the eighteenth centuries led to an expansion of geographic knowledge and significant engagement with European learning. Combining eastern and western studies—including exchanging knowledge of astronomy, geometry, physics, medicine, and anatomy—both Chinese and European cartographers were able to fill great gaps in their understanding of the world.

Contact with Europe led to the presence and later the employment of Jesuits at the Qing court. The main goal of these European priests was the conversion of the Chinese to Catholicism. Their knowledge, scientific implements, and works of decorative art were also of great interest to Chinese rulers. Imperial workshops, in part manned by Jesuits, included a glass works, an armory, a clock manufacturer, precious metal and stone works, a lacquer and wood works, an enamel workshop, and a map workshop.

The decorative and functional objects on view in this exhibition provide a unique inroad for examining the results of cross-cultural encounter. Snuff—tobacco that is ground into powdered form and spiced with aromatic substances—had become popular in China by this period and elites even believed the powder had medicinal properties. Production of cunning and artful bottles to properly store and dispense snuff in China’s humid climate reached aesthetic and technological heights by the second half of the eighteenth century. The three snuff containers embellished with exotic images of Europeans, on view in the exhibition, are examples of this.

At the same time, renewed interest in glass production on the part of the Chinese court, coupled with the Jesuits’ need for optical glass for scientific instruments, led to the introduction and development of new glass manufacturing techniques. These included overlay glass and diamond-point engraving as seen in an exquisite overlaid cameo glass vase in the exhibition.

Also on view at Asia Society Museum
The following exhibitions, opening on March 5, will also be on view:

Founded in 1956, Asia Society is a nonprofit, nonpartisan, educational institution based in New York with state-of-the-art cultural centers and gallery spaces in Hong Kong and Houston, and offices throughout the United States, Europe, and Asia.

Asia Society Museum is located at 725 Park Avenue (at 70th Street), New York City. The Museum is open Tuesday through Sunday from 11:00 A.M. to 6:00 P.M. and Friday 11 A.M. to 9 P.M. (mid-September through June). Closed on Mondays and major holidays. General admission is $12, seniors $10, students $7; and free for members and persons under 16.
Find out more at AsiaSociety.org/NY and @AsiaSocietyNY.