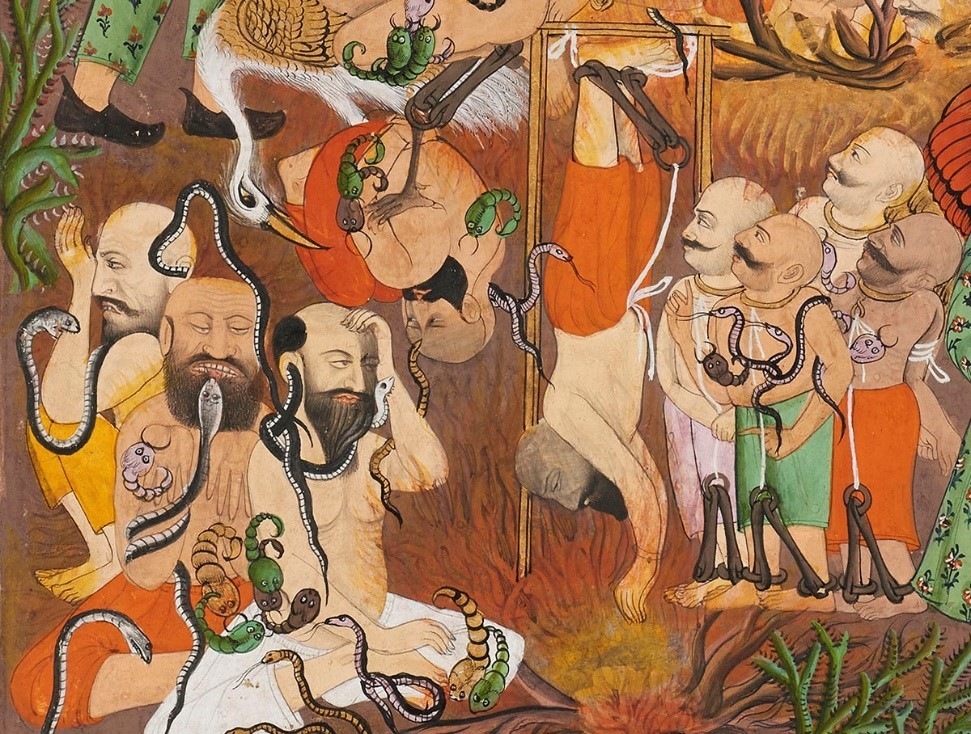 Detail, The Fathers of the People of Error Are Punished in Hell, miniature from a copy of Hamla-i Haydari (‘Ali’s Exploits), India, Deccan, Hyderabad (?), ca. 1800. Manuscript page; ink, opaque watercolor, and gold on paper. The David Collection, Copenhagen, 19/2015

Comparative Hell: Arts of Asian Underworlds examines how systems of belief and the underworlds within them are manifest in the rich artistic productions of Asia. This international loan exhibition comprises 55 exemplary artworks, spanning the eighth to twenty-first century, in a variety of mediums and formats. The exhibition will be on view at Asia Society Museum in New York February 7–May 7, 2023.

Exceptional and visually stunning artworks explore the impact of conceptions of hell on Asian visual culture over time. These works provide insight on how ideas of the underworld have influenced artistic production and how artworks in turn have been used as didactic tools, enhancing and influencing religious doctrine. Distinctive artistic practices and commonalities and differences in conceptions of the afterlife across religions and cultures are also explored.

Didactic paintings, sculptures, and sacred objects introduce the notions of Buddhist, Hindu, Jain, and Islamic cosmology, as well as concepts about judgment, punishment, and salvation after death—many of which are shared by these traditions. Exhibition artworks portray religious threats of fiery torture as a means to shape values and beliefs, to instill virtuous behavior, and to encourage atonement for sins, reflecting a universal human desire for spiritual transformation.

The exhibition is presented in five thematic sections. Situating Hell places hell in the larger religious cosmos, including paradises associated with the religious traditions represented in the exhibition. Judgment comprises images showing humans being condemned after death for their behavior during life. Graphic scenes of torture are included in Punishment in manuscript illuminations intended for teaching or display in religious edifices. In a number of religious traditions, the hope of an opportunity to escape from hell exists through the assistance of an intercessor, and Salvation is dedicated to images of such saviors and scenes of their acts of mercy. Finally, Contemporary Hell includes a small selection of works by contemporary Asian artists—Afruz Amighi, Chitra Ganesh, Luis Lorenzana, and Lu Yang—whose works present historical interpretations of hell in innovative ways to resonate with contemporary fears and tragedies.

A series of educational and public programs will provide additional context for understanding key exhibition themes, including a scholarly symposium, curatorial lectures, performances, and film screenings.

Comparative Hell: Arts of Asian Underworlds will tour to the Asian Art Museum, San Francisco, where it will be on view June 16–September 18, 2023.

Asia Society Museum is located at 725 Park Avenue (at 70th Street), New York City. For hours and admission information, visit AsiaSociety.org/NY. Connect with us on Instagram @AsiaSociety, and on Facebook and Twitter @AsiaSocietyNY.