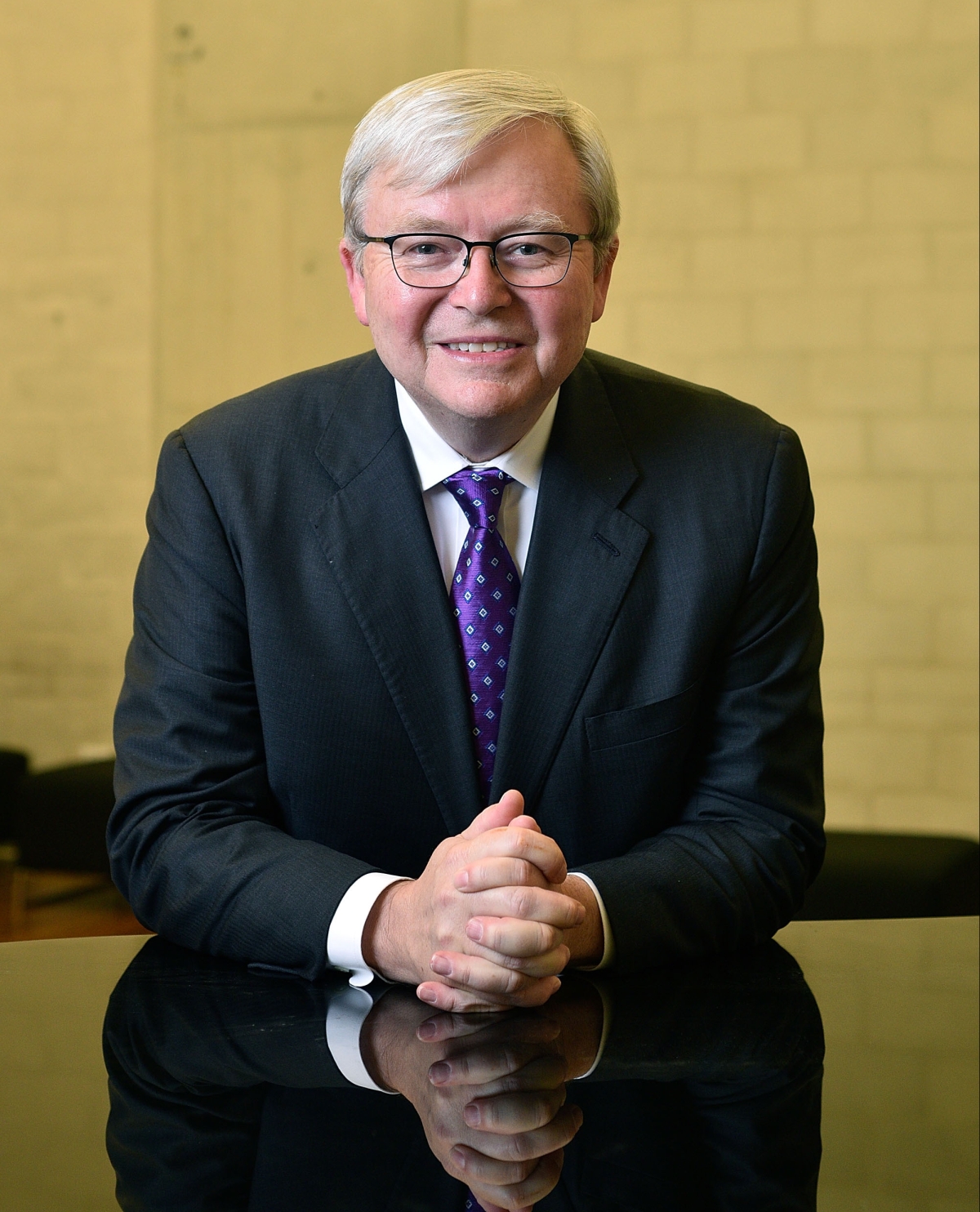 NEW YORK, October 22, 2020 — The Board of Trustees of Asia Society today announced that The Honorable Kevin Rudd, currently President of the Asia Society Policy Institute (ASPI), will serve as the institution’s eighth President and CEO. He will succeed Josette Sheeran, who had previously announced her intention to step down from her role at the end of this year. Rudd will continue in his role as President of ASPI and will assume his new position on January 1, 2021.

As ASPI’s first President, Rudd, a distinguished China scholar and leading voice on Asian affairs, has led the institute in aggressively pursuing its mission to find common ground on major policy challenges confronting the Asia Pacific in security, prosperity, sustainability, and the development of common norms and values in the region. From ASPI's beginning, Rudd has established the institute as a top global think tank in the span of four years, ranked in the top 2 percent of think tanks in the U.S. and the world, with a distinctive voice and place in the global dialogue.

Prior to joining Asia Society, Rudd served as Australia’s 26th Prime Minister (2007-2010, 2013) and as Foreign Minister (2010-2012). He is a fluent Mandarin speaker and leading international authority on China. He began his career as a China scholar, serving as an Australian diplomat in Beijing before entering Australian politics. As Prime Minister, he led Australia’s response during the Global Financial Crisis, seen by the IMF as the most effective stimulus strategy of all member states. Rudd co‑founded the G20 to drive the global response to the crisis.

Rudd succeeds Josette Sheeran who announced she is stepping down after more than seven years as President and CEO of Asia Society — during which she worked with the Board of Trustees to build the institution into the powerful, global organization it is now.

Over the course of her tenure, Sheeran led a capital campaign that secured more than $100 million to advance Asia Society’s substance, reach, and impact. She also helped launch the Asia Society Policy Institute, and the highly impactful Asia Game Changer Awards; and brought together the institution’s centers around the world into a global, connected Asia Society with a shared vision and brand. Sheeran also led Asia Society’s pivot to innovative global digital programming, outreach, and events.

“We are thrilled that Kevin has accepted the Board’s invitation to take the helm at such a critical moment for the institution. He has peerless experience and institutional knowledge, and we know that he will be an effective partner to the Board and to the global staff of Asia Society,” said John Thornton, Co-Chair, Asia Society Board of Trustees. “We are grateful to Josette for a tremendous seven years at Asia Society. She has broken new ground for us — financially, culturally, and globally — and helped position the institution to move forward with great impact.”

“Kevin is the right leader to help us deliver on our action plan. He is a true statesman and an inspirational leader — widely respected and uniquely experienced. Josette has positioned us well for the future and leaves Kevin with a strong and globally-recognized institution,” said Chan Heng Chee, Co-Chair, Asia Society Board of Trustees.

“I am honored that the Board has chosen me for this important and impactful role. Asia Society today is among the smartest, leading-edge, and distinguished institutions of its kind and I have been lucky to already have played a small part in its success. I am grateful to Josette for her many years of partnership and collaboration and I am eager to continue my work with the incredible global staff at Asia Society,” said the Honorable Kevin Rudd, incoming President and CEO of Asia Society.

“I have known and worked with Kevin for many years – he is a leader dedicated to scholarship, strategy and action to address the world’s most pressing challenges. From the front lines of war, to helping the world navigate the complexities of the US-China relationship, he has the capacity and commitment to help identify urgently needed solutions,” said Josette Sheeran, President and CEO of Asia Society. “The Board could not have made a better or more considered choice than Kevin to carry Asia Society forward. He is the thoughtful and dynamic leader we need for this moment, and I am 100% confident in his future.”

Asia Society is the leading nonpartisan, nonprofit global organization dedicated to promoting mutual understanding and strengthening partnerships among peoples, leaders, and institutions of Asia and the United States in a global context.