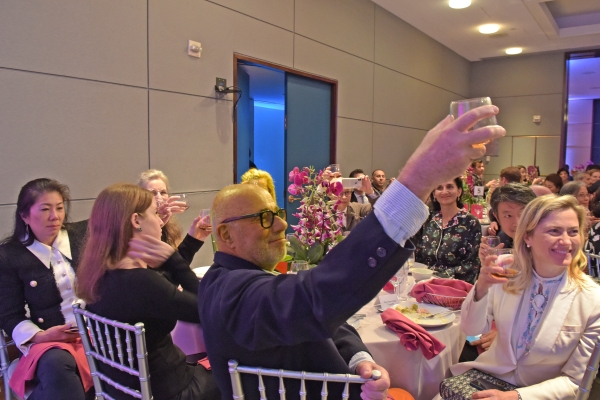 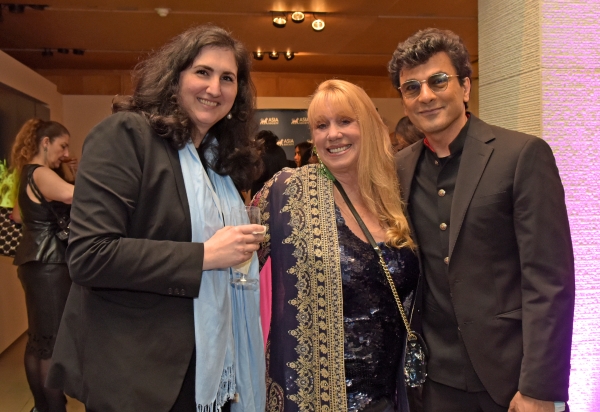 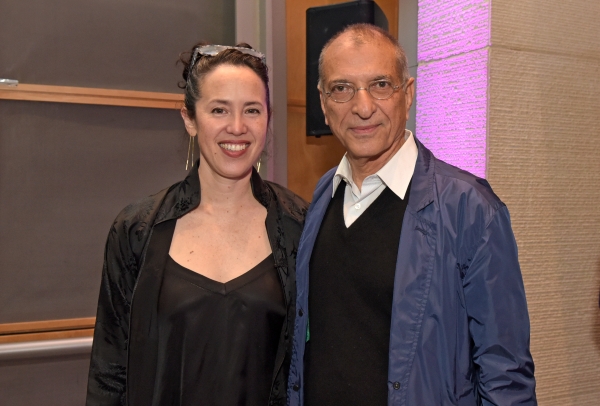 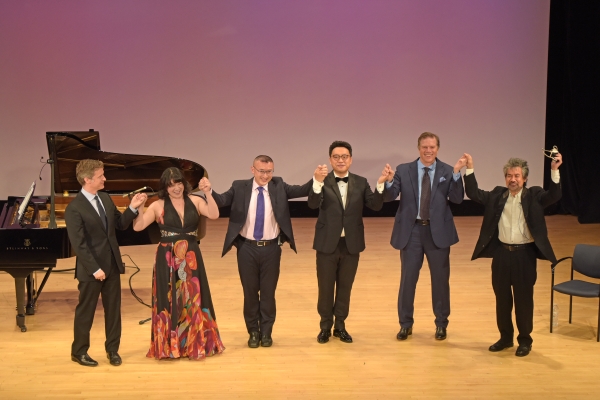 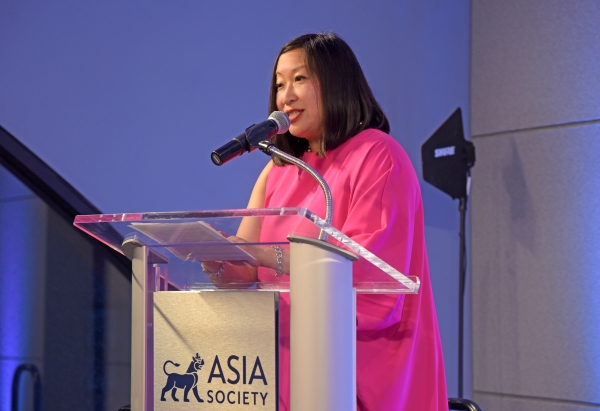 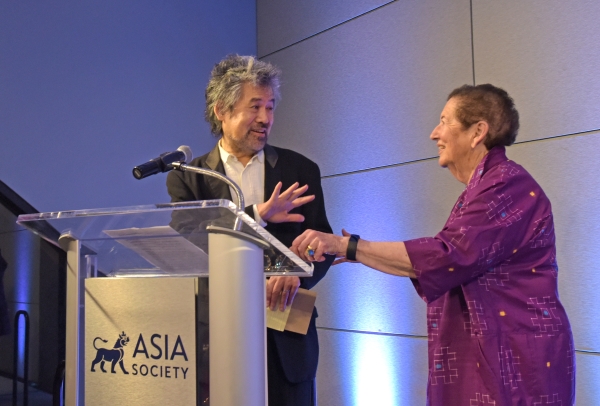 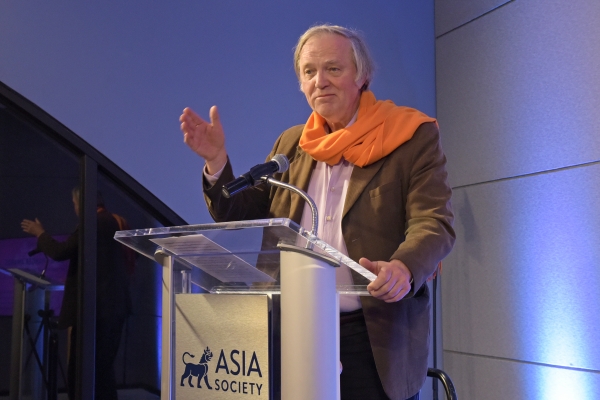 Artist, critic, and curator Robert Storr discusses the importance of diversity in the art world. 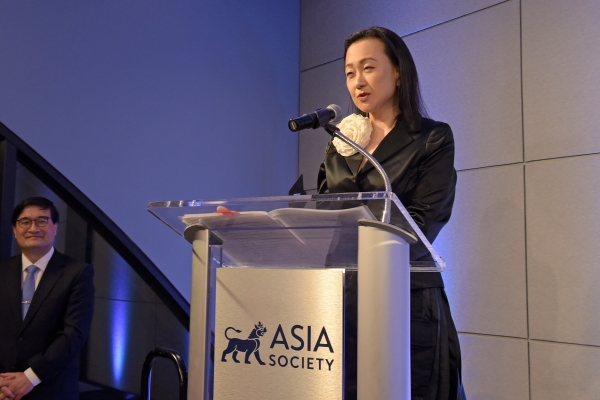 Min Jin Lee accepts the Asia Arts Game Changer Award as Ambassador Byung Hwa Chung, Consul General of Korea to the U.S., who introduced her and presented the award, looks on. 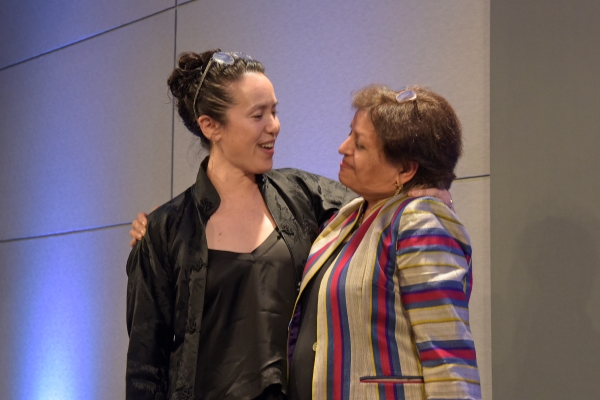 David Henry Hwang, Y.Z. Kami, Min Jin Lee, and Sarah Sze were honored for their artistic vision and achievement at the gala event, which drew artists and art enthusiasts, collectors, gallerists, and dignitaries from around the world.

Held during Asia Pacific American Heritage Month, the event was for Asia Society Museum “an opportunity to recognize and honor some of the most influential artists and art leaders from across the art world at a time when their voices have become a vital reminder of our shared humanity,” as noted by Museum Director and Vice President for Global Artistic Programs Michelle Yun Mapplethorpe in her welcoming remarks.

The evening began with a festive cocktail reception, generously sponsored by Remy Martin, in Asia Society’s Garden Court. Among those in attendance was celebrated chef Vikas Khanna, honored by Asia Society as an Asia Game Changer in 2020, who composed the dinner menu as well as elements of the reception.

Guests were then escorted to the auditorium where they were treated to a special performance of excerpts from An American Soldier (2014, 2018) and The Rift (2022), written by David Henry Hwang with music by composer Huang Ruo, who was in attendance that evening. The excerpts were performed by Rod Gilfry—appearing courtesy of the Metropolitan Opera—tenor Yi Li, and soprano Karen Vuong, with Stephen Buck on piano.

Guests then proceeded to the Asia Society’s penthouse and banquet suite for the dinner and awards ceremony. Asia Society Board of Trustees Vice Chair Betsy Z. Cohen introduced and presented the first award to David Henry Hwang. She cited his long history with the organization, recalling his first time on Asia Society’s stage with then President Robert Oxnam, in 1988. Hwang shared reflections from that event and as well as other appearances over the years. “Asia Society’s work is more important now than ever,” he said, adding: “We’ve seen [the] resurgence of anti AAPI hate, that the importance of representation and visibility is more powerful now than ever….when we are invisible, it's easier to stereotype us, to hate us, to attack us and even to kill us. And so, invisibility is death and visibility is life….I want to thank Asia Society over its history for giving us life.”

The distinguished artist, critic, and curator Robert Storr presented the award to a representative for Y.Z. Kami, praising Kami as “a remarkable painter and a remarkable man.” He cited the importance of diversity in the art world, noting “We are in a room full of people who can make the future. And we can make the future that resembles the present, as opposed to the past.”

Sharing some of her own and her family’s experiences as Korean immigrants was Min Jin Lee, who was introduced by Ambassador Byung Hwa Chung, Consul General of the Republic of Korea. The consul general praised Lee’s novels and essays as “eloquent and moving testaments to the Asian American experience, particularly the stories of Korean immigrants in the United States.” The author reflected on her experiences coming to the United States as a child in the mid-1970s, and of her family’s struggles, and of her own efforts to develop and build empathy through her craft. “Refugees are not an abstraction to me. I am the child of a refugee. And I'm here tonight, because I was graciously allowed to have sufficient peace to read and write books.” Noting the power of the artist and the art of telling stories, she added: “Through literature, we cross borders and become united with the selves that we did not know we could be, and we are reunited with the selves we have lost.”

In her introduction of Sarah Sze, Asia Society Board of Trustees Vice Chair Lulu C. Wang reflected on their common Chinese heritage. “Her story is like that of many of us, and even of myself… Her father came to America at the age of four, [from Shanghai], fleeing the revolution in China. And coincidentally, I was also four when I fled Shanghai in the wake of the revolution.” President Emeritus Vishakha N. Desai spoke of Sze’s unique talent as an artist: “It's the ideas and imagination that you embody. It's in the smallest of detail with the biggest, most capacious idea that you actually project.”

In accepting the award, Sze thanked Asia Society “for the creative space they've given me for many years,” citing her creation of a site-specific commission as part of the museum’s 2001 expansion, and during her 2011 solo exhibition, her exploration of a long-hidden window onto Park Avenue enabling an installation to extend onto the street. “But the most important space [Asia Society] gave me was beyond the realm of the physical space; they gave me the space of true freedom in which to create.”

Sze also spoke of her family’s experiences as newly arrived immigrants, recounting how her great grandmother held her four-year-old father’s hand “as they were greeted with rocks, cans, and derogative Japanese slurs. Ironically, they were mistaken for the wartime enemy that they had just fled, only to discover a different kind of enemy.” She expressed gratitude to her mother and father's generation who “worked hard to create a new kind of space for my generation. And I'm ever grateful to the huge space of permission, artistic freedom and creative encouragement that they created for me….I accept this award with the hope that my generation may create even more space for [the next].”