In Afghanistan, a Failure of Leadership | Asia Society Skip to main content

In Afghanistan, a Failure of Leadership 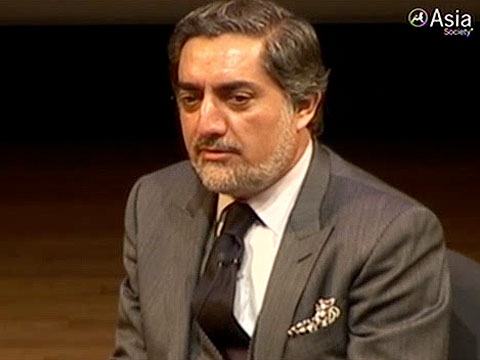 NEW YORK, May 27, 2010 - The current situation in Afghanistan is at best a "mixed" picture, Dr. Abdullah Abdullah, a 2009 Afghan presidential candidate, declared at the Asia Society's New York Center.

In a conversation here with Time magazine political columnist Joe Klein, Abdullah left no doubt that his country has reached an extremely critical moment. Despite a number of positive changes, such as improved access to education, a freer media, elections, a new parliament, and the ability of the Afghan people to exercise some rights, Afghanistan still faces many serious challenges and is in danger of jeopardizing the progress it has made over the last eight years. Foremost among those challenges, Abdullah explained, are the Taliban insurgency, the narcotics trade, and a fundamental lack of respect for the rule of law.

Furthermore, Abdullah expressed grave concerns about Hamid Karzai's leadership of Afghanistan, arguing that the current president doesn't view the situation in Afghanistan with the same sense of urgency that the US does. "He [Karzai] thinks that you [the US] will be there forever. Perhaps he also thinks that as long as you are there, he will be the president."

The losing party in an election widely perceived as stolen, Abdullah added that he had come to learn that President Karzai "doesn't believe in democracy" or in the power of ordinary citizens. Abdullah singled out the current president's tight control over the citizenry, and in particular his  suppressing their freedom of speech, for particular criticism. Karzai isn't listening to the people of Afghanistan, Abdullah cautioned, and despite the support he enjoyed in the beginning of his presidency, many Afghans now lean increasingly towards the Taliban. "Unless serious steps are taken in issues of governance and rule of law in fighting against corruption, the picture will even be more blurred."

Commenting on the role of NATO and US forces in stabilizing his country, Abdullah emphasized that the US spends the most money of any other country in Afghanistan. Nevertheless, while the Afghan people initially welcomed the international intervention, after eight to nine years they are now are confused and often regard the US as an occupying power. As Abdullah admitted, "The atmosphere of partnership and good will, which was there, has been damaged to a large extent."