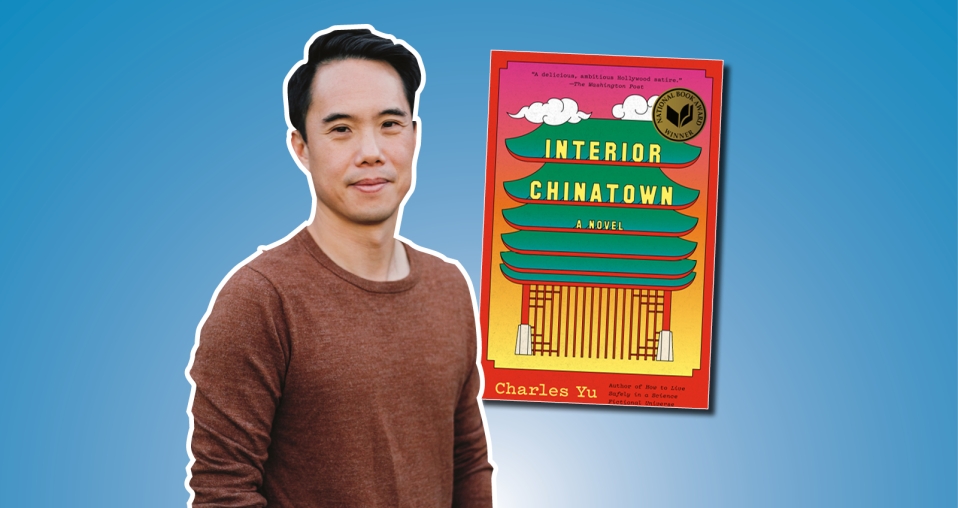 “One of the funniest books of the year. . . . A delicious, ambitious Hollywood satire.” —the Washington Post

Join us for a virtual book club led by author Charles Yu to discuss his book Interior Chinatown. A 2020 National Book Award Winner and New York Times Bestseller, the deeply personal novel is about race, pop culture, immigration, assimilation, and escaping the roles we are forced to play.

Gather with others online to reflect, discuss, and connect after diving into Interior Chinatown. We will start with an introduction from book club host Yu, followed by discussion in smaller groups of book club participants. Finally, all are invited to join in conversation and Q&A with the host. Our book club provides a welcoming virtual space for authentic and humanizing connections, including meaningful and fun conversations, and the opportunity to meet others with shared interests. Please feel free to join even if you haven’t read the entire book.

About the book
Willis Wu doesn’t perceive himself as the protagonist in his own life: he’s merely Generic Asian Man. Sometimes he gets to be Background Oriental Making a Weird Face or even Disgraced Son, but always he is relegated to a prop. Yet every day, he leaves his tiny room in a Chinatown SRO and enters the Golden Palace restaurant, where Black and White, a procedural cop show, is in perpetual production. He’s a bit player here, too, but he dreams of being Kung Fu Guy—the most respected role that anyone who looks like him can attain. Or is it?

After stumbling into the spotlight, Willis finds himself launched into a wider world than he’s ever known, discovering not only the secret history of Chinatown but the buried legacy of his own family. Infinitely inventive and deeply personal, exploring the themes of pop culture, assimilation, and immigration—Interior Chinatown is Charles Yu’s most moving, daring, and masterful novel yet.

Full description of the book and purchase options here, including e-book and audio options for immediate access. E-book copies may also be available to borrow from your local library.

This is a members-only event. Members must register to participate.

This event is co-hosted with The Asian American Writers’ Workshop (AAWW). Our book club partners include Asia Art Archive in America, Asian American Arts Alliance, Think!Chinatown, and The W.O.W Project.

About our host
Charles Yu is the author of four books, including Interior Chinatown, winner of the 2020 National Book Award. He has been nominated for two Writers Guild of America Awards for his work on the HBO series, Westworld. He has also written for shows on FX, AMC, and HBO. His fiction and nonfiction have appeared in the New Yorker, the New York Times, the Atlantic, the Wall Street Journal, and Wired, among other publications.

About our co-host
The Asian American Writers’ Workshop (AAWW) is devoted to creating, publishing, developing, and disseminating creative writing by Asian Americans, and to providing an alternative literary arts space at the intersection of migration, race, and social justice. Since our founding in 1991, we have been dedicated to the belief that Asian American stories deserve to be told. At a time when migrants, women, people of color, Muslims, and LGBTQ people are specifically targeted, we offer a new countercultural public space in which to imagine a more just future.