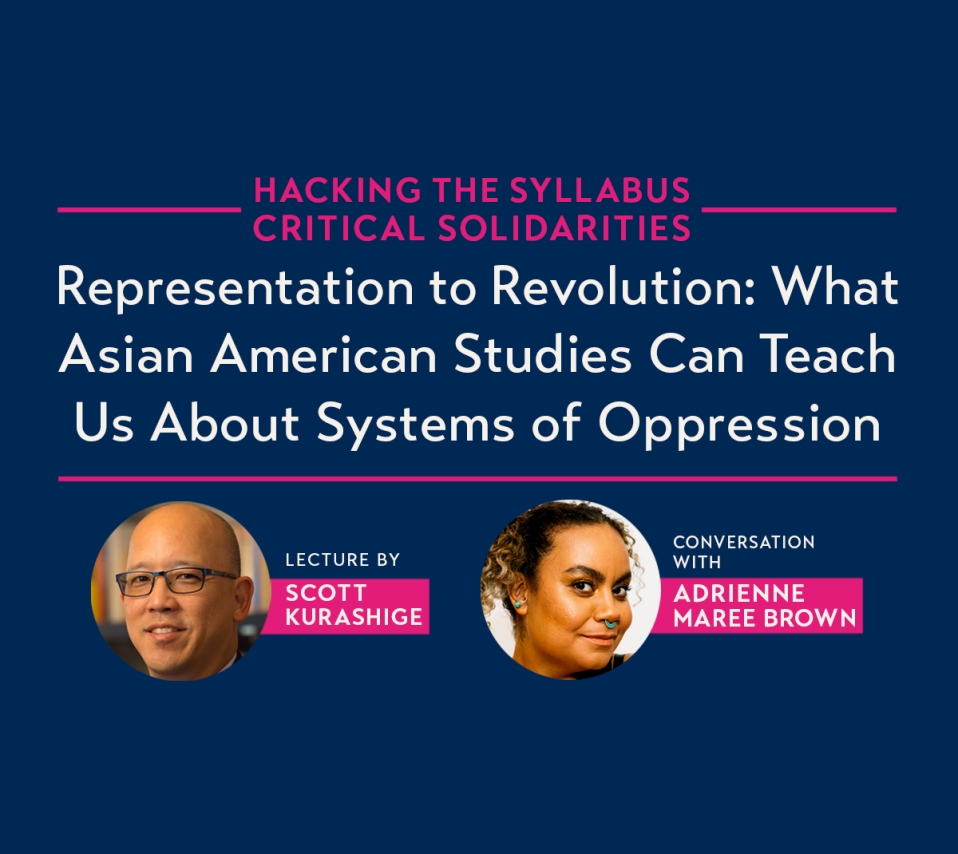 Join Dr. Scott Kurashige, professor and chair in the Department of Comparative Race and Ethnic Studies at Texas Christian University for his lecture Representation to Revolution: What Asian American Studies Can Teach Us About Systems of Oppression. Following the lecture, Dr. Kurashige will be in conversation with writer/activist/scholar adrienne maree brown.

The three-part series Hacking the Syllabus: Critical Solidarities shares powerful perspectives of educator-activists and resources they’ve created, syllabi, to equalize access to knowledge and disseminate paths for learning. The series explores building solidarities, including Asian and Black racial alliances, through an intersectional lens and covers various disciplines, including dance, feminism, and Asian American studies. Professors will illuminate a key concept from their syllabus through a brief lecture, followed by a conversation with a fellow leader in their respective field.

We invite you to explore the syllabus from Scott Kurashige’s class Racism and Anti-Racism in Asian America.

Join us on December 11 for Dr. Kurashige’s lecture Representation to Revolution: What Asian American Studies Can Teach Us About Systems of Oppression. He describes his lecture:

“Asian Americans often feel marginalized or left out of discussions about racism and social justice. During the Covid-19 pandemic, hundreds of documented attacks have served as evidence of an upsurge in hate crimes and political scapegoating against Asians. While the physical and structural violence perpetuated by these attacks must be condemned, it is insufficient to demand that Asian Americans be included on the list of racism’s victims or assume that white supremacy enacts oppression on Blacks and Asians in the same manner. My work seeks to understand the historical and structural sources of Black-Asian tensions and solidarities through case studies of multiethnic cities and community activism.

This lecture is based on my course titled “Racism and Anti-Racism in Asian America” in the Department of Comparative Race and Ethnic Studies at TCU. It centers on the question: What can Asian American Studies teach us about the interlocking systems of white supremacy, antiblackness, capitalism, and imperialism? I will argue that we need to move from concerns about whether Asian Americans are represented (in curricula, politics, or popular culture) to focus on the impact that such representation can and should have. I will particularly discuss how analyses of the “Model Minority” stereotype, which begin with critiques of Asian complicity with antiblackness, can be elevated into a broader dissection of oppressive structures and ideologies necessary to build movements for social transformation.”

The event is free and registration is required to join the Zoom webinar. The event will also be live-streamed on Asia Society's Facebook and YouTube page.

Scott Kurashige is professor and chair in the Department of Comparative Race and Ethnic Studies at Texas Christian University. He is the author or co-author of four books: The Shifting Grounds of Race: Black and Japanese Americans in the Making of Multiethnic Los Angeles (Princeton University Press, 2008); The Next American Revolution: Sustainable Activism for the Twenty-First Century with Grace Lee Boggs (University of California Press, 2012); Exiled to Motown: A History of Japanese Americans in Detroit (Detroit JACL History Project Committee, 2015); and The Fifty-Year Rebellion: How the U.S. Political Crisis Began in Detroit (University Of California Press, 2017). He served as president of the American Studies Association in 2019-20.

adrienne maree brown is the author of the NY Times Bestseller Pleasure Activism: The Politics of Feeling Good, the radical self/planet help book Emergent Strategy: Shaping Change, Changing Worlds published by AK Press in 2017. She is also the co-editor of the anthology Octavia’s Brood: Science Fiction from Social Justice Movements with Walidah Imarisha, published by AK Press in 2015. adrienne studied with generative somatics Teacher Training for a decade to deepen her healing, doula and facilitation work. She is part of the Black Organizing for Leadership and Dignity team, at the intersection of political education, community organizing, somatics and black love.