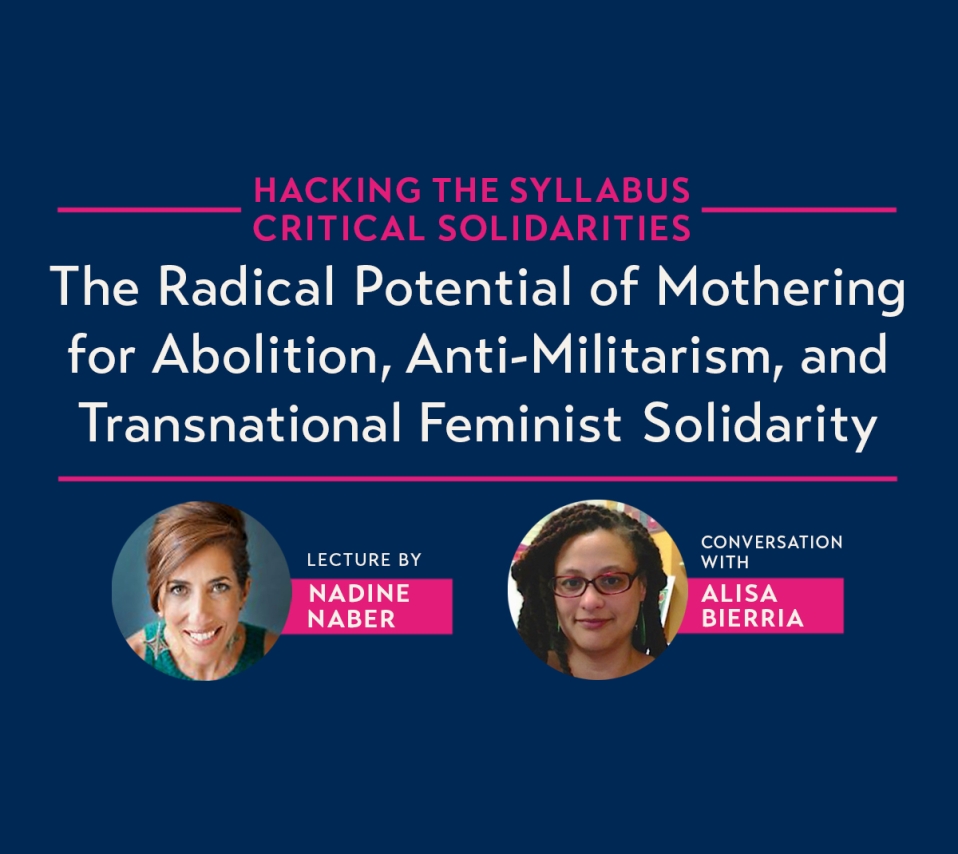 Join Dr. Nadine Naber, professor in the Gender and Women's Studies Program and the Global Asian Studies Program at the University of Illinois, Chicago, for her lecture The Radical Potential of Mothering for Abolition, Anti-Militarism, and Transnational Feminist Solidarity. Following the lecture, Dr. Naber will be in conversation with Dr. Alisa Bierria, assistant professor in the Department of Ethnic Studies at the University of California, Riverside.

The three-part series Hacking the Syllabus: Critical Solidarities shares powerful perspectives of educator-activists and resources they’ve created, syllabi, to equalize access to knowledge and disseminate paths for learning. The series explores building solidarities, including Asian and Black racial alliances, through an intersectional lens and covers various disciplines, including dance, feminism, and Asian American studies. Professors will illuminate a key concept from their syllabus through a brief lecture, followed by a conversation with a fellow leader in their respective field. We invite you to explore the syllabus from Nadine Naber’s class Feminism and Social Change.

Join us on November 18 for Dr. Naber’s lecture The Radical Potential of Mothering for Abolition, Anti-Militarism, and Transnational Feminist Solidarity. Professor Naber is the co-founder of the collective Mothers Activating Movements for Abolition and Solidarity (MAMAS), an activist research project that seeks to amplify the voices of mothers trapped within the prison-industrial complex and the violence of the war on terror while amplifying coalitions between BIPOC women, queer, and transgender people. In this lecture, she will illustrate why this collective has been insisting that people who conduct the labor of mothering should be leading the way when it comes to abolitionist and decolonizing social movements. Overall, Professor Naber argues that (1) the labor of mothering, in the context of state violence, operates as an inherently radical act and (2) care-work, especially reproductive labor, and political organizing involve a permeable, interconnected relationality necessary to the labor of creating the alternative society abolitionists have been calling for.

The event is free and registration is required to join the Zoom webinar. The event will also be live-streamed on Asia Society's Facebook and YouTube page.

Nadine Naber is an award-winning author, public speaker, and activist on the topics of racial justice, gender justice, women of color feminisms, Arab and Muslim feminisms, Arab Americans, Muslim Americans, people of color-based activism and solidarity, and international human rights. She is a professor in the Gender and Women's Studies Program and the Global Asian Studies Program at the University of Illinois, Chicago. Dr. Naber served on the national board of INCITE! (a network of feminists of color organizing to end state violence and violence in our homes and communities) and co-edited the book The Color of Violence, The INCITE! Anthology (Duke University Press, 2016).

Alisa Bierria is an assistant professor in the Department of Ethnic Studies at the University of California, Riverside. She is developing a manuscript entitled, Missing in Action: Agency, Race, & Invention, which explores how intentional action is socially imagined in contexts of antiblack racism, carceral cultures, and gendered violence. Other projects include co-editing “Community Accountability: Emerging Movements to Transform Violence,” a special issue of Social Justice, and co-founding Survived & Punished, a national organization that challenges the criminalization of survivors of domestic and sexual violence. Professor Bierria’s training as a philosopher informs her contributions to theoretical figurations of the human and human agency navigating structures of power.