Nandalal Bose was one of the leading figures of the Neo-Bengal school in India, which sought a new pictorial language in response to early twentieth-century nationalist agitation. The school developed an indigenous and national visual aesthetic, separate from the prevailing British colonial academic painting style. A student of Abanindranath Tagore, Bose was adept at synthesizing diverse art traditions, including folk art, Mogul and Pahari miniatures, Ajanta murals, and East Asian sumi-e (ink wash) paintings. He seamlessly integrated these aesthetic elements with an eclectic sensibility that was sympathetic to the rising sociopolitical concerns of his time, as well as to his pedagogic aims as an art educator, without sacrificing his personal expression. He became the principal of the Kala Bhavana (College of Arts) at Tagore’s International University Santiniketan in 1922, and among his students are some of the greatest Indian artists of the twentieth century, such as Benode Behari Mukherjee, Ramkinkar Baij, K. G. Subramanyan, A. Ramachandran, and Satyajit Ray.

Bose’s association (and the Bengal School’s connection) with East Asia is exemplified through this group of small works on paper, largely executed toward the later period of his life. The artist was exposed to sumi-e through his encounters with Tagore’s circle of Japanese artist and scholar friends. This technique utilized the tonal qualities of ink to evoke mood and sentiment, bolstering the argument that Indian art possessed a spiritual identity outside the principles of western realism. This group of ink paintings and prints points to the importance of intra-Asian aesthetic traditions, aside from European modernism, as an inspiration for Indian modern art. Moving away from realist pictorialism, Bose painted many of these images—abstracted landscapes and humble studies of daily Indian life—from memory, building up his paintings from quasi-abstract elements. Repetitive looping lines coalesce into clusters of moving clouds or water while a group of flying birds or bending tree branches indicate the movement of air through the unpainted areas of the paper. These works demonstrate the inwardly contemplative aesthetic of the artist’s late work and connection with the literati traditions of East Asian landscape painting. 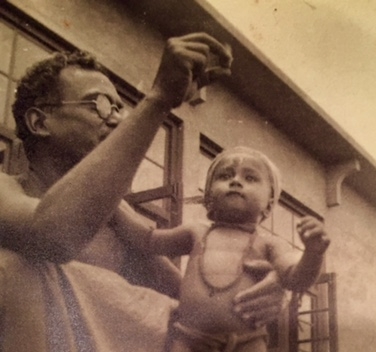