Yiyun Li and 'The Vagrants' 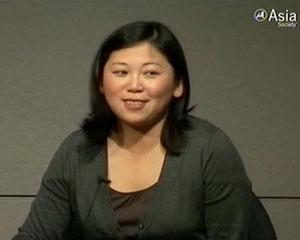 NEW YORK, February 17, 2009 – Critically acclaimed Chinese novelist Yiyun Li (A Thousand Years of Good Prayers) and editor Brigid Hughes (A Public Space) sat down at the Asia Society to discuss Li's new novel The Vagrants. Highlights of the conversation included Li's characterization techniques, how her personal experience has colored her writing, and her unlikely journey from immunologist to novelist.

Li explained that The Vagrants, which takes place in a Chinese rural village two years after the death of Mao Zedong, was inspired by the real case of a condemned woman whose kidneys were removed before, and body mutilated after, her execution. The town held a protest on her behalf, and soon after the female organizer of the protest was also executed. Li was fascinated by the difference in the deaths of these two women and wanted to explore how the community as a whole was influenced by the events. "I think from early on my interest in fiction is not the center of the action, I'm much more interested with people on the edge of society," Li explained. "I think people on the edge, in the end, contribute as much to history as people in the center."

In answering some of these questions the author created the complicated and controversial character Bashi, a young, sexually curious "good-for-nothing." Hughes explained that reviews have called Bashi a "pedophile," but Li disagrees with such a one-dimensional categorization. "It is too easy to explain his whole character as ‘pedophile.' In the end, he was a really sweet guy. What he wanted most was for people to love him, and to acknowledge that he loved people... but he also did all these horrible things. I think he broke my heart, but I had to forgive him."

The novel takes place in 1979, a time Li and her husband still vividly remember. "The Vagrants is the combined memories of me and my husband," she said. As depicted in the novel, Li herself participated in execution ceremonies as a child. "We would take a field trip from day care to the execution ceremony.... It was a very festive event; the whole community would gather together." Alluding to the strong culture of punishment in China, she added, "We grew up in a culture that taught us to be happy because bad guys got their punishment. Only later you question these things."

Li left China after college and came to the US to study immunology. "After I arrived here, I had this epiphany I should become a writer," Li explained, laughing. "I just happened to be studying at Iowa, which was very serendipitous. Someone told me everyone in Iowa City is writing a novel." She entered the writing program in Iowa and there began her writing career—in English.

"When I was a child I used to keep a journal, and of course my mother wanted to read my journal, and I knew she wanted to read my diary," explained Li. Consequently, she developed a habit of "not writing what [she] wanted to write," choosing instead to write around her subject. After she entered the army this "self-censorship" became even more pronounced. "I became this poetic writer who wrote about nature because I could not write about human beings. It was a horrible habit for a storyteller." Writing in English was liberating—"my mother doesn't read English," she joked. "I cannot write in Chinese—English is my first language in writing."