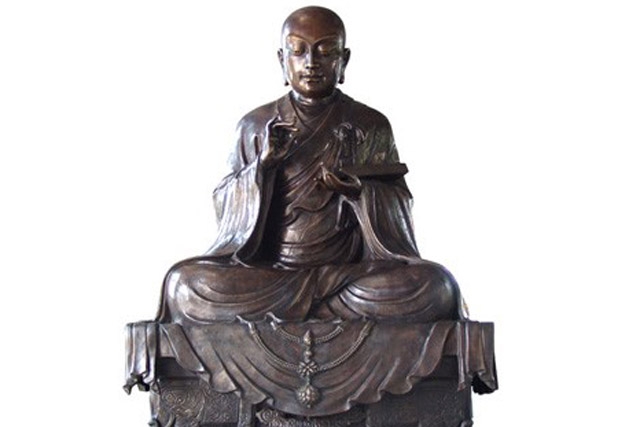 The life and adventures of a Chinese monk who made a 17-year journey to bring Buddhist teachings from India to China. Xuanzang subsequently became a main character in the great Chinese epic Journey to the West.

In 629 C.E., a Chinese Buddhist monk named Xuanzang wanted to go west to India to learn more about Buddhism, but at the time, the emperor had forbidden travel outside China. Xuanzang respected authority and he struggled with a decision on whether or not to make the journey. Xuanzang, a brilliant and devout man, in the end believed that going to India was the only way to answer questions that troubled Chinese Buddhists. He started a seventeen-year journey that year, much of it spent as a fugitive and traveling under the cover of darkness.

Xuanzang traveled along what we now know as the Silk Road. He survived the dangerous Taklamakan Desert and continued through the high and harsh mountains of Tian Shan (literally, mountains of the heavens or sky). The Silk Road took him through countries ruled by powerful leaders who sometimes wanted to keep him in their kingdom rather than allow him to travel on. His intelligence and calm devotion to Buddhism convinced these leaders to help him in this quest to reach India. He was to have many adventures as he worked his way through India, on to Nepal, the home of the Buddha, and then to Nalanda where he spent many years living with the greatest teachers and thinkers of this time. Before he returned home, Xuanzang had converted priates who meant to rob and kill him, survived deadly typhoons, and won a Great Debate in front of thousands of wise men in India.

The return trip was no less difficult and he slowly made his way back studying, teaching, and learning about the cultures of the people he met along the way. Xuanzang was still officially a fugitive in his homeland, China, because he had left without permission. Xuanzang wrote a letter to the emperor describing what he had learned and as a result, the emperor not only welcomed him back, but appointed him a court advisor.

The rest of Xuanzang's life was spent in teaching, advising and translating manuscripts that made the journey home with him. Following his journey, Buddhism became more prevalent and more widely understood in China and subsequently elsewhere in the world. The record of his pilgrimage helps us to study and understand Buddhism and the cultures along the Silk Roads.