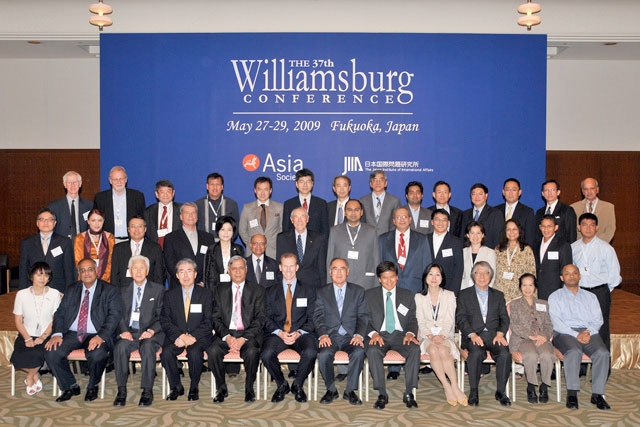 The 37th Williamsburg Conference from May 27-29, 2009 was organized in partnership with the Asia Society and the Japan Institute of International Affairs (JIIA).

Forty two distinguished top leaders representing government, business, civil society, academia and the media gathered at the JAL Resort Sea Hawk Hotel in Fukuoka.  The participants discussed the global financial crisis and its impact in Asia, climate change and its implication for security issues, the re-structuring of the Asia-Pacific regional architecture, the North Korea conundrum, and Asia’s long term needs and development goals.

The year 2009 has seen the inauguration of a new President of the United States, the continued unraveling of the global financial crisis across the world, and an apparent global leadership vacuum in the face of a convergence of crises concerning climate change, food and water security, nuclear proliferation, and state violations of human rights. At such time of tremendous flux in the Asia-Pacific region, the 37th Williamsburg Conference convened in Fukuoka, Japan from May 27-29 with 47 distinguished Asian and American leaders representing 17 countries and economies.

Under the theme, “Moving Asia-Pacific Relations Forward,” delegates spent two full days delving into the most critical challenges confronting the region, offering their perceptions and expectations of the region’s major stakeholders for fully addressing these challenges. At the same time, they presented honest assessments of current gaps in communication, regional architecture, global leadership capability, and international development to articulate what is needed to bridge these gaps and enable a consolidated Asia-Pacific Community to muster strong, coordinated responses to the world’s shared challenges.

Delegates expressed optimism about the new Obama administration and the evolution of America’s role in Asia. They lauded America’s perceptibly enhanced capacity for diplomacy with Muslim-majority countries and President Obama’s firm commitment of political and economic resources to pressing transnational problems such as nuclear proliferation, poverty, and climate change. At the same time, delegates emphasized the importance of information and risk-sharing and mutual trust between the U.S. and other major global stakeholders such as China, in order to ensure consistency and effectiveness in international responses to such problems as the nuclear threat posed by North Korea.

In the current climate of global recession and the growing domestic pressures triggered by it, delegates also cautioned against aggressive and protectionist nationalism by the world’s leading economies. They called for a sustainable and coordinated new model of development and growth that would address the deficiencies of the current global economic system, such as the gaping consumption-savings disparity among nation states and the glaring lack of financial governance and regulation. The future of international development should be one based on capacity building through trade and job creation, rather than based on foreign aid.

On a constructive note, the leveling effect of the financial crisis has somewhat allayed traditional perceptions of security threats and helped to normalize attitudes and relations between the larger Asia-Pacific nations such as the U.S., China, India, and Japan. As a result, there now exists a conducive environment for dialogue among key regional leaders on security, planning for the environment, and global climate change. Delegates agreed upon a new and expanded conception of national security that places primary significance on the relationship between sustainability and human security. Within this context, there may now be greater motivation for cooperation to mutual benefit instead of competition, given that the perception of an economic race is diminished. To capitalize on this momentum, there should be a stepping up of confidence-building measures and security dialogues between and among larger powers such as China, Japan, India, and the U.S.

In articulating a vision for the future of the Asia-Pacific community, delegates agreed that the existing regional architecture is inadequate for fulfilling the necessary responsibilities that the region’s nation states must shoulder. The region’s challenges demand concrete changes in the form of coordinated and relevant agenda-setting across all Asia-Pacific institutions, as well as securing the substantive and sustained engagement of all regional stakeholders. Many delegates from the Association of South East Asian Nations (ASEAN) emphasized, however, that the need to engage the U.S. as a major influential stakeholder in Asia and to jointly develop a common agenda for the Asia-Pacific region must be balanced with justifiable Asian aspirations for integration and community building.

Looking ahead to the next Williamsburg Conference, delegates focused on the concept of “Green Asia” and discussed how Asia’s investment in clean and green technology now can address the inter-related problems of food, water, and energy security, poverty, and climate change. As Asia continues on a trajectory of rapid economic growth, the region has tremendous capacity to have either a positive or negative impact on the environment and the future of global resources. By ensuring efficiency in the usage of energy and resources, Asia has the potential to realize the new paradigm of a low-carbon economy, while sustaining growth and enhancing the quality of development.

At the same time, Asia has the highest levels of malnutrition in the world, and malnutrition is prevalent even among countries that are food exporters. The continent is home to the greatest number of people living under the poverty line. Delegates highlighted the protection and preservation of resources, overcoming the rural-urban divide, and sustainable urban development as the region’s long-term developmental goals. They also identified several principles for the Asia-Pacific region to adhere to, which would serve as drivers of positive and constructive change for a greener Asia. These principles include maximizing human capital and participation in the market economy, reforming global supply and demand chains to establish a new model for consumption, good governance and public-private partnerships. Finally, delegates advocated the building of an intra-regional mechanism to eradicate poverty both domestically and throughout the region.

In closing the session, delegates cited continuity, influence, and the attainability of tangible results as key objectives for future conferences, and the model for next year’s Williamsburg Conference is set to be a first step in this direction.