When Asia Was the World | Asia Society Skip to main content

When Asia Was the World 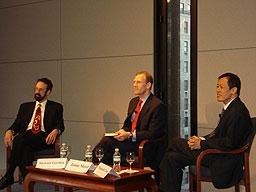 NEW YORK, April 17, 2008 - Asia Society and the South Asian Journalists Association (SAJA) hosted a panel and book-signing in honor of Stewart Gordon's When Asia Was the World (Da Capo Press, 2007). Gordon's history examines the role information networks played in making Asia the center of the world centuries ago, and how these networks continue to play an important role today, albeit through different means. The program was moderated by Asia Society Executive Vice President Jamie Metzl.

According to Gordon, Asia flourished as the wellspring of science, philosophy, and religion in the period 600-1500 AD. Linked together by a web of religious, commercial, and intellectual connections, regions from Arabia to China hummed with commerce, international diplomacy, and the brisk exchange of ideas. Religion, Gordon continued, played a central role in creating the information networks at the core of these societies, as both Buddhism and Islam encouraged connectivity.

According to Reginald Chua, assistant managing editor of the Wall Street Journal, however, the more things change, the more they stay the same. In the past, Chua argued, the force of law was weak, so people relied on networks based on trust. These networks continue to play an instrumental role in Asia today, as many business relationships are still built on trust; religious networks, Chua added, remain a powerful unifying force as well. Yet at the same time much has changed, particularly as a result of technology. With the advent of the Internet, for example, information is disseminated differently throughout societies, providing both anonymous and persistent public forums.