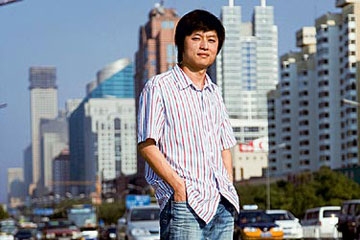 SAN FRANCISCO, October 20, 2009 - Wen Bo is Co-Director of Pacific Environment’s China Program and Coordinator of the Greengrants China Advisory Board. He has supported more than 40 environmental grassroots groups in China through small grants, exchange programs, workshops and presentations, and organized the first student environmental conference in China in 1995. He is a founder of the China Green Student Forum, which is now a network of more than 100 student environmental groups. Wen was an Asia 21 Fellow of the Asia Society, received a 2009 Pew Fellowship in Marine Conservation, and was named a 2009 Young Global Leader by the World Economic Forum. In 2006, TIME magazine named him an “Eco Hero.”

Wen Bo was at the Asia Society Northern California to participate in a panel discussion on “The State of Environmental Activism in China” on October 20, 2009. In this exclusive interview with Asia Society Northern California's Neha Sakhuja, he discusses China's rise in environmental activism and the challenges and opportunities that lie ahead for NGOs.

NS: Who are China’s environmental NGOs and activists and what are their biggest concerns? How do they compare with the US environmental movement?

WB: Before 1990 China did not have any environmental non-governmental organization in an organized form. After the 1990s ,with opening of the economy and its environmental setbacks, intellectuals started organizing themselves as clubs. They began to look at the Western environmental groups and slowly hundreds of groups emerged. The grassroots movement in China is supported by a number of citizens who are taking small but equally important steps. While many Chinese NGOs are based in Beijing, they also work throughout the country to address local concerns.

In addition, the active participation of college students in the ecological involvement has been vital. There are a large number of campus environmental groups in China which are working on raising awareness about some of the glaring environmental issues facing the country. Many of the students who have graduated are working with environmental organizations. The new generation of young people are using the internet to build websites, blogs and language skills to get their voices heard.

Today, most of the NGOs concerns revolve around important issues like raising awareness about climate change, endangered species, and interest in protecting wildlife. We also know these areas have been neglected by both organizations and government such as marine pollution, marine issues, etc. We identify issues that are critical and have not been addressed. Though a majority of other problems do not get tackled due to limited resources like staff, funding, and permits. We are interested in tackling more detailed complexities of climate change and desertification.

One cannot really compare. US has many environmental groups. In a dynamic city like Beijing there are only 50 NGOs and in many cities not too many.

NS: How are they regarded by the public? What have been their biggest achievements, and have these translated into growing popular support?

WB: I think people in China are very supportive of the NGOs as well as they are more aware of the work groups are doing. Many of the groups are making positive contributions on environmental issues which are being well perceived by the government. Normally the government does not interfere but it continues to be suspicious of NGOs funded by foreign donors. The government expects a detailed report on the activities of the NGO supported by Western interests.

Many organizations, they are not membership-based, are able to have a large number of volunteers. So, a lot of people check the web site, write to these groups, and some simply to report to these organizations of a local environment problem. They now turn to the environmental organizations to find solutions, to find the opportunities for them to get involved. And also actively participate in some of the efforts.

NS: NGOs in China, particularly unregistered, grassroots organization are typically very small, volunteer-based, and have limited funding. You allocate grants to grassroots environmental organizations in China, through a charity called Global Greengrants Fund. How are they surviving and working to become more sustainable?

WB: Funding is a big challenge for most NGOs and they do struggle. Most of the NGOs want to contribute their time and effort to an environmental cause, but they cannot do so without the proper infrastructure.

Of course, it’s the not the only resource one needs; the groups also need training on institutional building, leadership skills, and structure of governance. This helps put in place a system of checks and balances which hold them accountable and responsible. This should encourage them to be more focused and be taken seriously by the government.

NS: China is sometimes said to lack a culture of philanthropic giving.  How true is this today, and what has it meant for NGO fundraising?

WB: Chinese people are interested in supporting these charitable efforts, but they lack the proper channels, so they don't know where to donate their funding. So often these types of resources are mostly channeled into government-organized NGOs.

Next: "The NGO community needs to realize that you cannot treat the government as an enemy."

NS: Most environmental NGOs in China are focused on local issues like water/air pollution and health issues. What are the challenges in working on a broader, regional or national level and linking to broader international issues like climate change?

There is a disconnect between international environmental issues and local environmental issues largely because of lack of information for Chinese NGOs. For example: for Chinese NGOs to understand the impact of climate change on the Arctic and Antarctic is abstract. They do not see this happening in person – if they saw it on television, read the newspaper they view it as something that is not immediately affecting their lives and something they cannot do much about.

But there are numerous local issues, I feel, that are their responsibility. Groups working on water pollution see the critical impact it has on daily lives of people living along the river. This motivates them to tackle issues which immediately affect them and can get support locally. They understand global issues but don’t see themselves engaged with them. If they begin to work on something which is viewed as abstract – people tend to argue about the need to tackle immediate and relevant local problems.

NS: How are NGOs juggling the often-conflicting tasks of both policing and partnering with government and business, as well as educating the public?

WB: I think ... we have come a long way [in] 10 years and you would be aware that the government has never been completely supportive of grass-roots and non-governmental efforts. But, many organizations are able to win the sympathy and support from many government officials in both central government and local government. The very existence of these environmental organizations alone proves that they have managed to survive and accumulate the manpower and the resources for them to perform better, and they have also been able to recruit a large number of volunteers.

I think the NGO community needs to realize that you cannot treat the government as an enemy. One needs to convince the government to make the right decisions through diplomatic tactics. It is important to hold the policy makers accountable and work with them at the same time. Have respect for individual government officials.

Communication skills are a must for NGOs to present issues to government and keep improving their performance, knowledge, and expertise.

NS: What role does the government play in regulating, and sometimes suppressing, these organizations? Is the recent government crackdown on foreign-funded NGOs like the Open Constitution Initiative the start of a longer-term trend, or is it part of the ebb and flow of government-NGO relations?  How has the regulatory environment in China changed during your careers, and how have you responded?

WB: The Open Constitution Initiative works on human rights issues, which is a delicate issue in China. If you do not present yourselves well and touch the nerve of the government, the government can retaliate. I think it’s not very common and is a unique case. The government has not done much policing of NGOs unless they work on sensitive issues of human rights. Most of the NGOs work on soft and moderate issues, though there are NGOs which work on controversial issues – but they again take a moderate approach. Otherwise you jeopardize your long-term effectiveness.

Registration of NGOs has always been a sore point. It’s not easy to get registered without a government agency sponsoring you. I don’t think many NGOs register because it serves as a barrier with the government always watching you. Of course, if they can get a legal status, funding opportunities become easier. But they should not sacrifice their independence for the legitimacy within the Chinese system, because the system itself is not designed to support independent groups.

NS: What practical issues should international donors be aware of while funding in China? How are international NGOs helping their Chinese counterparts? What do Chinese NGOs have to teach to those in the West?

WB: International donors should be more culturally sensitive. They should understand that they have to consider local social reality in China and trust local voices.

It is important that international donors interact with local NGOs and support them with funding. There is a need for the environmental groups working in China to have a global voice and be represented at international forums.

I think NGOs in China demonstrate the dedication of working in very difficult situations. They struggle with resources to deal with such dramatic environmental problems. China is facing many environmental challenges, but the society itself is not really conducive to support the civil society development in China.

Next: "I am very optimistic about the future of the environmental movement in China."

WB: The government in China is supportive of the concept of sustainable development. But they still have a blurry picture about what real measures need to be taken. The government has to realize that economic development is not always the goal of humanity. Human development and environmental consideration is an important component of growth and the government should not ignore it in its obsession for growth. Absolute focus on growth affects the livelihood of people and communities in rural and creates more imbalance rather than development.

The people are aware that they want the kind of development that is both good for themselves, for the community, for the country as well as for the rest of the world. People in China are sometimes more visionary than the government.

NS: TIME magazine featured you as the 2006 "Eco-Hero." How have you used this recognition to get more support for the environmental cause?  What are your predictions for the future?

WB: It is good publicity not for me but for the cause and it also demonstrates that there are people in China – many people like me who care about the environment and are engaged in the environmental movement

I think we will continue to face political obstacles, but over the years, I would say there will be more dedicated and talented young people who start to engage in the environmental movement. I would say that there will be grassroots organizations in many provinces in China and they are able to get a lot of support from both the public and international community.

There will be more and more people, even from the government, who will start to support this effort, because when they learn more about these environmental organizations, they will know that they are bright, talented, and visionary people behind this. So, I think that I am very optimistic about the future of the environmental movement in China.