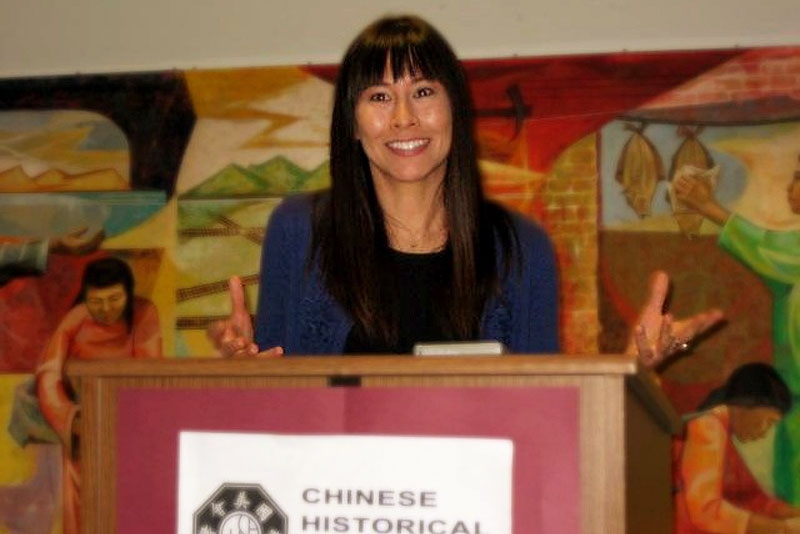 Ryan began by showing the parallels between her own family history and the characters in the novel, revealing that in both cases the political situation changed lives in dramatic and surprising ways.

While doing the research for her novel, Ryan uncovered the history of her grandmother's wedding, a lavish affair paid for by her great-grandfather. Ostensibly an act of generosity, it was also motivated, Ryan found, by a sense of immense guilt. As she described, her great-grandfather had been in San Francisco during the Sino-Japanese War in the 1930s while her great-grandmother's family fled to Fujian. Assuming his family had perished, her great-grandfather remarried and went on with his life for the next decade. But a chance encounter with an old acquaintance revealed that his wife and children had survived the war. A reunion with his estranged family spurred the spending spree for his daughter's wedding.

Ryan used this as an example of how outside political forces had a tremendous impact on individual lives. And this was no less true for early Chinese immigrants to the US. "As free as America liked to see itself, and as loudly as it called to the world to give over ‘your tired, your poor, your huddled masses yearning to breathe free,'" Ryan observed, "in truth America had a very defined view of what the American population should look like. And they had a very confused idea of how to achieve that."

A string of xenophobic laws against Chinese immigrants to the US in the 19th and early 20th centuries created a population of many Chinese men but few women. This prevented Chinese immigrants from having children entitled to citizenship by birth, ensuring their status as guest workers (American women who married foreigners also lost their US citizenship). Because these Chinese laborers had no children to support or wives to come home to, employers could keep their working hours longer and wages lower.

The ban on Chinese women also turned prostitution into a huge underground racket. Chinese women, now immensely profitable as sex workers, were often tricked or sold into servitude in the US. To circumvent strict immigration policies against Chinese women, they passed through customs by memorizing fake biographies, impersonating wives or daughters of legitimate merchants, or even being hidden in crates. Once landed, the women were brought to brothels (often little more than hovels) throughout San Francisco and the Bay Area, where they worked until they had paid off their debt or, more frequently, died.

Next: History, fiction, and ghosts

All of this history came into play in the Californian town of Locke, about 40 minutes south of Sacramento and the setting for Water Ghosts. In the 1920s, Locke was primarily a town of Chinese bachelors, and notorious for its brothels staffed exclusively by white prostitutes. Here, history and fiction combine. As Ryan stated, "The theme is the same. It's the separation of Chinese men who came to America, and the women they left behind in China."

At the center of Water Ghosts is gambling hall manager Richard Fong. "The story of Richard Fong and the story of Locke," Ryan explained, "are webbed into this matrix of the sometimes contradictory immigration laws of America." Prevented by immigration laws from seeing his wife Ming Wai for 10 years, he soothes his loneliness at the brothel run by Poppy See, a Chinese prostitute-turned-madam. There, he develops a relationship with young white prostitute Chloe—until his wife mysteriously appears aboard a boat with two other Chinese women.

Ryan concluded her remarks with a discussion of ghosts, which also figure prominently in her novel. While ghosts in the novel took on a rather literal meaning, Ryan sees many figurative ghosts of Locke still haunting us to this day, "ghosts of the legacy of those years": Locke's historic buildings housing immigrant workers, now Latino instead of Chinese; Arizona's HB1070 law requiring proof of citizenship; the fact that Asian women are still being tricked into prostitution. Ryan states that America needs to take an honest look at its past—the good and the bad#8212;to inform its present and shape its future.

This program was co-sponsored by the Chinese Historical Society of America.