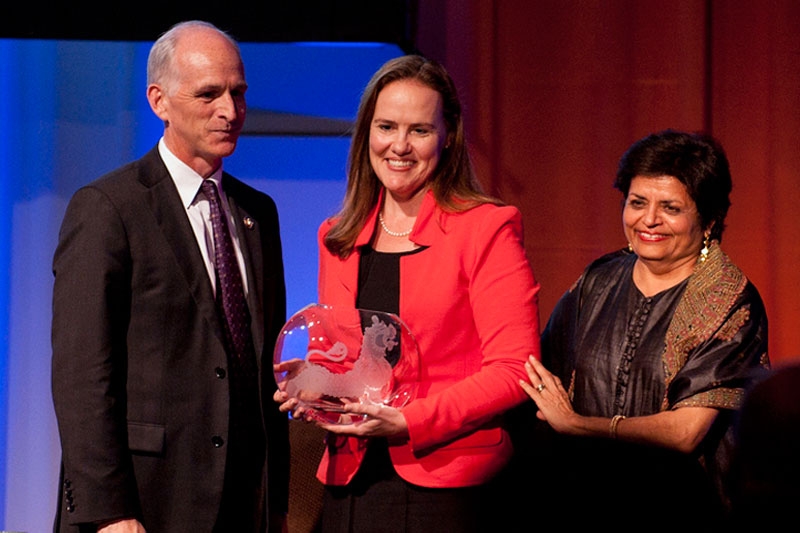 "Asia Society is transforming its presence in Washington because we believe we can do more here to build cooperation between the United States and Asia," said Asia Society President Vishakha Desai. "To be a global organization with global impact, we must work with our colleagues in China and India, and across Asia and the United States, to develop new ideas for cooperation among Asia-Pacific nations. And we must be a public voice making the public case for these ideas in Washington, Beijing, Delhi and beyond. We will be working in the coming months and years to build a critical mass of Washington activists and thinkers who understand that, in the 21st century, American peace and prosperity is inextricably tied to developments in Asia, and who are committed to building bridges between the United States and Asia."

Each of the speakers offered their perspective on progress toward greater cooperation between the United States and Asia. In her remarks, Flournoy recognized President Obama's decision to focus U.S. national security strategy on Asia. President Obama, she said "was asking us all the questions — 'Where should our focus be? Where do future challenges lie? Where would the future opportunities lie?'"

Flournoy continued: "It was clear from the internal discussion, and from his own internal inclinations, that the answer was first and foremost in the Asia-Pacific. It is the most important region in our future security as Americans and for our economic prosperity as Americans … I think the President also understood the history of the United States' role in the region, and how critical our role as a foundation helping to provide a bedrock, a foundation of political stability has been to the rise of the region, to the economic development of the region, and to the emergence of so many strong democracies."

Flournoy closed with a call to action. "I think it is incumbent upon all of us in this room and those in this town to ensure that we can actually move through the current challenges and realize the full potential of a deepened American partnership with the Asia-Pacific," she said.

Flournoy's remarks echoed a common theme across the evening. As Asia Society Global Co-Chair Henrietta H. Fore said in her welcome address, "In America's Pacific century, with diplomatic, trade, cultural and defense cooperation growing and deepening between the United States and Asia, we believe there is a critical need on both sides of the Pacific to constantly work to find new modes of cooperation and to build on our successive accomplishments."

In a conversation with author and Washington Post journalist David Ignatius, John Negroponte noted that such American efforts to understand Asia and build cooperation required a broad historical perspective. "If we walk around with the notion in our minds that this is a zero-sum game that we're engaged in with China, I think that this is the wrong approach, and runs a very high risk of becoming self-fulfilling," he said. "The countries of the Asia-Pacific region want us to play a balancing role … and we can continue to be a force for good. We can be helpful to overall peace and security in the region."

Frank Wisner and Tom Pickering described the challenges in U.S.-Asia policy, focusing on Iran. Both urged continued negotiation. "What's at stake," said Wisner, included "stability of the region, core sets of American interests, the way Iran — a historic great power in its region — works out its destiny, and we with it." "The tricky question," Pickering noted, "is how to move and when to move. The difficulty is … very different aspirations."