'Voicing a Presence,' and Talking About Art and Feminism | Asia Society Skip to main content

'Voicing a Presence,' and Talking About Art and Feminism 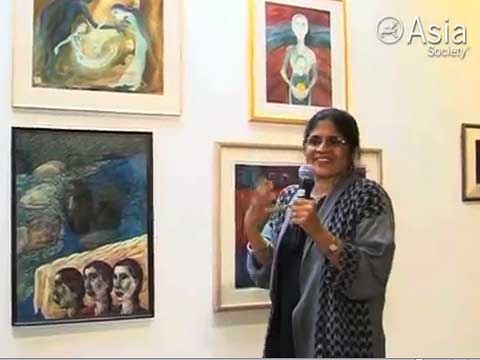 Gallery curator Kamini Sawhney, who selected the works on display, introduced the programme, followed by a discussion and selected tour of the exhibition with artists Bharati Kapadia and Shakuntala Kulkarni that was led by sociologist Gita Chadha.

Organized by by Asia Society India Centre and the Gallery, the programme was a part of Asia Society's AsiaLens series, which brings together voices from across Asia as they express themselves though the visual and performing arts, presenting a vibrant and nuanced view of modern Asia.

Kamini Sawhney's opening remarks touched on how the audience might explore feminism as a "subject and style not unique to gender, but perhaps a different perspective from whatever yours may be." She made the distinction that while a woman artist's personal experiences may shape the perspective of her work, that work should not be defined exclusively according to gender.

Dr. Gita Chadha spoke about the ways feminism related to the experiential lives of the women artists — "Feminism is not just activism or bra burning and going out on the streets and fighting for justice… it's an apparatus which is deeply embedded in the experiential realities of the woman's body and experiences, all relating to her human identity.” This feminist identity, she claimed, is a fundamental basis of reality, and should be looked at "not as a curse word, but in more empathetic and open-ended ways."

Bharati Kapadia, one of the featured artists, distinguished herself as an artist who is not a feminist artist, per se, adding her own take on how her experience as a woman had shaped her work. "I'm working because of my sensitivities as a woman," she said, specifying that she is most interested in the kind of resonance which is "embedded from the outside world and the response and echo it has created in me."

Shakuntala Kulkarni, another featured artist, talked about how her work reflects the confinements of the domestic space for women. She described how the label of feminism could be useful for understanding certain aspects of the human condition, but that she didn't define herself exclusively according to its concerns.