What do Chinese People make of Trump, Hillary, and the American Democratic Process? | Asia Society Skip to main content

What do Chinese People make of Trump, Hillary, and the American Democratic Process? 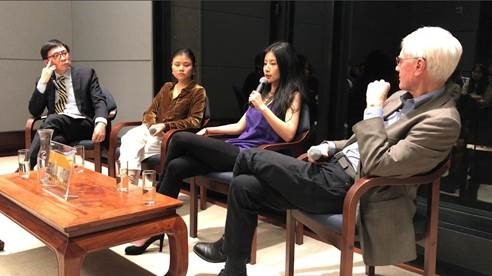 November’s U.S. election was “definitely like watching a reality TV show,” is how Beijing-based artist Li Shurui described it. Speaking at an Asia Society event on December 6, 2016, Li, a noted Chinese female artist, traced her interest in the American electoral process back to the re-election of George W. Bush in 2004. “That was unexpected,” she said.

Li joined Fan Jiayang, a staff writer for the New Yorker magazine, for a Mandarin-language discussion about what Chinese people made of the spectacle that is the American presidential election.

As both speakers reflected on what the U.S. elections mean to them, Fan shared that as an individual voter she did not feel she has any significant impact on the political process. “My thinking is that I am only a single person, maybe that’s a very Chinese way of thinking,” said Fan, who is Chinese-American. Similarly, Li felt that the possibility for real change brought about by new American leadership was often overblown. “Even though Obama has been in office for eight years, we still hear news everyday about black people being shot,” said Li.

Despite feeling a sense of distance from the American political process, Fan and Li said that this U.S. election managed to capture their attention like no presidential race before, in part, Fan pointed out, because both candidates are well known in China.

Chinese people have held a grudge towards Hillary Clinton since the mid-90s, when the then-first lady condemned China’s human rights record by proclaiming that “women’s rights are human rights” in a speech delivered at a U.N. Conference for Women in Beijing. The Chinese government, embarrassed, censored the speech. Beijing’s suspicions of Clinton deepened when she continued to be critical of China as a U.S. senator and then secretary of state.

Fan learned more about Hillary Clinton when the Monica Lewinsky scandal broke in 1998. Only a few years after her family immigrated to the United States, Fan, then a young girl, had a tainted view of the first lady: “At that time I did not think so highly of Hillary.” However, over the years, she became a strong supporter of Hillary, a sentiment that grew stronger as Donald Trump managed to gain support and ultimately win the election.

Fan said that a double-standard, especially pronounced in conservative Chinese society, that penalizes women vying for positions of political power, years of distrust of Clinton, and Trump’s perceived business success compelled many Chinese to express support for the Manhattan real estate mogul. “Trump is a well-known brand in China,” said Fan, “There are all kinds of products with Trump’s name on them.” Indeed, if Mainland Chinese had the right to vote in the U.S. election, “I feel like there is a real possibility that they would have chosen Trump,” said Fan. “I think, in China, there is a certain degree of misunderstanding about Trump’s real abilities.”

Fan also noted the striking division in American society the election has brought to the surface, especially between well-educated urbanites and blue-collar workers from the interior. “We have this problem in China too," said panel moderator Bin Ouyang, Associate Director for the Center on U.S.-China Relations. “For example, people who live in the city, who live in Beijing, would not be able to understand the plight of farmers in Henan Province, their needs and their views on society.”

Chinese society as a whole, too, was divided in the way it saw the two candidates. While many Chinese supported Trump, government elites, despite unease about her tough-on-China track record, reluctantly favored Clinton, seeing her as the more predictable candidate. “Trump is still an unknown,” Fan said. “That is dangerous for the Chinese government.”

However, Ouyang pointed out, what does seem clear is that the United States is moving toward greater isolation, rejection of cosmopolitanism and international trade, and a less welcoming attitude towards immigrants. “I am beginning to think that Germany had Hitler, the Soviet Union had Stalin, China had Mao, and now we have Trump in America,” said Orville Schell, Arthur Ross Director of the Center on U.S.-China Relations, who also joined the panel. “We never thought that we would encounter such problems in the United States.” To that, Ouyang added, “Hitler also came to power by being democratically elected. So, democratic institutions do not necessarily pose an obstacle for people like them.” Looking into the future, Ouyang wondered, “How will Americans respond to this? How does the system respond to a president like this?”