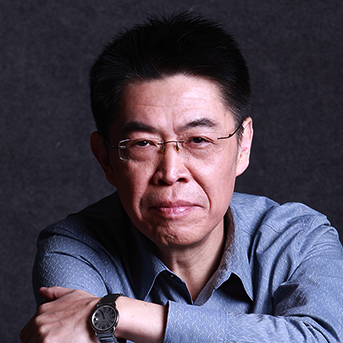 Zhang Zhao has had a long career in China-U.S. co-production and has founded two of China’s biggest private-sector studios. In 2012, The Hollywood Reporter called him the flagbearer for the “renaissance” of China’s film industry. Zhang graduated from Shanghai’s Fudan University with Bachelor of Science and Master of Philosophy degrees. In the early ‘90s, he earned a Master of Fine Arts in film production in the U.S. Zhang returned to China in 1996 and joined the Shanghai Film Group, where he worked on China-U.S. co-productions, including the film Spacenapped and TV series Love Visa. In 2000, he joined the State Council Information Office, where he was oversaw co-productions with over a dozen U.S. television stations and a documentary on contemporary China.

In 2003, Zhang was appointed Artistic Director of Enlight Media, China’s largest private entertainment group. He founded Enlight Pictures in 2006 and served as president. By 2010, Enlight Pictures had produced and distributed over 20 films and doubled its annual growth for four straight years. In 2011, the studio merged with Enlight Media, which became a publicly traded company in China. That year, Zhang left to set up Le Vision Pictures, becoming CEO and executive director. He inspired the industry term “Le Vision speed” because the studio produced six films in 2012, including The Bullet Vanishes, which received many award nominations in Asia. Le Vision participated in the production and handled the distribution of The Expendables 2, whose $54 million box office in China accounted for nearly 20% of the film’s global receipts. Le Vision produced 13 films in 2013, including record-setting hits Tiny Times and Tiny Times 2. Among the 16 films produced or distributed in 2014 were renowned Chinese filmmaker Zhang Yimou’s Coming Home and Hollywood productions, The Expendables 3 and Automata. Le Vision also appointed Zhang Yimou as its Signed Director and Artistic Director. In 2013, Zhang announced Le Vision’s five-year strategy for U.S.-China partnerships and marketing efforts. The O2O (Online to Offline) mobile film marketing and distribution platform positions Le Vision perfectly for the Internet era and is helping modernize the Chinese film industry. Le Vision’s U.S. strategy includes the establishment of a Hollywood office and joint U.S.-China institute for research on intellectual property rights; U.S.-China film coproductions; film-market services for the six major Hollywood studios, and the development of U.S.-China cooperation in film derivative sales. Zhang’s goal is to become the leader in film-industry collaboration between the two countries.