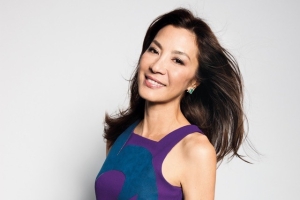 Michelle Yeoh is one of the most successful and versatile Chinese actresses, acclaimed for her work on both sides of the Pacific. From the opening scene of this year’s hit Crazy Rich Asians, her portrayal of steely Eleanor Young was a tour de force that won over film critics and fans alike. Yeoh currently stars in Star Trek: Discovery on CBS. Born in Malaysia, she moved to London as a teenager to study ballet at the Royal Academy of Dance. As an actress, she has drawn on her dance skills, rather than formal martial-arts training, to perform action scenes from her early Hong Kong films with Jackie Chan through Ang Lee’s Crouching Tiger, Hidden Dragon. That film, as a recent interviewer wrote in GQ, enabled Yeoh to put her considerable gifts, “a one-two punch of emotional gravity and physical virtuosity, on full display.” Yeoh’s Hollywood break came as Bond girl Wai Lin opposite Pierce Brosnan in Tomorrow Never Dies, and she starred as Burmese Nobel Peace Prize winner and pro-democracy leader Aung San Suu Kyi in Luc Besson’s critically acclaimed The Lady. Yeoh is a member of the Academy of Motion Picture Arts and Sciences. Other credits in her distinguished career include Rob Marshall’s Memoirs of a Geisha, DreamWorks Animation’s Kung Fu Panda 2 and Danny Boyle’s Sunshine.