Uncle Apichatpong Who Ruminates on the Past, Present and Future | Asia Society Skip to main content

Uncle Apichatpong Who Ruminates on the Past, Present and Future 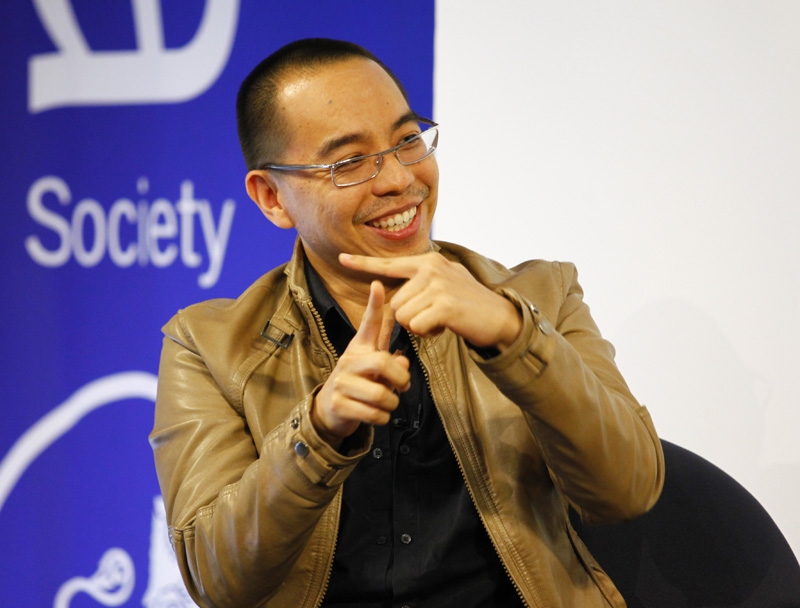 NEW YORK, May 22, 2011 – During the Q&A following the screening of Uncle Boonmee Who Can Recall His Past Lives (2010), part of Asia Society New York's Blissfully Thai film series (May 13 – June 17, 2011), filmmaker Apichatpong Weerasethakul spoke on a wide range of topics, from the making of Uncle Boonmee, the inspiration behind it, the subjects of death, reincarnation, memories, Thai politics, to, curiously, an avocado farming life after filmmaking, in a conversation with series curator La Frances Hui and a live audience.

The feature film Uncle Boonmee Who Can Recall His Past Lives, which won Cannes Film Festival's Palme d’Or in 2010, is part of a larger art project, Primitive, which surveys the memories of northeastern Thailand. It also includes an installation of video pieces and a book. Uncle Boonmee follows the final days of a man's life, when he is visited by his loved ones, including his deceased wife appearing as a ghost and his long-lost son who has taken on the form of a monkey ghost.

A book named A Man Who Recall Past Lives (1983) — written by Buddhist monk Phra Sripariyattiweti, from a monastery frequented by the filmmaker's father — inspired the making of the feature film. But while the story of Uncle Boonmee, a real person who could recall his past lives and passed away more than 20 years ago, fascinated the filmmaker, his film is not an adaptation of the book. Rather, the director took the inspiration and mixed it with his own memories; thus the film is as much about Uncle Apichatpong as it is about Uncle Boonmee, explained the filmmaker.

Nabua, a village at the core of the Primitive project, has a troubling history. Due to the proximity to Laos, it was Communism's entry point into Thailand. The military set up camp in the region in the '60s and embarked on a brutal crackdown on Communism. Many people were killed, and an unknown number disappeared into the jungle. A sense of fear permeated the region. Fast forward to contemporary time, and a country divided by political factionism and violence.

Apichatpong recalled one morning about five years ago, when he was awakened to a sense of Thailand's lack of freedom: "There are a lot of things we cannot say or do. And I started, like many people during that time, to educate ourselves… and realized the evil cycle that goes on. There's a sense of hopelessness living in Thailand," said Apichatpong. That realization sparked the filmmaker's interest in death and reincarnation.

A filmmaker who has shown keen interest in the past, Apichatpong has made several films drawing on personal, cultural, and political histories. In response to Hui's question about his gentle and peaceful treatment of memories, even tormenting ones, Apichatpong said, "Some brutal memories and negative ones just happened. Film is like therapy. It looks at [the past] in a nonjudgmental way… In Thailand, there’s a certain kind of ignorance in the air. You just accept… There's this sense of casualness in the film. But it also reflects something darker."

Next: "My duty is to express my wavelength"

Often referred to as a "mysterious" man who makes "mysterious" films, partly as a playful reference to the title of his feature debut Mysterious Object At Noon (2000), Apichatpong has made films that compel audiences to look at films differently. To watch an Apichatpong film, Hui pointed out, viewers must abandon their basic understanding of narrative structure, logic, what is real/unreal, what is past/present, and when one is human/animal/spirit — but she also questioned if audiences too readily neglect the rich cultural and historical references that permeate the director's work.

The filmmaker responded that it is not understanding that he seeks: "A film has its own life. It's like a person. It has a certain charisma and a certain wavelength. You either have the same wavelength or not. For me, my duty is to express my wavelength… It's my memory, but at the same time, I hope it’s open enough to trigger your own experiences."

In a moment of contemplation, Apichatpong, whose films are infused with Buddhist philosophy, expressed doubts about filmmaking, once his ultimate purpose in life.

"With my interest in Buddhism, I always have conflicts… Filmmaking is about control. Many times you have to be very mean to be able to get the results," explained the filmmaker. For the director who is particularly interested in memories, he expressed conflicts between "remembering the past through filmmaking" and "living the present."

Looking into the future, the director contemplated a life in avocado farming as an alternative. But true to his core, Apichatpong quickly and enthusiastically turned to the subject of a new film idea which pays tribute to old science fiction films and involves a snow-capped landscape, a spaceship, and aged female scientists looking at the past.

Spaceship or jungle, past or future, film or avocado — time will tell where this young experimental wizard will take his next adventure.

Asia Society's Blissfully Thai film series is presented in association with Cineaste. Major support for this film series is provided by the Thai-US Partnership Program of Thailand's Ministry of Foreign Affairs, Thai Artists Alliance, and the New York State Council on the Arts.