"Without this face, I don't want to make films anymore." 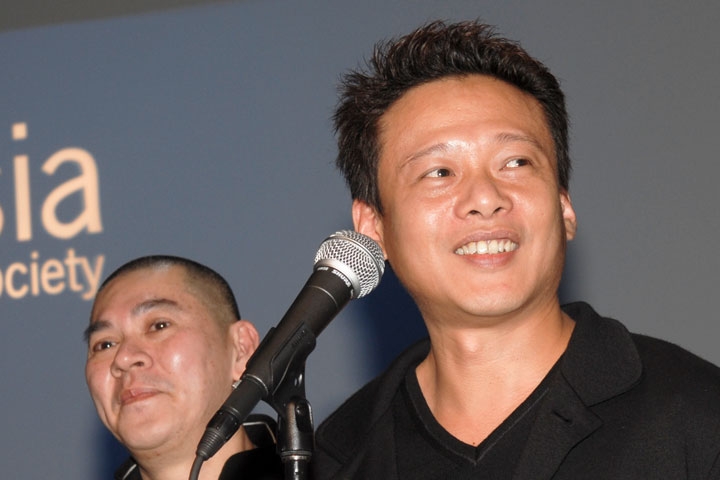 NEW YORK, November 15-17, 2009 — Malaysian-born, Taiwan-based filmmaker Tsai Ming-Liang and his long-term collaborator, actor Lee Kang-Sheng, met with the audience at the Asia Society's New York Center for the Faces of Tsai Ming-Liang film series (November 13-21, 2009). During discussions conducted by series curator La Frances Hui, Senior Program Officer of Cultural Programs, Asia Society, the director talked about how Lee's acting had altered his view of what constitutes a naturalistic performance. Tsai also revealed how he could not pull the camera away from the actor, and how he already anticipates capturing Lee Kang-Sheng's aging face.

Watch the video above to hear Tsai Ming-Liang and Lee Kang-Sheng's remarks, or read a full transcript below.

T: [Lee Kang-Sheng] didn't receive formal acting training. I found him on the street. He didn't have any acting concept. He just acts himself. I let him relax and act himself in front of the camera. It's very precious when actors are not acting in films. It's very difficult to be not acting. But the audience might ask, "Why isn't the actor acting?" I think it's a pity that the audience can't see the preciousness. To put it simply, when we take photographs, we are supposed to smile. It's not all right if we don't smile. People have preconceptions about how one should be like in front of the camera.

L: My acting rhythm is far slower than regular people. When I made the first TV drama with the director, he regretted using me after three days because even when I turned my head, I was half a beat slower than other people. So the director instructed me to turn my head. And then he told me to relax and be natural. But I was still half a beat slower. Later he became angry and asked, "Can you be more natural?" I became very anxious. The more I turned my head, the more unnatural I got. Later I told him, "I am just slow. Being slow is natural to me." Later on, he realized there could be many ways to act.

H: You introduced Lee Kang-Sheng to the world of cinema. But did he change the way you made films?

T: There are two levels. First of all, I felt enlightened. We are all selfish, selfish with the way we write screenplays, and selfish with the way we look at acting. "Acting should be powerful. Acting should be precise." We have these preconceptions as if the director must follow them clearly. But then I realized that this actor in front of me was acting himself. He didn't match our habitual standards [of acting]. I knew I had to think about this.

Because of Lee Kang-Sheng, I became more flexible. I shouldn't insist on this or that. It should depend on individual actors. How should I bring out the most natural from each? That became something very important to me.

On the second level, in the beginning, I didn't intend to film Lee Kang-Sheng in every film. It was perhaps fate that pulled us together. After shooting the first film, Rebels of the Neon God (1992), he got a strange illness. His neck was out of whack for nine months. That neck problem became part of the film, The River (1997). The nine months of illness pulled us very close together. I felt I was responsible. It must be related to the making of Rebels of the Neon God. The reference of the Neon God must have offended the God. So I accompanied him to see doctors for nine months. Our relationship became very close. During those nine months, I realized the body could be out of one's control. I saw the vulnerability of the body. I felt that's a powerful subject that I should be concerned with. A lot happened between us. Eventually, I realized I couldn't pull the camera away from his face. Observing this face became something very joyful in filmmaking.

T: (laughs) I am eagerly anticipating that. But I am filled with conflicts. I always tell Lee Kang-Sheng not to gain weight. Sometimes when I see him age, I feel very anxious. I am filled with conflicts. That sense of conflict is reflected in the way I handle my shots. I want to tell you one thing. It's because of this actor Lee Kang-Sheng that I gradually discovered the meaning of filmmaking. I finally have the opportunity to look at a face and its minute changes, the minute changes over time. These changes are irreversible. They reveal the truth of life ceaselessly. I am very fortunate to capture Lee Kang-Sheng. Without this face, I don't want to make films any more. (laughs)