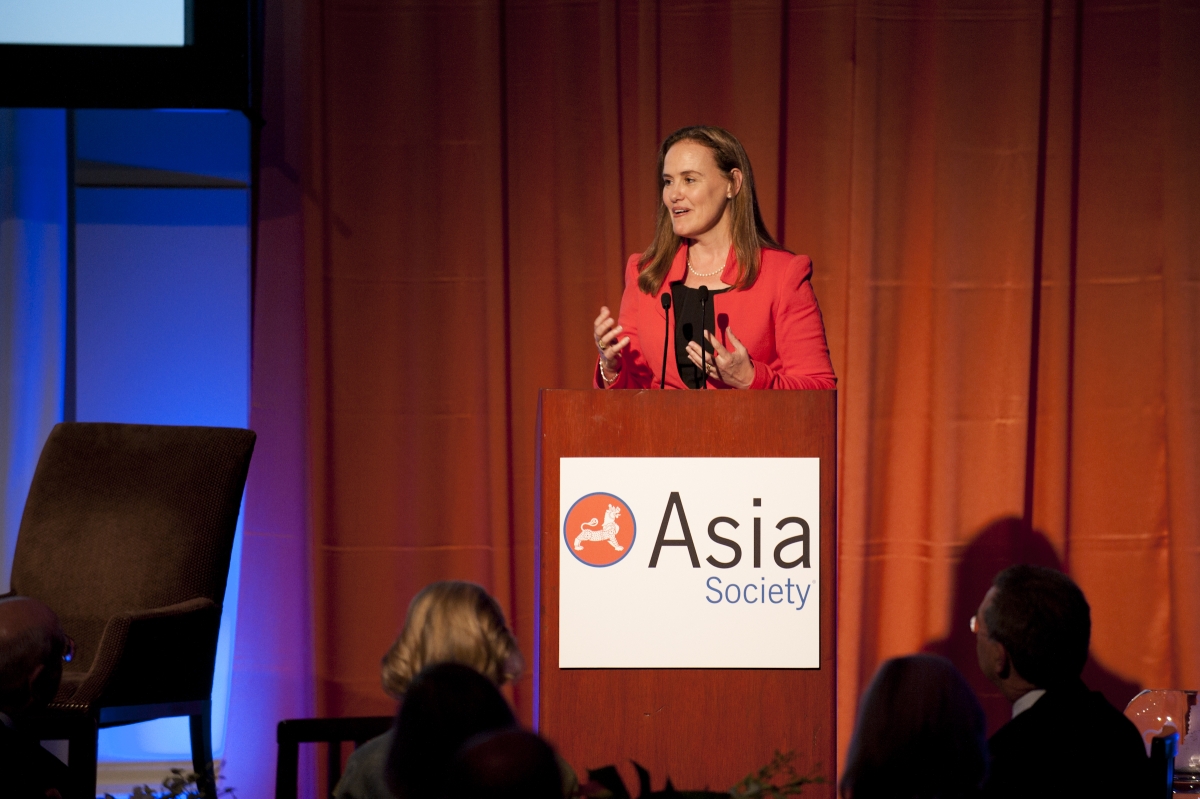 Former Under Secretary of Defense for Policy Michèle Flournoy was awarded the Policy Achievement Award at Asia Society's Washington Awards Dinner on June 19, 2012. The following is a transcript of her remarks on the future of U.S. engagement in Asia.

It's wonderful to be here, but I have to tell you that when I was first notified that I was being honored in this way, I said, "I'm willing to accept this award, but on one condition, and that is: I need to accept this award on behalf of a great team" — a great team inside the Department of Defense, a great interagency team, with friends like Kurt Campbell at the State Department and others in the White House.

As I said, this is a whole-of-government effort and we had great support working with the State Department, but also in the White House. And I think our supporter-in-chief in this regard was really the president himself. From the beginning, President Obama had a vision for where he wanted to take our national security in the future. He understood, I think, more than any of us early on, that we were at a strategic inflection point. We were coming out of the war in Iraq; we were beginning a transition in Afghanistan that would effectively end a decade-long focus on large ground campaigns in the broader Middle East. And, as that decade would come to a conclusion, on the horizon he was asking us all the questions: "Where should our focus be? Where will the future challenges lie? Where will the future opportunities lie?"

It was clear from the internal discussion, and clearly from his own internal inclinations, that the answer was first and foremost in the Asia-Pacific. It is the most important region to our future security as Americans and to our economic prosperity as Americans. As you all know better than most, it is the world's fastest-growing region. It is home to more than half of the global economy, half of the world's population, most of the world's nuclear power, and so much potential.

I really wanted to take a minute and quote from when the president went on one of his trips to Asia and spoke to the Australian Parliament. He said a few things that really I think crystallized the vision that this strategy is aiming for. He said:

As a Pacific nation, the United States will play a larger and long-term role in shaping this region and its future by upholding core principles and close partnership with allies and friends…

And when it came to identifying what are our actual objectives, he said:

We seek security, which is the foundation of peace and prosperity. We stand for international order — international order in which the rights and responsibilities of all nations and all people are upheld; where international law and norms are enforced; where commerce and freedom of navigation are not impeded; where emerging powers contribute to regional security; and where disagreements are resolved peacefully.

I think for all of us in this room, that's a shared vision — for most, if not all of us. So our job in DoD was to think about how to make that vision real, how we do our part to support that.

And I think everybody agreed that across the United States government, we had to be more present and more engaged in the region. In DoD it really meant realigning our military force posture — and by posture I don't mean bases per se, but really our activities, our engagements, our relationships in the region — to be more strategically relevant to the future, to be more operationally responsive to everything from potential disasters — humanitarian assistance types of situations — all the way up to the spectrum of conflict. And to make sure that our posture was politically sustainable in 21st-century Asia.

First and foremost, it meant that we had to spend more time on Asia. We had to invest more and, as [Ambassador Chan Heng Chee of Singapore] said, "broadening and deepening" our relationships in the region. It meant thinking hard about:

The strategy that was developed is now reflected throughout the DoD program and throughout our budgets. It has very much shaped how resources are actually being spent, how senior policymakers are actually spending their time. It enjoys tremendous buy-in across the administration and within DoD.

As someone who has survived many, many defense reviews — and there are some others like [Kathleen Hicks] who have the survivor badge as well — this one was very different, this recent strategic review and process. Given the incredible budget pressure we're under, the president decided to get involved along with the secretary, and there were hours and hours and hours spent with the president, the secretary, the chairman, all of the service chiefs, and all of the combatant commanders as a sort of corporate leadership, in the best sense of the term, to say: "We're going to take off our parochial hats, and we're going to come to the table as national security leaders and we're going to try to figure out where does this country need to go in the future." And it was a remarkable process that at the end of the day had tremendous buy-in from leadership across the board.

And I think that as [Congressman Adam Smith] mentioned, I think there is strong bipartisan support for the general thrust of the strategy as well, and I hope that it will continue to have that support and have a lasting impact on U.S. national security.

I would like to take one moment to make one more additional point, because I think that, as I have traveled around the region, there is something that really, really worried me and is really pernicious. That is a growing narrative about U.S. decline. I don't buy it, objectively, or in any other sense, but it is there. And as I drew people out and asked, "Why do you say that? What is really leading you to believe that?" they talked about the political paralysis that we are experiencing in this country. See, now that I'm out of government, I can say these kinds of things because I can only get myself in trouble.

The political paralysis that we are experiencing in Washington and the tremendous polarization — the world is watching. This is not about just the harm it does to our own citizenry, but the world is watching, and I think that one of the things that I fervently hope for is that we can get back to a place where our finest traditions come into play — traditions of American pragmatism, traditions of American problem-solving for the American people, traditions of compromise — which is not a dirty word. Compromise is what our constitution was based on; it is what our system of government is based on, and it is what is needed to move us forward in this difficult era.

We have set a wonderfully promising direction and I think it is incumbent upon all of us in this room and many others in this town to ensure that we can actually move through some of the current challenges we face, and realize the full potential of a deepened American partnership with the Asia-Pacific.

Let me conclude. I'd like to raise my figurative glass to all of my teammates who had a hand in really making this shift in our national security strategy possible, but also to the Asia Society for the incredible role that you have played — the invaluable educational role, the invaluable role in building those bridges and those partnerships for so many years, and really for contributing so many of the insights and the intellectual capital that we in government were able to utilize to put in place a strategy for sustaining American global leadership and American leadership in the region.

Thank you so much for the honor.