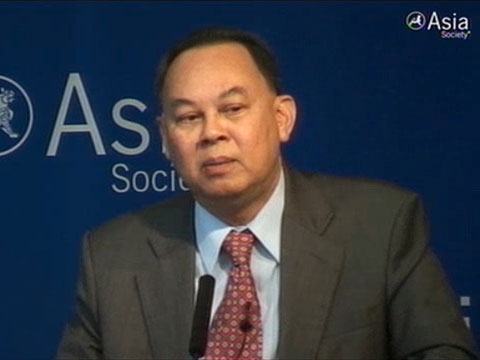 NEW YORK, September 28, 2010 - Thailand's Foreign Minister said Tuesday its people are committed to the development of democracy and they reject the recent violence that has inhibited the nation's progress over the last few months.

Speaking with Associate Fellow Sheridan Prasso at Asia Society New York headquarters, Foreign Minister Kasit Piromya said his government was investing in political, economic, and social solutions to counter the nation's longstanding instability, which has been marked by a series of coups. The most recent coup overturned the government of Prime Minister Thaksin Shinawatra in 2006. In addition, this spring, supporters of the ousted prime minister staged protests which ended in violence and a military crackdown.

In order to promote reconciliation, Kasit said that his government would consider granting amnesty to certain members of Thaksin's dissolved political party, but the foreign minister was firm that there would be no compromises made for those who committed “outright criminal acts."

Kasit defended his government's handling of democratic values and maintaining freedom of the press and claimed “freedom of expression [in Thailand] was second to none.”

Thailand has come under fire for suppressing freedom of expression, most recently after the second arrest of Chiranuch Premchaiporn, webmaster for the Thai news portal Prachatai Online. Premchaiporn was detained after allowing critical comments on the website that allegedly violated Thai law.

Asked whether the type of amnesty considered for members of Thaksin’s party might be extended to editors of online media, Kasit drew a distinction between the expression of opposing views and ideas that instigate violence.

“Is it just simply freedom of expression about a political ideology…or is it a determination to bring about confrontation, a bloody one, a violent one?”  he said. There would be no compromise for media that “incites hatred," he added, saying that matter would be decided by the courts, not the government.

“There is a criminal procedure and I think our justice system has high integrity. You have to respect our judicial system also,” he said.

Meanwhile, Kasit expressed his support for the scheduled elections in neighboring Myanmar, saying that they represented an important first step toward democracy in that country.

“Now they [the Burmese people] are being given a first step back towards an open democratic society,” he said. “Let’s encourage, let’s help them as much as possible.”