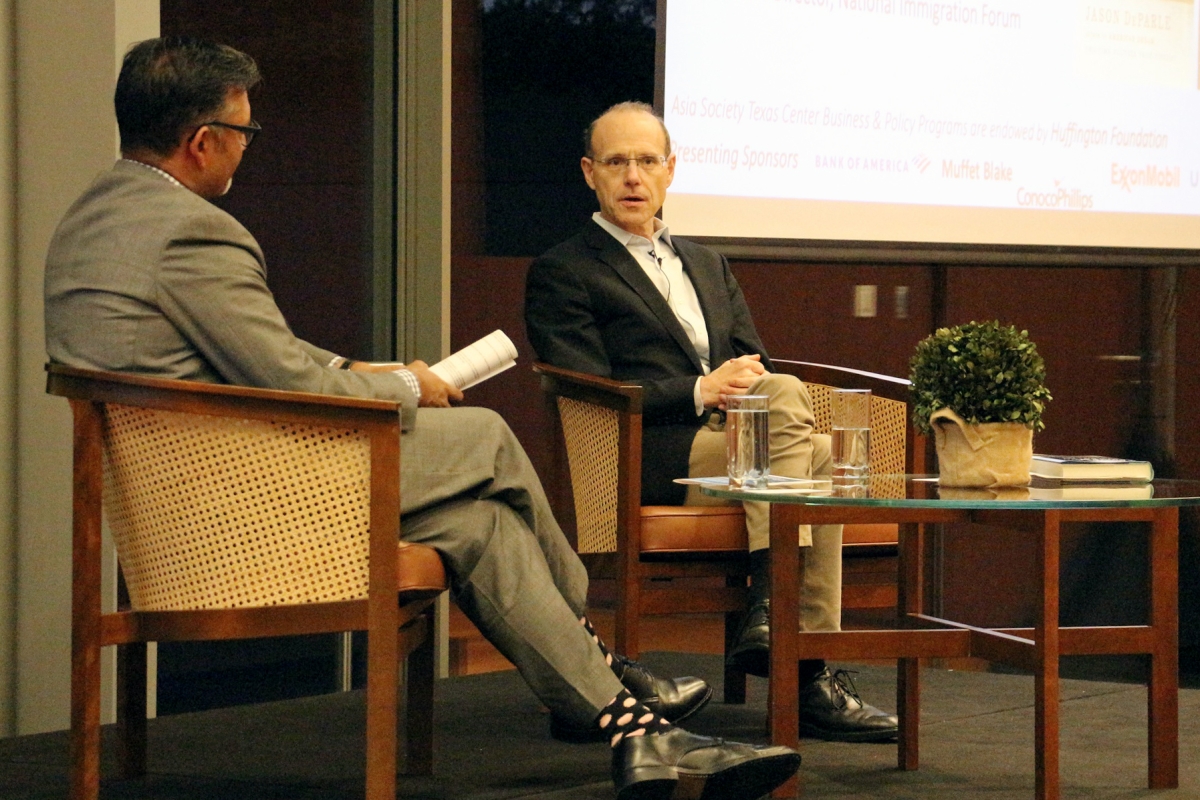 HOUSTON, October 28, 2019 — New York Times reporter and author Jason DeParle spoke at Asia Society Texas Center about his new book on global migration, A Good Provider Is One Who Leaves. In conversation with Ali Noorani, executive director of the National Immigration Forum, DeParle shared the insights and stories he gained from following one Filipino family over 30 years from a shantytown in Manila to the Houston metro area.

In a family of 11 children, Emet Comodas and eight of his siblings became overseas workers. DeParle noted that Comodas made 10 times his income as a pool cleaner when he moved to Saudi Arabia to do the same work, helping him send remittances to support his family. Following his example, all five Comodas children became overseas workers, including daughter Rosalie, who eventually became a nurse in Galveston, Texas.

DeParle explained that the Philippine society is built around migration, comparing its economic importance to the country to the importance of the automotive industry to Detroit. Remittances from overseas workers are such a critical part of the Philippines’ GDP that DeParle recalled passing a bank proudly displaying the year’s total remittances across the front of the building. The costs to the family of sending one member overseas for often years at a time are measured against the benefits of being able to support one’s children through school or to build a concrete house rather than a mud hovel.

A longtime reporter on poverty, DeParle said his decades-long relationship with the Comodas family gave him a new perspective on the issue at both a global and local level. Additionally, he said he believed the family’s story is important to spotlight in current discussions of immigration as a story of successful integration and blending of cultures. In a recent New York Times Magazine article, DeParle described in detail the rapid assimilation of Rosalie’s children into American life and culture, thanks to the influences of school, television, and the world around them, after they moved to Texas.

Rosalie, her husband, and their three children were in the audience. When asked to comment on DeParle’s book, she said she hoped readers would better understand the hardships experienced by the families of overseas workers. She said she was lucky to be able to bring her family with her to Texas, where they have had a new life.

DeParle shared photos of the shantytown where he had first met Rosalie and her parents in 1987, then compared it to the photo of her three children in front of the house they now own in the Texas suburbs. Each of the children has their own room, and the garage alone is larger than the space where Rosalie had lived with her parents and four siblings.

“They accomplished in three years what used to take 30 years,” DeParle said.