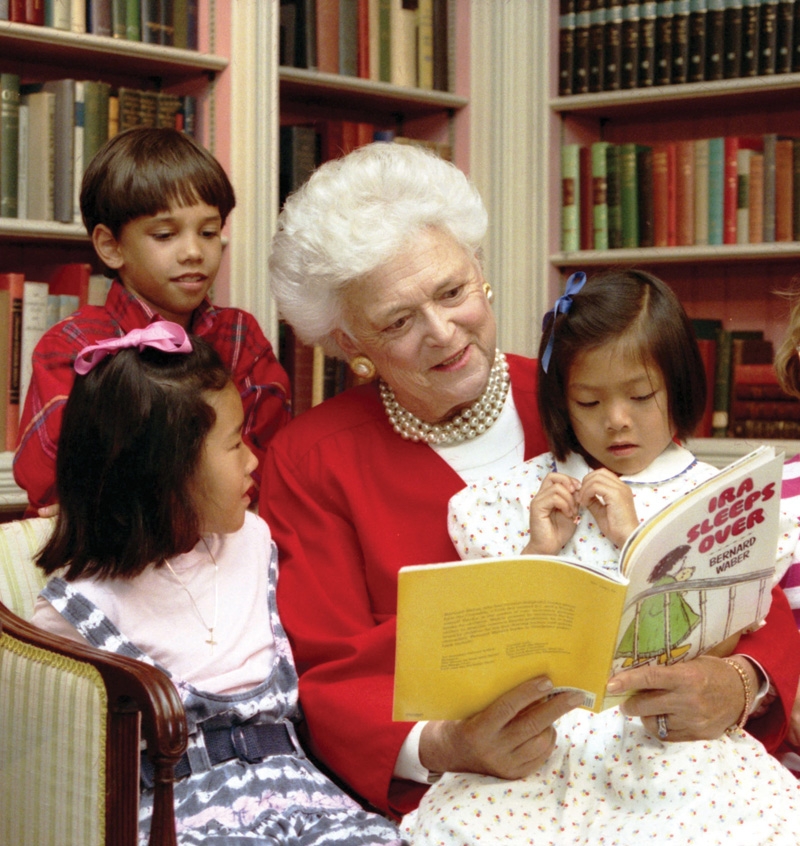 HOUSTON, April 18, 2018 – First Lady Barbara Bush passed away on the evening of April 17 at the home she shared with the 41st U.S. President George H.W. Bush in the Tanglewood neighborhood of Houston. Mrs. Bush was the only woman in U.S. history to be the wife of one president, the mother of another, and the mother of two governors. Along with former U.S. Ambassador Roy M. Huffington, she helped establish Asia Society Texas Center in 1979. She was also honored with her husband in 1993 with the Texas Center’s Roy M. Huffington Award for Contributions to International Understanding.

Mrs. Bush’s family has a history of involvement with Asia Society’s global network. Her third son, Neil Bush, lives in Houston and serves on the Texas Center’s advisory board, in addition to supporting numerous programs over the years. Her husband, President Bush (41) delivered a keynote address at the Asia Society-organized Private Sector Summit on Post-Tsunami Reconstruction and Rehabilitation in May 2005, and her eldest son, the 43rd U.S. President George W. Bush, gave a February 2006 talk on U.S.-Asia relations at Asia Society in Washington, D.C., to mark the organization’s 50th anniversary.

She was active in the Houston community, even from the days when her husband was a U.S. Congressman for Texas’ 7th congressional district, the boundaries of which lie just a few blocks away from Asia Society’s Houston location. She left a profound and lasting legacy as an advocate and fundraiser for literacy, launching the Barbara Bush Foundation for Family Literacy. In addition, after the family’s experience with cancer (one of her six children, Robin, died of leukemia just before her fourth birthday), Mrs. Bush became quite committed to cancer research, raising millions of dollars for research and treatment and serving on the University of Texas M.D. Anderson Cancer Center board in Houston.

Long-time Texas Center Chair and Bush family friend Charles C. Foster commented, “Along with her husband, Barbara Bush was an extraordinary force for good in the Houston community.” Mayor Sylvester Turner said in a statement, “[She] was best known to the world as the wife of a president and the mother of another, but in Houston we also knew her as a local leading light, an achiever in her own right who spoke and acted from the heart and the gut.”