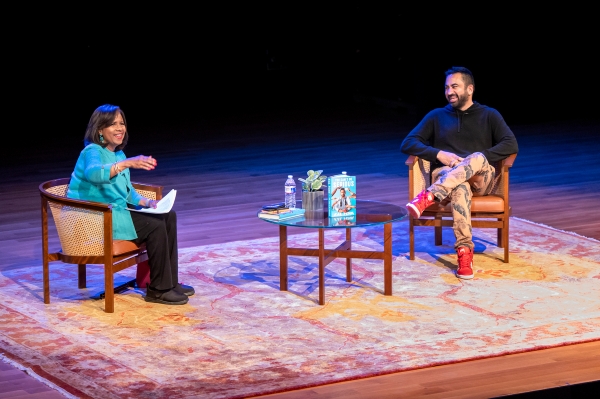 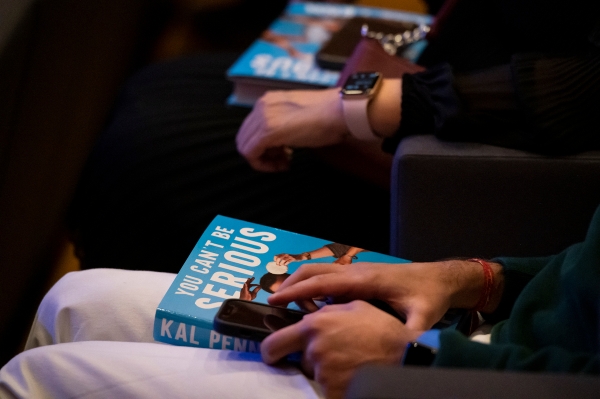 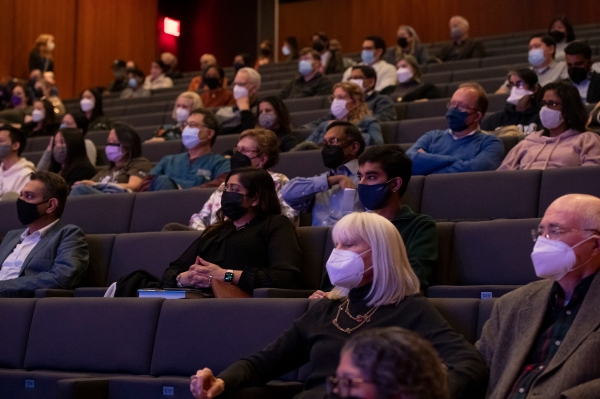 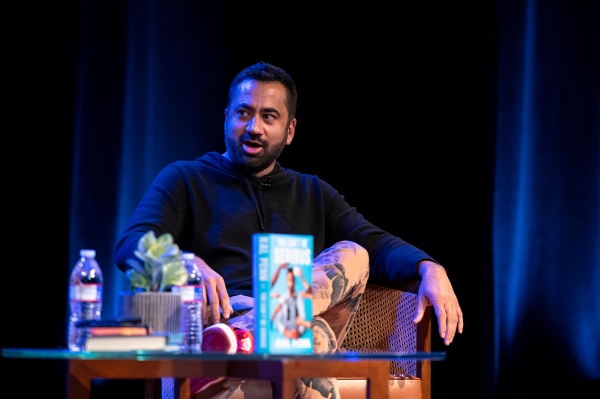 HOUSTON, January 15, 2022 – Asia Society Texas (ASTX) warmly welcomed actor, writer, producer, and former Associate Director of the White House Office of Public Engagement Kal Penn to Houston to discuss his new memoir, You Can’t Be Serious. In conversation with moderator Melanie Lawson, ABC 13 anchor and ASTX board member, Penn shared highlights from his career, ranging from his early struggles in Hollywood to his stint in the Obama administration. Attendees were able to purchase signed copies of Penn’s book at the event from partner bookseller Brazos Bookstore.

In describing his memoir, Penn said it was a book about systems change (understanding and addressing the root causes of social problems) and was written for his 22-year-old self, and others like him, to help navigate the challenges of the world and reflect on the shifts over the past decades. Penn discussed with candor and humor the expectations for Indian Americans as he was growing up — going to an Ivy League school and becoming a doctor — and the skepticism and worry that met his interest in pursuing acting — at UCLA! He explained that he understands now that his parents, new immigrants to the country, simply wanted financial security for their children and couldn’t conceive of a future where such success and security could be guaranteed through acting.

Penn went on to share the struggles in his early days in Hollywood, looking for roles beyond Indian or Asian stereotypes. He described going to countless auditions where directors were particularly looking for actors who could do an Indian accent, and how Penn — despite not having an accent — would be asked to put one on for the role. He spoke about occasionally pushing back, hoping to take on roles that could better represent Indian Americans on television in memory of the teasing he had experienced as a child, but he acknowledged having to balance the need to pay rent and add credits to his resume with his aspirations for better representation.

His role in Harold and Kumar helped change the trajectory of his career, Penn said, though he shared that he was certain the script would never sell — until it did. He pointed out that the film was considered a box office flop until it became a cult favorite following its release on DVD. While he said the script was incredibly funny, which is why he signed on, he also said he believed that because the film was headlined by two Asian American men, it had to be 1,000 times funnier to succeed. He expressed gratitude for those who had come before him in the industry, with fewer opportunities, who helped make his own career possible as attitudes shifted.

Road to the White House and beyond

Regarding the other portion of his career, Penn described with humor the first time he met then-Senator Barack Obama at a campaign event in 2007 and how he was outsmarted while attempting to outsmart Obama with a question on his biofuels policy. Penn went on to share how he was reassured, at the end of his interview process with the administration, that his job with the White House came in spite of his career as an actor, not because of it. In government, he said he learned patience and that some things work slowly on purpose, but also what was possible to achieve despite all the polarization.

Near the end of the program, Penn took a few questions from the audience, sharing that while his first love is acting, he remains interested in public service and hopes to stay involved — and confessing that his long-term dream job is work in the diplomatic space. He also spoke about the increased racist targeting of Asian immigrant and Asian American communities over the past two years, and said how for him it illustrated the importance for different communities to show up for each other and valuing intersectionality.

Optimism for the future

In a personal moment, Penn confirmed his recent engagement to his partner, Josh, of more than 11 years, and shared his family’s incredible support of his relationship. The support now applies to his career as well, Penn said, to the point where his family members were advising new generations of parents that acting, or other passions, could also be a sustainable and successful career.

Penn also acknowledged that there is no singular answer on how to deal with discrimination or challenges around race, but shared his optimism around the incredible diversity of work available now for people to follow their passions, to write, create, or achieve things separate from their identity.

Asia Society Texas believes in the strength and beauty of diverse perspectives and people. As an educational institution, we advance cultural exchange by celebrating the vibrant diversity of Asia, inspiring empathy, and fostering a better understanding of our interconnected world. Spanning the fields of arts, business, culture, education, and policy, our programming is rooted in the educational and cultural development of our community â€” trusting in the power of art, dialogue, and ideas to combat bias and build a more inclusive society.