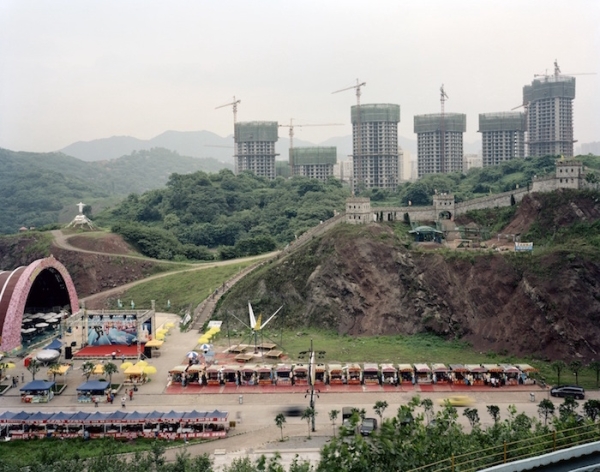 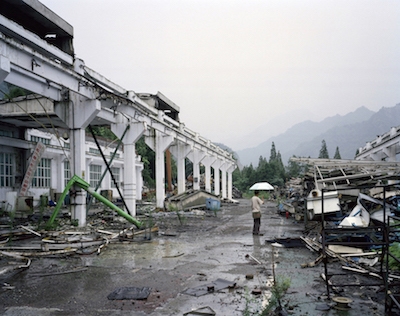 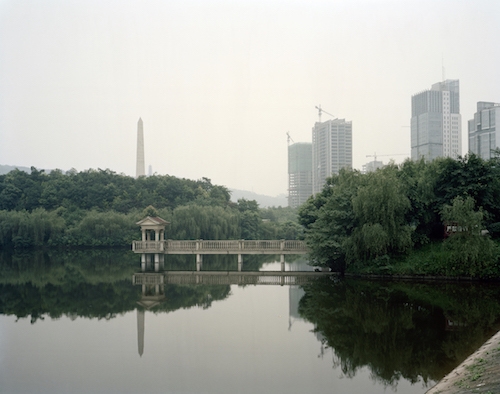 In his photography and films, artist Bo Wang explores the economic and political dynamics of China from the perspective of a Chinese artist now living in the U.S. His series Heteroscapes looks at the surrealistic transformation of his hometown Chongqing, as it makes way for an ambivalent future.

Wang’s work is currently featured in Asia Society Texas Center’s current exhibition We Chat: A Dialogue in Contemporary Chinese Art. At a reception celebrating the exhibition, Wang spoke to Bridget Bray, the Center’s Nancy C. Allen Curator and Director of Exhibitions, about his work and process. In the subsequent interview below, he elaborates on his experience of returning to Chongqing, the landscape photography of Heteroscapes, and his next project.

What is the main theme presented in your work, and can you discuss where the series title Heteroscapes came from?

BW: The series title Heteroscapes was inspired by Foucault's concept of heterotopia, which he refers to as the region between real space and imagination/desire. The project is a contemplation on contemporary Chinese landscapes to observe the traces of the intense social transitions in the past 30 years in China and to read the desire and fantasy the country has gone through.

Your photographs depict your hometown Chongqing during a time of intensified transition. What was it like growing up in such a tumultuous time?

BW: Actually, I was indifferent when I was young. I was born in 1982, almost the beginning of the economic reforms, and more intense changes happened during the 1990’s. As a kid, I took the rapid changes around me for granted. It was only when I had grown up and moved to the U.S. that I realized how much change had happened during the time I grew up.

After you left Chongqing and then returned, what were the most striking differences you noticed?

BW: I noticed mostly subtle things. From the things I was already familiar with, I noticed how the city was so unique in its geography. It’s vertical and hilly with many buildings built almost on cliffs. I also noticed how the layers of history are so visibly juxtaposed.

What do you hope visitors will take away from your work (regarding urbanization, globalization, the city of Chongqing, etc.)?

BW: To some extent this project is quite personal. Many of the scenes echo my personal memories. It's hard to know what visitors could take away from this body of work. I guess it's first an aesthetic experience and then an impression of the contradictions that tell the story of social changes and the recent history of the country.

Since Heteroscapes, you’ve branched out to other media, including the film China Concerto about public spectacles. How has Heteroscapes influenced your work, and what’s next?

BW: As a landscape project, Heteroscapes deals with the way of looking. Landscape is about the politics of looking — where to stand, what to look at, what to include and what to exclude. These are all the most fundamental issues photography needs to solve. China Concerto is also about looking and about the part of politics and the manipulation of power that could be read in public space. In a way, it's an extension of my way of looking at contemporary China. I have several projects going on right now. The major one is an essay film about urban space in Hong Kong and how it could reflect the new global order in the new era.